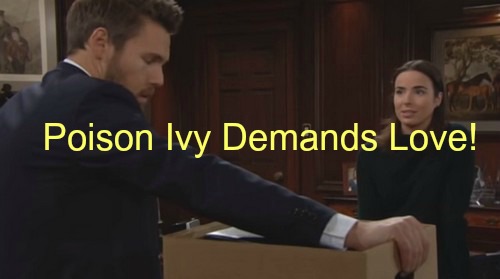 “The Bold and The Beautiful” (B&B) spoilers indicate that the electrical shock incident has forced Ivy Forrester (Ashleigh Brewer) to confront some feelings she’s been holding back. Ivy wants Liam Spencer (Scott Clifton) to give her another try and flat out told him that she loved him.

The Friday, December 18 show ended with a cliffhanger kiss where it looks like Liam is unsure about kissing Ivy back. It looks like he will, but that’s only to get Ivy to consider revoking the restraining order. But this whole love declaration impacts a lot of people.

First, Liam is still engaged to Steffy Forrester (Jacqueline MacInnes Wood). But you can’t really feel sorry for Steffy since she stole Liam right out from under Ivy and has been a jerk about it ever since. Steffy isn’t the most sympathetic figure in town.

Second, though, Wyatt Spencer (Darin Brooks) will be crushed. He had just gotten past the revelation – courtesy of Steffy – that Ivy was fooling around with Thomas Forrester (Pierson Fode). That was physical cheating – but telling Liam that she loves him is emotional cheating.

Third, Thomas was developing real feelings for Ivy as well and he’ll be stunned to hear that he wasn’t foremost on her mind after Wyatt – it was Liam all the time. No doubt Liam will come clean to Steffy at some point – and she’ll be furious.

Steffy will definitely run to Wyatt with the news since this is a much bigger deal than Ivy kissing Thomas – and she couldn’t wait to spill that. Steffy will also fill her brother Thomas in on this. But how Steffy handles the revelation could also impact how Liam handles it.

Ivy has pointed out a bunch of hard facts to Liam about Steffy – how she’s a manipulator and very aggressive while Liam is much more laid back and a good guy. Steffy is a hard-core troublemaker who does what she wants without a thought for the consequences.

Liam has thought about these things recently, but Ivy’s words may cement them. Plus, Liam is a peacemaker by nature and very empathetic. He knows that Ivy had a near-death trauma and is shaken up emotionally.

Liam may assume this is all about the accident and that she’s working through things. Plus, there was the second incident with Steffy where Ivy struck her head. Liam will see the big picture and give Ivy the benefit of the doubt and try to work this out for everyone.

But Steffy has no empathy for Ivy and will just go on the attack. And that could do more to damage her relationship with Liam than Ivy’s love confession. Will Steffy’s antics drive Liam into Ivy’s arms? What do you think B&B fans? Should Liam be with Steffy or Ivy?