BY Stormy Elizabeth on December 21, 2015 | Comments: one comment
Related : Soap Opera, Spoiler, Television, The Bold and the Beautiful 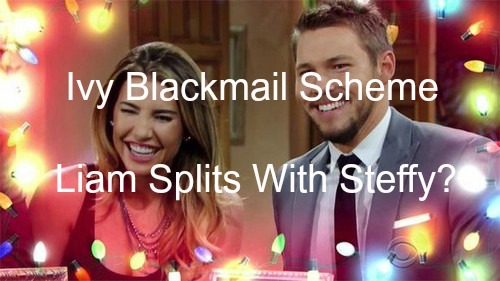 “The Bold and The Beautiful” (B&B) spoilers reveal that by Monday, December 21, Ivy Forrester (Ashleigh Brewer) is ready to drop the restraining order against Steffy Forrester (Jacqueline MacInnes Wood) but what was the cost to make this happen and who paid the price?

Ivy told Liam Spencer (Scott Clifton) that she would drop the restraining order in exchange for him giving their love another try. This left Liam with a conundrum. He knows how upset Steffy was to be hit with the TRO that would have kept her out of Forrester Creations.

But on the other hand, they are engaged and so taking up with Ivy could blow that up. Will Liam agree to give Ivy another try, but only so long as it’s a secret between the two of them? Liam may plan to get Ivy to drop the restraining order then string her along for a couple of days.

However there are some problems with this scheme. If Liam comes clean to Steffy about Ivy’s love blackmail, Steffy will go nuts and Ivy might not drop the TRO. Steffy cannot keep a secret for even a hot minute (unless it’s her own secret) so Liam likely can’t tell her.

And if Ivy thinks Liam isn’t really giving them another chance, she won’t drop the TRO, so Liam will have to work hard to convince her that he’s really reconsidering them as a couple. But, along the way, could Liam find his feelings for Ivy aren’t as much in the past as he thought?

Liam told Ivy before that he fondly remembered their time together, but that was in the past. How much will it take to remind Liam that he and Ivy shared a real passion for each other and genuine love? Could Liam’s play acting turn into real emotion?

There’s also the question of whether Ivy is off the rails right now. She just had a gazillion volts coursing through her brain plus the second incident where she whacked her head. Is Ivy’s brain off? Could she be suffering side effects from the incident?

Will Ivy comes to her senses soon and realize it’s not Liam she wants? But will she have already wrecked Liam and Steffy’s engagement by then? Ivy should be recuperating but instead she’s scheming and may be off her rocker while doing so.

Is all of this just a manifestation of a brain injury? Or is Ivy really convinced that she and Liam should be together? And once Steffy finds out that Ivy has demanded Liam reconsider their relationship as a condition of dropping the TRO, what will she do?

Will Steffy let it go on because it’s a chance to get her job back? And if Steffy does allow it, will that make Liam think she doesn’t love him enough to fight harder for him? This whole situation is a mess, and it’s a mess of Steffy’s creation.

How far will Liam and Ivy take this? Will Liam bed Ivy when he gets caught up in the moment? Will Ivy’s love blackmail cost Liam his engagement to Steffy and relationship with his brother Wyatt Spencer (Darin Brooks)?

Is Ivy brain-addled or just devious? Does Ivy know exactly what she’s doing and is leveraging Liam’s sympathy for her injury and guilt over what Steffy did to her to break up his engagement? B&B fans, share your thoughts in the comments below.

And be sure to check back with CDL often for more “The Bold and The Beautiful” spoilers, gossip and more.