The Bold and The Beautiful (B&B) Spoilers: Steffy Loses FC Presidency for Violating TRO – Rick and Maya Move for Takeover?

BY Sean O'Brien on December 20, 2015 | Comments: one comment
Related : Soap Opera, Spoiler, Television, The Bold and the Beautiful 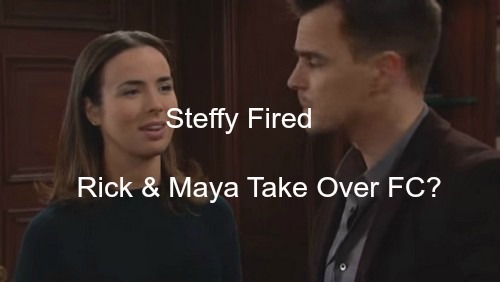 “The Bold and The Beautiful” (B&B) spoilers indicate that Steffy Forrester (Jacqueline MacInnes Wood) may have put her role as President of Forrester Creations on the line when she knowingly broke the restraining order that Ivy Forrester (Ashleigh Brewer) had taken out.

Steffy barely escaped arrest at the hands of Lieutenant Baker and still has a court date set to answer for violating the order. Steffy may yet end up either behind bars for continuing to ignore the TRO – but it’s just as serious is if the restraining order is made permanent.

Liam Spencer (Scott Clifton) is trying to work things out with Ivy, but if he can’t talk Ivy out of pushing Steffy out of Forrester Creations, she may have to pack her things and go for good. Let’s be real – Steffy cannot function as President of the design house working from her couch.

If the restraining order is for keeps, there will be a power vacuum created at Forrester and you know Rick Forrester (Jacob Young) and Maya Avant (Karla Mosley) will eagerly step up to fill it. It won’t be lost on Eric Forrester (John McCook) that Steffy can’t lead the company if she’s not present.

Also, Eric can’t get Steffy back by firing Ivy for taking out the TRO. In fact, if he tried that, Ivy would have a huge lawsuit against her family’s company for wrongful termination – and that’s on top of being able to sue them for negligence in the wiring that nearly got her electrocuted.

We know Rick wants to be in Steffy’s seat – he’s been eager to get back to running Forrester Creations and Steffy’s legal troubles are the perfect excuse. Even if Ivy drops the restraining order voluntarily, Steffy’s actions have tarnished her reputation – perhaps irreparably.

Can Eric trust Steffy to run the company when she can’t maintain a semblance of order in her personal life? She has shown herself to be capable of such a lack of control that she hurt Ivy twice – once in a near death scare plus there’s still the Aly Forrester (Ashlyn Pearce) issue this brought up again.

Not only is Ivy down on Steffy, but Wyatt Spencer (Darin Brooks) is taking her side. If Rick and Maya also start casting aspersions about Steffy’s inability to run Forrester Creations and her penchant for violence, could they sway Eric to oust her?

Maya and Rick are so close to having everything they want in life. They’re married, they have won widespread acceptance of Maya’s complicated personal history, and have a baby on the way thanks to Nicole Avant (Reign Edwards).

If they can wrest control of Forrester Creations from Steffy, they’ll have it all. Steffy may have unwittingly handed Rick and Maya the keys to the kingdom when she shoved Ivy into the electrical system and almost killed her.

But it looks like – when all is said and done – Steffy may be the one who’s shocked! What do you think B&B fans, is Forrester Creations ripe for a takeover by power couple Rick and Maya? Do you want to see Steffy running FC or Rick and Maya?

Be sure to check back with CDL often for more “The Bold and The Beautiful” spoilers and news.