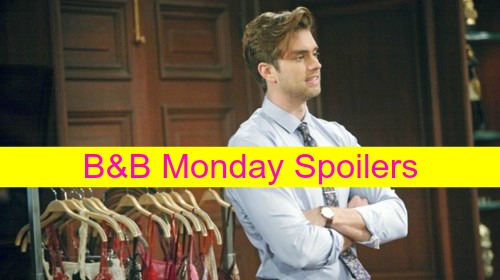 “The Bold and the Beautiful” spoilers for Monday, October 26, tease that Julius (Obba Babatunde) will try to convince Nicole (Reign Edwards) that she’s making a huge mistake. Julius will rant about how Maya (Karla Mosley) is pressuring Nicole to act as her surrogate.

It seems Julius believes Maya has set an utter disaster in motion. Nicole will stand up for herself and insist that she knows what she’s doing.

Since Julius can’t order Nicole around anymore, he’ll try a different tactic to get her to do what he wants. “The Bold and the Beautiful” spoilers say Julius will argue that Nicole could lose Zende (Rome Flynn) because of all this. Julius will ask Nicole if she thinks Zende is still going to want her after she’s “all stretched out and big as a house.”

Maya will try to shut down her father’s tirade, but that won’t make much of a difference. If Julius can’t help Nicole see his point of view, he’ll just start working on Zende. When Nicole told Zende about her decision to carry a baby for Rick (Jacob Young) and Maya, he told her he understood.

Nevertheless, Zende would be lying if he said he didn’t have some reservations. Down-the-road spoilers indicate that Julius will try to play up those doubts. Zende could begin to wonder if he can truly support Nicole through the surrogacy.

As for Nicole’s mom, she’ll definitely have a few doubts of her own. However, Vivienne (Anna Maria Horsford) will try to be a little more sensitive about how she discusses the issue. Vivienne will take Nicole aside and suggest that life is full of chances that can easily pass you by. Sometimes you don’t even know you have those chances until it’s too late.

Nicole would love to help Maya, but she may want to mull over this sacrifice a bit longer. B&B rumors say that Nicole will try stick to the agreement, but it could prove difficult as the process moves forward.
Meanwhile, Caroline (Linsey Godfrey) will face an uncomfortable situation.

Now that Thomas (Pierson Fode) knows Caroline’s pregnant, he’ll inevitably have questions. It looks like Thomas will start hinting that Caroline may not know who the father is. Caroline will pretend to be stunned that Thomas would imply such a thing.

Of course, Thomas has every right to be suspicious. How much longer can Ridge (Thorsten Kaye) and Caroline keep up this charade? Stay tuned to “The Bold and the Beautiful” to see when Thomas will learn the truth.

So B&B fans, what do you think about the news that Julius will try to convince Nicole to end the surrogacy plan? Will Julius start creating uncertainty for Nicole? What about the awkward conversation between Caroline and Thomas?

When will Thomas get updates on the fact that it’s his child? Let us know what you think in the comments below and don’t forget to check CDL often for the latest “Bold and the Beautiful” spoilers, rumors, updates and news.

The Bold and the Beautiful (B&B) Video Promo for Monday, October 26