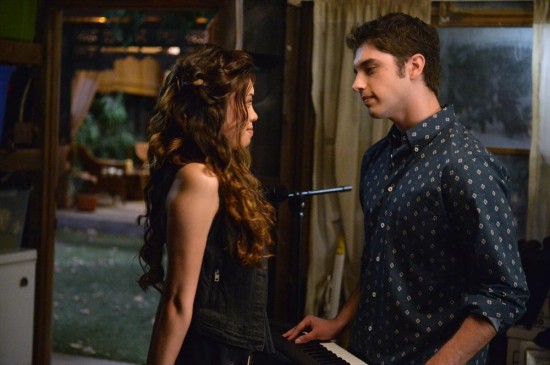 Tonight on ABC Family their hit drama The Fosters returns with an all new Monday January 19, season 2 episode 12 called “Over Under,” and we have your weekly recap below. On tonight’s episode, Lena [Sherri Saum] and Stef [Teri Polo] clash over several matters, including Lena quitting her job. Meanwhile, Robert’s change of heart confuses Callie [Maia Mitchell]; an ambulance arrives at the Quinns’ home; and Jesus [Jake T. Austin] is surprised by what he learns when he sneaks into Ana’s AA meeting.

On the last episode, Callie and Jude spent their first Christmas with the Fosters, Callie felt the sting of still being an official foster kid while Jude’s guilt over having been adopted had him overcompensating. Stef felt that Grandma Sharon’s (guest star Annie Potts, “Any Day Now”) gift giving was excessive, especially when she learned where the money was coming from. Lena had to face her own bias against another family member. Did you watch the last episode? If you missed it we have a full and detailed recap right here for you.

On tonight’s episode as per the ABC Family Synopsis, “as Callie tries to wrap her head around Robert’s change-of-heart, an ambulance shows up at the Quinn’s house. Stef and Lena find themselves on opposite sides of several issues, including Lena’s sudden decision to quit her job. Brandon is offered an opportunity to attend a prestigious summer music program. Mariana struggles when her dance team leader changes the lineup the day before the competition.”

Callie and Brandon never got their chance to make a mistake on tonight’s all new episode of “The Fosters” and unlike Brandon – Callie doesn’t regret the fact they were stopped in time. Their kiss was spontaneous and honestly it sprung out of sheer desperation more than any actual feelings – as Callie soon realized for herself when she became clear headed again.

Callie realized the two of them had crossed a line. And truthfully she’s always known better than to risk their family just to see if she can go back to Brandon again. Yet they kissed and now Callie was nothing more than to forget it.

It was an ambulance arriving at the Quinns’ house that had disturbed the two young lovers/ foster siblings. And not their own good sense. But, luckily, the ambulance seemed to have been called for prematurely. Robert had thought he was having a heart attack yet the medics told him a panic attack can often be mistaken for much worse.

So Robert got off lucky but that panic attack of his had also converted his wife to the idea that maybe Callie should come to live with them. Before, Jill thought her husband and daughter were growing too attached to someone that wasn’t going to be a part of their family. After all, everyone had seen how attached Callie was to her family. But then Robert had his panic attack and Jill got to see for herself how much Callie must mean to him. Hence she now wants to support her husband and that includes standing by his judgment when he told Stef they were going to be fighting for custody.

Stef and Lena had originally said they were going to give the Quinns some breathing room after the party ended up being a bust. Yet Stef felt like she had to fight for her family so she visited the Quinns without her wife’s knowhow and according to Lena – Stef must have made Robert feel like he was on the defensive if he could say something like that about Callie.

And that angered Stef because she felt like what Lena did to “protect” Jude was worse than her visit with the Quinns. Lena was the one that had quit her job when as it turns out Jude and his friend did mess around in their tent. And Mr. Stevens did have a right to be angry.

So for a while there, the wives weren’t speaking to each other. They each felt the other was in the wrong and no one wanted to make the first move. But a move was ultimately made by Lena. She went back to the school and had asked for her old job back which thankfully got without that much hassle.

But because, she’s back to being a school administrator, Lena has to do her job and hold a meeting with Mr. Stevens and his son Connor. And that wasn’t as bad as she thought it would be. Because all this time and what happened in the tent turned out to be two young boys sneaking a couple of girls in. So Mr. Stevens wasn’t angry – it just hit him that his son was growing up.

The only person that was angry was Connor. He was upset with Connor for telling his mother something had happened in the tent. Then he said he couldn’t be friends anymore with a little b*tch.

So Jude lost his friend when he couldn’t keep his mouth closed and Marianna lost a friend when she stayed silent right when Tia needed her to speak up.

It was the day of the competition and after trying to sabotage Mariana this whole time – the dance captain had wanted to remove her solo as well. Hence Tia stood up for her friend and quit when it looked like Mariana wasn’t going to get a fair chance. But Mariana hadn’t followed Tia’s lead – she decided to stay on the dance team and even saved it when they were confused about formation thanks to Tia’s abrupt departure.

And the dance team was good. Everyone was on par and Mariana didn’t even give in to her nerves simply because her family was watching.

But then again there was a master plan a work. For it seems Mariana didn’t betray her friend. She just needed qualify so that when she quit Caitlyn’s dance team and started her own with Tia – they still had a chance at Nationals. And when Tia heard the plan – she quickly agreed to join up with Mariana.

So in all in all, Mariana had a pretty good day and she just wished her twin was there to join in. Jesus hadn’t made it to the performance and he had told everyone it was because of a wrestling commitment. When the truth is he tried to attend an AA meeting for so that he could offer support to his birth mother.

But he hadn’t walked away from doing that at the last minute and didn’t have time to make it to the competition.

As for Callie, she finally saw how disturbed her sister Sophia really was. The young woman had actually tried to kill herself in front of Callie and so her sister had no other choice – called the Quinns. And now it’s up to them how they’re going to look after their daughter.

Afterwards, Callie tried to ask Brandon about his new relationship with Lou. So she asked him if he’s forgotten her and he told her “no” he hadn’t. But he wants to! It dawned on Brandon that Callie only ever comes to him when something doesn’t work out for her and he’s tired of being her fallback so he’s officially moving on or at least trying to. And Callie is simply going to have to live with.