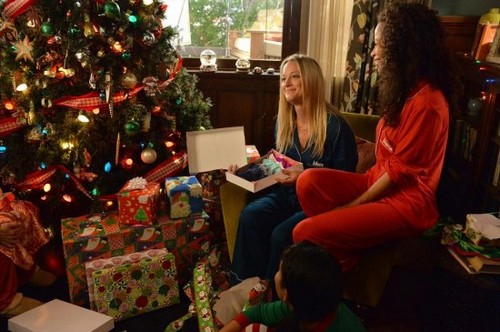 Tonight on ABC Family their hit drama The Fosters returns with an all new Monday December 8, season 2 episode 11 called “Christmas Past,” and we have your weekly recap below. On tonight’s episode, Christmas is celebrated by the Fosters, and Stef [Teri Polo] feels that Sharon is being overgenerous. Meanwhile, a neighbor accuses Jesus [Jake T. Austin] of cheating in a house-decoration contest; and Jude [Hayden Byerly] overcompensates with Callie to alleviate his guilt over having been adopted.

On the last episode in an effort to help Rita with a dilemma involving Girls United, Callie called in a favor from her wealthy biological father, Robert Quinn. But an unexpected betrayal threatened to derail the new bond she’s forging with the Quinns. Meanwhile, the pressure Connor faced from his father to end his friendship with Jude intensified and lead Lena to make a life-changing decision. The tension mounted between Brandon and Lou, despite their bandmate Mat’s warnings against drama. And a visit with someone from his past makes Jesus see his relationship with Hayley in a whole new light. Did you watch the last episode? If you missed it we have a full and detailed recap, right here for you.

On tonight’s episode as per the ABC Family Synopsis, “Callie and Jude spend their first Christmas with the Fosters, Callie feels the sting of still being an official foster kid while Jude’s guilt over having been adopted has him overcompensating. Stef feels that Grandma Sharon’s (guest star Annie Potts, “Any Day Now”) gift giving is excessive, especially when she learns where the money is coming from. Lena must face her own bias against another family member.”

Tonight’s episode of The Fosters kicks off with The Fosters decorating their Christmas tree.  A woman arrives and says she is from the Mission Bank Organization and they are delivering presents to all of the foster kids in town – Callie awkwardly accepts the present after Stef’s long-winded speech that they are all family.

Callie feels funny about receiving a “pity gift.”  Mariana reassures her that they all receive gifts even though they are adopted, they all open them on Christmas morning and then Stef and Lena make them donate them back to a charity.

Stef and Lena are going through old boxes and Stef gripes that she doesn’t see why she needs to hold on to her dead father’s bank statements.  While she is preparing to throw them away she is shocked to see that her Dad had a pension with over $150,000.00 in it – and the estate lawyer never mentioned it to her.  Lena is confused – if Stef didn’t inherit the money, then who did?

Brandon and Callie head to the store to do the Secret Santa shopping for Christmas day.  Callie stops by a fast food restaurant to visit her friend from the group home and pick up an application to work with her.  Callie’s friend reveals that DSS still won’t let her see her daughter even though she has done everything they told her to do – she confesses that she knows where her daughter’s foster care home is and she sits at the park and watches her play.  Callie lectures her that she is going to get in trouble for stalking and will never see her daughter again if she gets caught, she just needs to be patient.

A pile of packages arrives that Stef’s mother ordered and she puts them all under the tree.  Stef and Lena realize that the reason she could afford to spend so much was because she inherited the $150,000 from her father’s account.  Stef is livid – because she knows her father just never bothered to change the will and he would have wanted Stef and Lena to have the money because they have five children to support.  Stef’s mom Sharon doesn’t want to hear it and insists that they were married.  Stef reminds her that they were divorced when her father died and he couldn’t stand her – there was no way he would have purposely left her that much money.

Lena tries to talk some sense in to Stef and tells her that she is being petty.  Stef reminds her that she is just as petty because she doesn’t want to spend Christmas with her half-brother.  Lena argues that she and Nathan have different mothers, so it’s not the same, they aren’t really brother and sister.  Jude overhears their entire conversation and is obviously upset and storms out of the house.  Stef sees Jude leave on his bike and tells Lena that she needs to be careful what she says when they have a house full of adopted children.

Lena heads to Jude’s room to talk to him about what she said about being a “real family.”  Jude shows her the bracelet he got for Callie for Christmas, and Lena is surprised it is so nice because they only gave him $40 to spend on a present.  Meanwhile, Jesus and Mariana are competing in the Christmas decorations competition.  An old man freaks out on them and accuses them of sabotaging his decorations and accuses them of popping his inflatable snow man.

The next day Jude heads back to the store and tells the cashier he forgot to pay for the bracelet yesterday and returns it.  She tells him that it cost $100, and he explains he only has $40.  The cashier feels sorry for him and tells him that it is 60% off and he can have it for $40.  Jude pays for the bracelet and leaves.  Callie’s friend Daphne heads to the park to spy on her daughter, even though Callie warned her that it was a bad idea.

At the Foster’s house they all sit down for Christmas dinner together.  Lena surprises Stef with a present – a pair of diamond earrings.  Stef is upset, she can’t believe that Lena bought real diamonds and is concerned about how much money she spent.  Ste and her mother wind up in a screaming match over her dads money and her mom blowing it all.  Lena snaps on all of them and cries when she realizes that she burnt the lasagna.  Stef’s mom freaks out and gets a gift from under the tree and throws it at Stef – she opens it and realizes that her mom opened a $30,000 college investment fund for each of the five kids.  Stef cries and apologizes for the way she has been behaving.

After dinner Callie receives a phone call from Daphne and heads to the burger restaurant where she works.  When Callie and Brandon get inside they see that Daphne has her daughter Tasha, and kidnapped her from the park.  Daphne explains that she panicked and Callie tries to brainstorm up ideas to get her out of this before she goes to jail for kidnapping.  Brandon and Callie take Daphne to Tasha’s foster house, Daphne sends her up the steps and tells her to knock on the door.  She waits to make sure someone lets her in and then runs down the street to where Brandon is parked.

It’s Christmas morning at the Foster’s house and everyone gathers around to open their presents, Callie loves the bracelet Jude got her.  Lena steps outside to call her brother Nathan and make amends with him.  Brandon gets upset when Callie opens a present she got in the mail from Wyatt and goes outside.  Callie follows him outside and gives him the present that she got him.  They make promises to each other that no matter what happens they will always be there for each other.