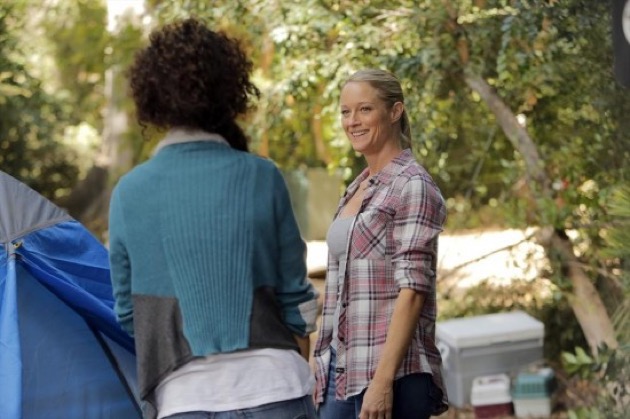 Tonight on ABC Family their hit drama The Fosters returns with an all new Monday February 2, season 2 episode 14 called “Mother Nature,” and we have your weekly recap below. On tonight’s episode, the family embark on a camping trip, but the kids aren’t too excited about it. Meanwhile, Jesus’ [Jake T. Austin] secrets are exposed; things get awkward between Callie [Maia Mitchell] and Brandon [David Lambert]; Jude [Hayden Byerly] grows annoyed with how others treat him; and Mike invites Ana to move in with him.

On the last episode Kiara from Girls United reached out to Callie when she was placed in an unfit foster home. Callie recruited Stef to help, but they soon found that getting Kiara out was not as straightforward as it seems. Mariana wa invited to join the STEM team at her school after she tested above her class but chooses to downplay her math scores to her boyfriend, Mat. Did you watch the last episode? If you missed it we have a full and detailed recap right here for you.

On tonight’s episode as per the ABC Family Synopsis, “the Adams fosters kids are not very excited to head out to the wilderness for a family camping trip, but Jesus shakes things up when he can no longer hold onto his secrets and gets a surprise visit. Callie and Brandon awkwardly navigate their relationship while Jude gets fed up with the way he’s being treated. Meanwhile, Mike asks Ana to move in with him.”

On tonight’s all new episode of “The Fosters”, Lena and Stef have decided to take their kids camping. Things around the house have kind of been hectic lately and they figured such an experience (away from their friends and in an enclosed friends) would allow their kids to both unplug and even share in some bonding time. However, on the way there, Lena suddenly found out she didn’t want to be part of the sharing.

Earlier, Lena and Stef were discussing their good parent and bad parent roles. And Lena took offence to the way Stef described her as the god cop. She said the kids didn’t always turn to her and she did not always go easier on them.

Then in the car, Jesus told her first that Anna was pregnant. And he also said he could only tell Lena because, you know, he figured she could help break the news to Stef who would automatically be the strict one. So, once Lena realized Stef might have had a point, she ended up helping their son but she also did something for Stef as well.

Lena told Jeus to pretend Stef was the first person he told and that way her wife wouldn’t feel like the bad cop and Stef would actually go easier on Jesus if Lena took on the sterner parental role later on.

And Lena was right. Stef was upset about Anna and possibly Mike having a baby, but she went easy on Jesus. Plus, it didn’t hurt that Lena actively tried to be the stricter one over the course of their vacation. Though, while she was doing that, Lena ended up being tougher than Stef.

Lena confiscated all their phones and forced the kids to hang out with each other. Which, as it turns out, came with consequences.

The kids did open up to each other but then they started to keep each other secrets. Take for example when Jude found out about Jesus’s tattoo and then helped him hide it from their parents. Or when Brandon found out that Hayley really was crazy after Jesus’s girlfriend followed them to their camping site and tried to invite herself along.

Brandon told Jesus to get rid of her and yet to do that he had to sneak away from their camping site in the middle of the night. So when he didn’t return in the next couple of hours – his brother began to worry about him. And Brandon eventually went looking for him on his own. But then Brandon didn’t return right away and Jude finally cracked and told their parents what was going on.

Jude told his moms that his brothers had gotten lost on their way to the bathrooms. And so the first place Lena and Stef checked was the bathrooms. Though, funnily enough, that’s not where they found the boys.

Unfortunately, they found the boys lost in the woods right after they found Hayley on her way to their camp. Then, afterwards, Lena and Stef had no other choice but to keep Hayley with them for it seems Hayley was only able to make the trip because her mom had went away for the weekend with a new boyfriend. So the Fosters decided on not returning Hayley to an empty house.

However, where’s the best place to put your son’s girlfriend?

So, yeah, Lena and Stef found themselves having to share their former and quite romantic tent with the annoying Hayley. And though no one liked the idea of having Hayley around – they at least attempted to make the best of it. Like Mariana trying to be friends again with Hayley and even discussing dancing tips with her. Yet, in spite of that, it didn’t take that long for Hayley to go back to her old tricks of creating havoc and mayhem.

And no matter what she says – she knew what she was doing when she told Mariana about Anna’s pregnancy. When Jesus had let her in on the secret he also mentioned how much the news was going to destroy his sister. So she did know what she was doing.

Later, after Mariana had freaked out and ratted on Jesus for having a tattoo to their parents (something he should have been upset about), Jesus found Hayley and broke up with her. Apparently, his breaking point was when she intentionally hurt his sister and caused his parents to argue. (Stef hadn’t liked hearing Jesus went to Lena first but Lena got him to lie about it)

And she really did hurt Mariana. Mariana was worried she would never get Anna out of her life now that she was having a family Mike but surprisingly Mike wasn’t the baby’s father. So, all that drama was actually for nothing.

Hayley left after Jesus broke up with her. And without that particular black cloud hanging over them, the Fosters ended up enjoying the rest of their camping trip.

And that goes for Jude as well. It seems everyone had been treating him like a baby so when he spoke up for himself – they respected him enough not second guess.