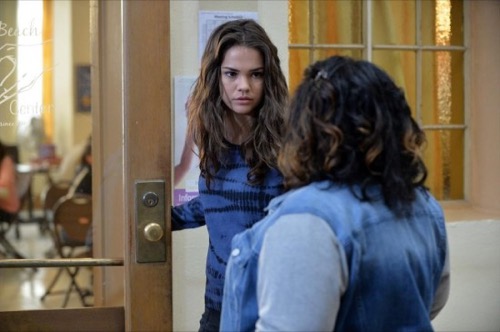 Tonight on ABC Family their hit drama The Fosters returns with an all new Monday January 26, season 2 episode 13 called “Stay,” and we have your weekly recap below. On tonight’s episode, Kiara seeks help from Callie [Maia Mitchell] regarding an unfit foster home, but getting Kiara out proves difficult. Elsewhere, Mariana is recruited to join a team of gifted students, but she hides her high math scores from Mat; and Jesus [Jake T. Austin] tells Hayley his secret.

On the last episode as Callie tried to wrap her head around Robert’s change-of-heart, an ambulance showed up at the Quinn’s house. Stef and Lena find themselves on opposite sides of several issues, including Lena’s sudden decision to quit her job. Brandon was offered an opportunity to attend a prestigious summer music program. Mariana struggled when her dance team leader changes the lineup the day before the competition. Did you watch the last episode? If you missed it we have a full and detailed recap right here for you.

On tonight’s episode as per the ABC Family Synopsis, “Kiara from Girls United reaches out to Callie when she is placed in an unfit foster home. Callie recruits Stef to help, but they soon find that getting Kiara out is not as straightforward as it seems. Mariana is invited to join the STEM team at her school after she tests above her class but chooses to downplay her math scores to her boyfriend, Mat.”

Callie is used to being disappointed. So when she found out she was going to have to attend summer school – that it didn’t even faze her. And why would it when she doesn’t necessarily know where she’ll be going to school next year?

So, yeah, Callie is used to having a crappy life but that doesn’t mean she wants the same to happen to her friend Kiara. Kiara had called her up in the middle of night asking for help and Callin in turn got Stef to step in and save Kiara from a bad situation. It seems that Kiara’s foster parents had gotten themselves involved with a bad drug trade and someone had arrived at their place waving around a knife and demanding money.

Hence, Stef’s assistance along with the officers she called in for backup ended up saving the day.

Kiara returned to the Fosters’ place to sleep for the night but coming morning she’s back where she started – searching for a reasonably safe foster home. And so when Callie went to school the next day – she wasn’t in the mood yet she still tried to talk to Wyatt who was obviously upset when she found him.

Since their breakup, Callie and Wyatt’s friendship has literally fallen apart. And Callie attempted to repair that when she started a conversation with him. However Wyatt didn’t want to be friends with her and he also made sure not to leave with any doubts about how really felt about her.

So it looks like Wyatt was just as fed up with Callie and her usual drama as Brandon.

Brandon wanted to go on tour this summer studying music and for once he wasn’t taking Callie into consideration. He simply wants to throw himself into his music and into his new relationship with bandmate Lou. Though his brother might be the one to pop his happy bubble.

Last week, Jesus had found his biological mother Ana was pregnant and there’s really not a lot of options of could be the dad. So Jesus believes Mike knocked up his mom and now he’s worried about his siblings are going to react to the news.

Up to this point, Jesus has only told his girlfriend Hailey about the impending baby. But Hailey is not trustworthy. When she gets mad at her boyfriend over the silliest things – she tends to take it out on him by ruining his other relationships with his friends and family.

She’s young but Hailey really is that manipulative. And so far only Mariana can see right through her.

Mariana for the most part tries to stay away from interfering with Jesus and Hailey yet there was one incident that made the girls kind of turn against each other. So while Hailey is sitting on a potentially hurtful secret – Mariana is doing the one thing that could antagonize her. She’s befriending Jesus’s ex.

Mariana and Emma are both in STEM which is an honors program for students that excel in science and math. And normally Mariana would have been proud to have showed that off but lately she’s been dimming her own light because she doesn’t want her boyfriend to feel jealous.

Lena had found out about what she was doing after one of Mariana’s teachers informed her that her daughter had actually asked not to be in the limelight for her achievements. So later Lena spoke to her daughter. And she told her that her boyfriend should love both pick nail polish and the math wiz part of her.

And Mariana did take her mother’s advice to heart. She told her boyfriend everything and it turns out he doesn’t feel threatened by such small things.

But there was one Foster that was left disappointed. Callie tried to help Kiara and after she finally got pass the wall Wyatt has put up – she thought everything would eventually work itself out. Yet, Kiara left.

Kiara was going to be put back into her old foster home and no one could stop it. Not even Stef and Mike. So Kiara ran away to where she knew she’d be safer. And Callie felt so guilty about that – she volunteered at a center that helps foster kids.

She figure that would be good work experience!