The Fosters Recap – “The Silence She Keeps” Season 2 Episode 17 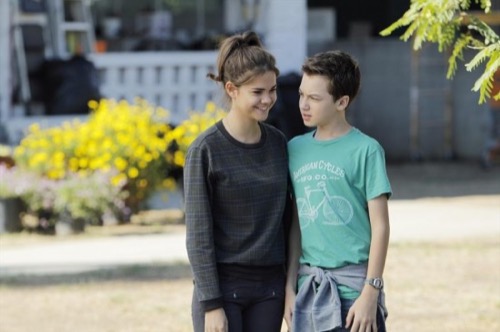 Tonight on ABC Family their hit drama The Fosters returns with an all new Monday February 23, season 2 episode 17 called “The Silence She Keeps,” and we have your weekly recap below. On tonight’s episode, Callie [Maia Mitchell] tries to keep a secret and makes a puzzling decision, which confuses Stef [Teri Polo] and Lena [Sherri Saum].

On the last episode Callie helped Daphne prepare for an official visit with her daughter, but their past actions haunted them. Meanwhile, Brandon’s band got a gig at a farm party, which didn’t go well; and Jesus was invited to attend a prominent wrestling school. Did you watch the last episode? If you missed it, we have a full and detailed recap right here for you.

On tonight’s episode as per the ABC Family Synopsis, “Callie tries to keep a secret and makes a puzzling decision, which confuses Stef and Lena. Meanwhile, Lena’s in an awkward position when Monte and Timothy clash over the school curriculum; and Mariana wants to persuade a talented dancer to join her team.”

Callie told her mothers tonight that she wanted to go live with her biological father Robert. However she lied when she filled them in on her reasoning. And she doesn’t appear to want to tell anyone, for that matter, the truth.

Not even Jude! Whom she later talked to and was even willing to convince living in separate homes wasn’t that bad of an idea!

You see, she told her family that it was just be easier if they stopped fighting. Her custody trial is about to come up and apparently no one really believes they can defeat Robert. He’s not only her biological father but he’s also wealthy. So Callie’s case, or more importantly the Fosters’ case against Robert, is doomed.

Hence when Callie told everyone that she wanted to save them the trouble of a trial by just going to live with her father right off – it did at least seem believable. Stef and Lena think their daughter is merely trying to protect them from later getting hurt. Yet they don’t know what exactly she was protecting from because said daughter is also being highly secretive.

And to be fair, Callie is actually more than just secretive. She’s also being quite manipulative by going to stay with her father. Because, ultimately, she knows if she does that then she can get Robert to do whatever she likes. Like helping her friend Daphne for instance.

Daphne needs someone in her corner to help get her off on potentially damaging kidnapping charges. And the Fosters can’t afford the same kind of lawyer that Robert can.

Plus, Callie thinks it would be best to distance herself from Brandon. It seems he has yet to be implicated in the kidnapping plot and so she doesn’t want to drag him into it. And that’s why Brandon has gotten off thus far.

Brandon constantly found himself in a load of trouble last year but lately he’s been on his best behavior. So much so his parents have even given him permission to go on the road this summer with his band. But if they were to find out about what he did at Christmas – all the trust he’s earned back would automatically be wiped away.

Thankfully, most of the kids have pretty much taken news of Ana’s pregnancy like it was nothing. Brandon didn’t freak out about his father wanting to play happy families with someone else’s kid. Even though that really was odd. And the twins also appeared to be fine with the idea that their moms might possibly adopt the baby.

In fact the only one that’s bent on acting out is Mike. Despite, not being in a relationship with Ana; he seems to think they can raise her baby together. And he was kind of hurt when she told him to stop living in a dream world.

So that’s what he did. He stopped fantasizing and rather than focus on the baby – Mike tried to reach out to his own son. But, sadly, he wasn’t wanted there either. For Brandon had told him the truth about their relationship as well.

Brandon told his father that Mike tends not to bother with him unless he’s the last resort. And that made Mike look at their relationship in a whole new light. In other words it finally dawned on him that he too has put in effort in establishing a healthy relationship with Brandon.

Like, ok, teenagers are notoriously difficult but it’s not like Brandon doesn’t need his father – he does. He just doesn’t know how to say it all the time.

And speaking of harsh reality, Callie realized she hasn’t been giving her father any sort of credit. Because it seems that he had helped Rita reopen the home for troubled girls and he had also befriended Jude in the process. While Callie tried to help Jude get over her move, Robert was actually able to make some headways with her little brother. He told Jude he would never interfere between them and that he was always welcomed at their home.

So Jude now feels ok about Callie moving. But what does Callie feel? Can she really take advantage of her father?

Meanwhile at school, Timothy also known as a really good teacher at the school has been fired. And that resulted in the kids, his students, acting out. Because once they heard the news, Mariana held a walk-out and some of the other students followed her!