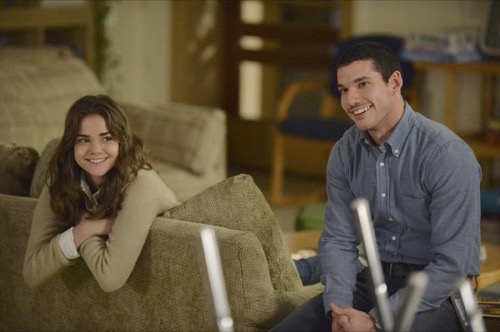 Tonight on ABC Family their hit drama The Fosters returns with an all new Monday February 16, season 2 episode 16 called “If You Only Knew,” and we have your weekly recap below. On tonight’s episode, Callie [Maia Mitchell] helps Daphne prepare for an official visit with her daughter, but their past actions haunt them.

On the last episode Callie decided to try a new tactic with Robert while Brandon aimed to convince the band that his mom’s rules could work for everyone. News about Ana’s situation gave Mariana an idea that would affect the entire Adams Foster family. Meanwhile, Jude tried to make amends with Connor and agreed to go on a group date. Did you watch the last episode? If you missed it we have a full and detailed recap right here for you.

On tonight’s episode as per the ABC Family Synopsis, “Callie helps Daphne prepare for an official visit with her daughter, but their past actions haunt them. Meanwhile, Brandon’s band get a gig at a farm party, which doesn’t go well; and Jesus is invited to attend a prominent wrestling school.”

On tonight’s all new episode of “The Fosters”, Callie’s friendship with Daphne might end up getting her back into trouble. It seems a present she had bought for her friend then showed up in a little girl’s hand right after she had been kidnapped. And though that same little girl was safely returned – the cops are now asking a lot of questions.

Daphne had kidnapped her daughter for a few hours and although she eventually returned her – the cops still want to pin charges on Daphne and possibly her associates for the part they played in the custodial interference. So the cops wanted to ask Callie about what happened. And they were even prepared to threaten her to get answers.

However, Callie was smart enough to know that her silence could help her in this situation and rather than take on the cops by herself – she called in her dad. Who then promptly made sure she was lawyered up.

Robert was happy that Callie called him when she needed help. It had made him feel like a father but Robert then went on to take advantage of the position Callie had put him in. He told her, her family (the Fosters) wouldn’t understand. Or at best know how to take care of things like he can.

And that wasn’t fair to the Fosters. Stef and Lena are good parents and admittedly while they may not always get things right – that never stopped them from trying.

After Ana had offered them her newest baby, the couple told her they needed time to think. Mariana on the other hand called what was happening Serendipity. First Lena loses her baby and now Ana is offering hers. So for Mariana, this was a pretty easy choice for her parents to make.

But neither Lena nor Stef saw it the same way as Mariana. They knew they couldn’t simply replace one child with another. And they didn’t know how Mike would feel about them possibly accepting the offer.

Mike has turned his own life upside down in order to get a second chance at having a family with Ana. If there’s no baby then will Mike still want that life with her?

Mike has been consumed about starting over that he’s making the same mistakes in regards to Brandon that he did last time – he’s putting his son on the backburner. And Brandon doesn’t do so well if people aren’t coming down hard on him. His latest gig was at a Pharm Party. Those parties are basically stupid kids taking all kind of pharmaceuticals. Some of which they don’t even know the name of. Yet Brandon, the child of an addict, is going to this party and Mariana is also going to be there.

Mariana wants to manage Brandon’s and her boyfriend’s band this summer. And she feels like she can handle their scene. But, as it turns, out she really is a delicate flower.

Not long after she showed up at the Pharm Party, she told her boyfriend she had to use the bathroom because she didn’t want him to know she wore contact lenses or that she needed to adjust them. So Mariana was wandering off on her own, after she assured her boyfriend she’d be just fine, and inadvertently got locked into a storage woman with another girl that was completely out of it.

And speaking of being out of it, Brandon was up onstage when she noticed his girlfriend Lou was top high to keep performing. Luckily, they managed to finish their set before she could embarrass them but Brandon was not going to forget her behavior anytime soon.

As for Mariana, she had first called Callie for help when she found herself locked in. Though, she soon had to call the emergency services when the other girls she was locked with started to convulse. Apparently the other girl had overdosed and she would have died if Mariana hadn’t gotten help.

But in getting help, Mariana cost the band two hundred dollars. It seems they don’t get paid when the cops bust up a party.

Brandon was so upset at Mariana that he told her this was why she couldn’t go on tour with them. However he wasn’t really that upset at what she did. He was just taking out all his anger at his girlfriend at her. So Brandon talked to Lou and he finally told her his real fears. He told her he didn’t want her to end up like the girl Mariana had found. He didn’t want to lose her like that and as a child of someone suffering through addiction – losing someone to drugs and/or alcohol was his biggest fear.

So Brandon and eventually Mariana made peace with their night. Mariana realized she wasn’t built for the band scene. And that Mat loves her anyways.

As for Callie, once she began to think about things and about how much trouble she’s caused the Fosters – she told them she wanted to move in with Robert. And sadly she’s not the only one that wants to leave the nest. Because Jesus also told his parents he wants to move out. It’s just that he wants to go to a special school that would hopefully get him a scholarship one day to college.

So just as Stef and Lena were thinking there were already too many responsibilities with the kids they have now – they suddenly had time and vacancy for a new baby.