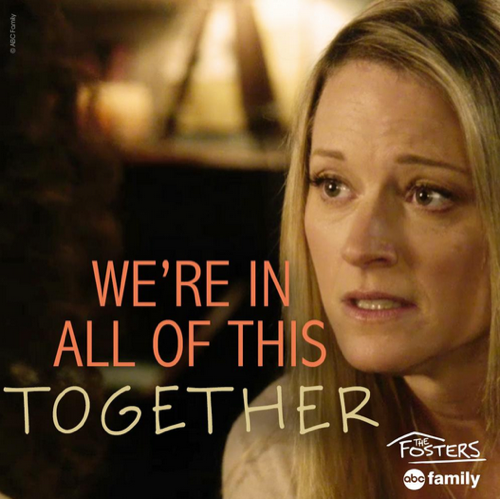 Tonight on ABC Family their hit drama The Fosters returns with an all new Monday March 16, season 2 episode 20 called “Not That Kind of Girl,” and we have your weekly recap below. On tonight’s episode, Callie [Maia Mitchell] faces another barrier on her road to a better future. Meanwhile, Lena [Sherri Saum] opens up to Monte [Annika Marks] about her troubles at home; Mariana [Cierra Ramirez] makes inquiries about a letter Ana [Alexandra Barreto] wrote to family members; and Jude [Hayden Byerly] deals with the consequences of using poor judgment.

On the last episode, Stef bended the truth with Lena about a way to adopt Callie, while Lena hid her emotions from Stef. Elsewhere, Brandon had to make a sacrifice in order to live out his dream of being a classical musician; and a defiant Jude saw Connor. Did you watch the last episode? If you missed it, we have a full and detailed recap right here for you.

On tonight’s episode as per the ABC Family Synopsis, “Callie meets another roadblock in her pursuit of a happier future, leading her to confront past demons. Mariana, troubled by the uncertain future of Ana’s baby, follows up on a letter Ana wrote to relatives. Meanwhile, Jude faces the painful fallout of a bad decision. Lena confides in Monte about her difficulties at home.”

We will be live blogging tonight’s episode at 9pm that airs on ABC Family. In the meantime, hit up our comments and tell us how excited you are for season 2 of The Fosters and enjoy a sneak peek of tonight’s episode below.

When kids fool around, even in jest, it comes with consequences. And Jude has had to figure that out for himself on tonight’s all new episode of “The Fosters”.

He and his friends technically broke into one of their own homes. And it was stupid yet at the time they thought it would be harmless fun. They wanted to sneak a few drinks out of a cabinet and it unintentionally scared awake a parent. So, ultimately one of them ended up getting injured by this little stunt and although Connor was later shown to be alright – his father felt like his relationship with all the other delinquents should come to an end.

Particularly as Connor told him it was all Jude’s idea in the first place!

And so where does that leave someone like Jude? Connor was his only friend and after the rest of the parents find about what he did – no one else is going to allow him near their children. So he’s back to where he started – a social pariah.

And as for Callie, she’s probably the most disappointed of them all. You see she thought she knew her baby brother, but what she knew was the kid that who used to do everything she said. This Jude on the other hand is prepubescent and he doesn’t feel like he should have to explain himself to Callie anymore. It’s not like she hasn’t gotten into trouble every now and then!

In fact, Callie is still in trouble. Because while she waits to hear from the judge about her living situation, her social worker approached her about her four maxed out credit cards.

Callie has never had a credit card in her life hence right away she knew her identity had been stolen but whoever is ruining her credit score isn’t doing anything useful with their own life. Instead their ruining Callie’s chances of a future over expensive handbags. And so Stef is going to try and help Callie clear her name.

And hopefully catch the culprit red-handed.

However, the Fosters while a loving family, tends to always have someone in a crisis. And this time it’s Mariana.

When it isn’t her maternal grandparents rejecting the very idea of her then its Emma and the dance team. Apparently, Ana had burned some bridges when she left home. So now Mariana’s grandfather is willing to pretend she doesn’t exist even when she’s standing right in front of him. And as for Emma, she feels like she’s lost respect since joining the dance team. Her fellow wrestlers joke about her actually being a girl and in her accelerated program – they put the best coder in charge of social media.

So if there’s a choice between being perceived as smart or sexy then Emma wants to be seen as smart. And she’s prepared to quite the dance team thus taking them out of professional competition (seeing as they’ll be short the required number) if need be.

It’s unfair but sometimes that’s just life. And Callie ended up feeling something similar when she ran into an old face at the center.

Remember Sarah. She’s the girl that Callie technically rescued from foster home that had the son with the wandering hands – Liam. Liam first abused Callie and once she was transferred out he then began hurting Sarah. Though Callie put a stop to that when she reported Liam to social services.

But since then Sarah hasn’t been doing so well. It seems she was transferred into yet another ugly situation and out of pettiness or spite she then started to impersonate Callie. Even going as far to buy herself a bunch luxurious handbags.

So Callie at first didn’t know what she should do. Especially as she partially felt responsible for how Sarah turned out.

Though it isn’t all her fault. For Stef’s investigation eventually yielded some results and it was shown Liam was actually behind the identity theft. He and Sarah had been working an angle together where they resold all the bags she bought with the credit card for cash. And, unfortunately, for Sarah she still thought Liam loved her.

That is until Stef and Callie showed her proof of Liam stealing her identity in a similar scheme with another girl.

So Liam is finally going to get prison time for the things he did. Including having inappropriate sex with a minor.

And later Jude found out Connor never said the break in was Jude’s idea. That was simply something his father came up with after Connor finally told him he was gay!

As for Anna, Mariana convinced her grandparents to possibly look in to adopting her baby but then she found out her moms wanted to adopt the baby as well!