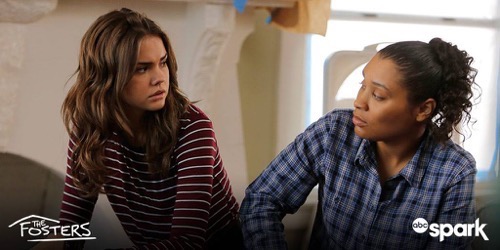 Tonight on ABC Family their hit drama The Fosters returns with an all new Monday March 9, season 2 episode 19 called “Justify the Means,” and we have your weekly recap below. On tonight’s episode, Stef [Teri Polo] bends the truth with Lena [Sherri Saum]  about a way to adopt Callie [Maia Mitchell], while Lena hides her emotions from Stef.

On the last episode Mariana organized a protest at school, which helped divert her attention from changes at home. Meanwhile, Callie put herself in jeopardy when she discovered Kiara was on the streets; and Jude demanded that Connor stop sending him mixed messages. Did you watch the last episode? If you missed it, we have a full and detailed recap right here for you.

On tonight’s episode as per the ABC Family Synopsis, “Stef confides in Lena and Callie about a plan that will make it possible for the Adams Fosters to adopt Callie, but she’s not being fully honest about some of the steps she’s taken to put the plan in motion. In turn, Lena hasn’t been completely truthful with Stef about her conflicting emotions over expanding their family. Meanwhile, Brandon has an opportunity to pursue his dream of being a classical musician, but it could come at a price. Jude breaks the rules in order to be with Connor and faces dire consequences.”

Callie has had a change of heart on tonight’s all new episode of “The Fosters”. It seems she no longer wants to go live with her father and yet Robert, on his part, still very much wants her to come live with him. And so regardless of her wishes – Robert is continuing to pursue full custody and the judge will probably back him up on this.

Stef and Lena, though, have chosen to fight him. They thought up a way to derail Callie having to move out. And, behind her wife’s back, Stef has been looking into Robert’s life.

You see she’s been finding dirt on him and with the custody of her daughter on the line – Stef is prepared to use whatever she can!

Meanwhile, though, the kids back home don’t really have an idea about what’s going on. Both with the case and generally around the house. And one of the reasons for this could be is that everyone has been afraid to tell Mariana the truth. Early on, she thought her new baby sister (Ana’s daughter) was going to be adopted and she even told Brandon that he was going to have to bunk up with Jude in order to make space for the baby. But Stef and Lena are not going to be adopting the baby. Mike on the other hand is still considering it.

What with Brandon soon to be going away for school, Mike has been seriously thinking about raising another child. And so far the only problem with that would be Brandon. Because, as we can all recall, Brandon neither trusts nor likes Ana ever since she extorted money from him.

Yet, later when he ran into a tearful Ana, she manages to inspire some sympathy in him.

Apparently she had missed on yet another job opportunity and though she could have made the situation all about her – she did stop crying long enough to make a formal apology to Brandon for all that she did. And Brandon, who could have kicked her when she was down, simply chose to accept the apology all the while take partial blame for what did happen. So the two of them have somehow made amends.

But Ana wasn’t Brandon’s only problem. He eventually ran into his music teacher and he was asked to audition for a summer program that, if he was admitted to, would look great on his college applications. So he had to make a decision about which comes first – his music or the band. And he went with his music. Much to the dismay of his friends.

Brandon would apparently rather go after the chance (there’s still the auditioning process after all) of playing the piano rather than travelling with his band for the summer. You see that’s his dream. And as for the whole tour thing, that was just a headache.

First his parents didn’t want him to go and then his sister wanted to tag along. So, walking away was probably the best. Mariana had thankfully given up on being a groupie but she also could have come up with another scheme. It’s kind of what she’s known for.

Yet no one ever wants to hurt Mariana. Not even Callie who had tried out for the dance team, as a mere gesture of support, and was actually surprised when she made it. So instead of just quitting – she came up with an imaginary injury. And, though that’s laughable – it doesn’t compare to what Stef and Lena did.

After they had taken some time and had even had a conversation about the adoption issue, they decided they do in fact what the baby.

Lena it seems has been talking over the issue with her new boss. And some would dare say the two women have even become friends because of that. Stef, however, didn’t like seeing this new relationship dominating somewhat over hers and Lena. So the wives talked about it and in the end they chose to be strictly honest with each other.

Although, Stef’s secret file on Robert is something Lena ended up finding on her own instead of having her wife being “honest” with her!

And as for Jude, his little crush on Connor now has some major consequences. Because, even though he wasn’t supposed to, Jude snuck out of the house to go hang out with Connor and some girls. And well one thing led to another, so they ended up breaking into of one of their own homes in order to rob their parents’ drinking cabinet and Taylor’s dad was a tad too trigger happy!