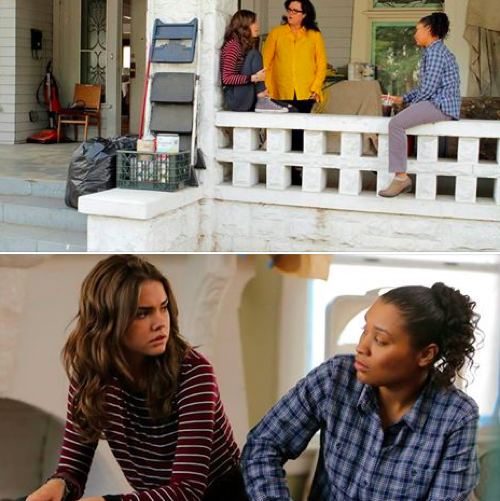 Tonight on ABC Family their hit drama The Fosters returns with an all new Monday March 2, season 2 episode 18 called “Now Hear This,” and we have your weekly recap below. On tonight’s episode, Mariana [Cierra Ramirez]  organizes a protest at school, which helps divert her attention from changes at home.

On the last episode Callie tried to keep a secret and made a puzzling decision, which confused Stef and Lena. Meanwhile, Lena was in an awkward position when Monte and Timothy clashed over the school curriculum; and Mariana wanted to persuade a talented dancer to join her team. Did you watch the last episode? If you missed it, we have a full and detailed recap right here for you.

On tonight’s episode as per the ABC Family Synopsis, “Mariana organizes a protest at school, which helps divert her attention from changes at home. Meanwhile, Callie puts herself in jeopardy when she discovers Kiara is on the streets; and Jude demands that Connor stop sending him mixed messages.”

Daphne has done the unthinkable, according to Callie that is, and now everyone has to live with the consequences of her actions on tonight’s all new episode of “The Fosters”. You see Daphne has confessed to kidnapping her daughter from the little girl’s home she shared with her foster parents. And, although, she kept Callie’s name out of it; Callie hadn’t know what was going to happen and so she followed the original plan they had worked out.

She told the judge in her court case that she wanted to go live with Robert and now, because of Daphne last minute actions, it’s too late for her to change her mind about that. Meaning she has to live with Robert, whether she likes it or not, and her family back home are the ones that are struggling with the decision. Take Mariana for instance. Once Mariana heard about Callie, she automatically thought they couldn’t be a family anymore.

According to Mariana, families live together. But if that what she believes then what about Jesus. Jesus was offered a scholarship to a prestigious boarding school and he’s been trying to talk his parents into allowing him to go.

One of the things he mentioned in order to convince them, though, was that he was going to be responsible. Yet, it’s been kind of hard to back up that claim all the while he, Mariana, and even Brandon are currently on strike.

Since Timothy was fired from the school, the sophomores and juniors have banded together to go on strike. So they’re not attending classes and even as Stef and Lena try to make staying at home as boring as possible (by removing all cellphones and also the wifi) for their own kids – Mariana still finds a way to hack into her neighbor’s wifi. Hence life at the good old family home is descending into chaos. And Callie moving is just adding unnecessary stress.

And so Callie wasn’t in a good place. She didn’t really want to live with her father and recently she’s been hanging out at Girls Untied again (after Robert had helped them rebuild) and she found out what happened to her friend Kiara. Earlier Kiara had run away when she heard she was going to be returned to an abusive foster home. Yet now Callie finds out that Kiara has started “working” on the streets and there’s nothing her friends can do to help.

ita had tried to reach out to Kiara and all she got was spit in her face for her troubles. Because while Kiara may want out – her pimp is not going to let her go! Not without a fight anyways!

So Kiara later showed up at the center to speak to Callie. At first, she was trying to talk Callie into telling Rita to stay away. But after Callie started talking to her and told her that the Girls United house had been rebuilt – all Kiara wanted to do was to go home. And Callie had assured her she could.

However, before they called Rita, Kiara wanted to retrieve some of the stuff she had left at her pimp’s place. Apparently he had been really good to her and she didn’t want to leave the nice clothes or the diamond necklace behind.

Meanwhile, Mariana had found out about the boarding school and she told Jesus to take the offer. It seems he was going to let the opportunity pass him by because he didn’t want to be another person to let Mariana down but in the end she saw what was best for him. And that was a school that was going to get him ready for college. So she told him to take the scholarship.

And as for Kiara, that excuse about getting her clothes back was that – an excuse. The truth is Kiara wanted to go back to her “boyfriend” and Callie, seeing what her friend was about to do, called in backup. She got Rita and Stef to show up before Kiara could go leave. And the two women scared away Kiara’s boyfriend.

Afterwards, though, Callie was so upset about the whole thing that she finally admitted the truth to Stef. She told Stef why she wanted to move in with Robert and Stef comforted her by telling her there was nothing she could that would make them stop loving her. But, Stef had much harsher things to say to Robert when she saw him. Because, looking at the situation, Stef saw how much Robert had played on Callie’s doubts and she wasn’t going to let him get away with it.

And, unbeknownst to everyone else, Jude and his friend Connor did get around to discussing what happened while they were camping and it wasn’t as heterosexual as originally stated it was.