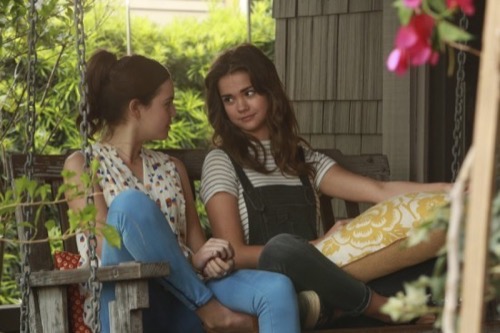 Tonight on ABC Family their hit drama The Fosters returns with an all new Monday June 15, season 3 Episode 2 called “Father’s Day,” and we have your weekly recap below. On tonight’s episode, Stef [Teri Polo] and Lena [Sherri Saum] host a Father’s Day brunch for Mike, [Danny Nucci] and Jude [Hayden Byerly] invites Donald to the event. Meanwhile, Callie [Maia Mitchell] joins the Quinns for Father’s Day and learns something unexpected; and Brandon lets go of some of his frustration.

On the last episode, picked up during summer, a few weeks after the terrible car accident involving Mariana, Jesus and their pregnant biological mother, Ana. As the family dealt with the aftermath of the situation, Stef was determined to find the driver responsible for the crash. Callie continued to volunteer at the drop-in center where she met AJ, a foster teen runaway searching for his older brother. Brandon started at the Idyllwild Music Program and quickly realized that he was faced with serious competition. Meanwhile, Jude told Connor he preferred to keep their relationship private at school. Did you watch the last episode? If you missed it, we have a full and detailed recap right here for you.

On tonight’s episode as per the ABC Family Synopsis, “as part of their annual tradition, Stef and Lena have Mike over for Father’s Day brunch. Jude surprises everyone, especially Callie, by inviting his biological father, Donald (guest star Jamie McShane, “Murder in the First”), to join them. Callie spends Father’s Day with the Quinns and hears some surprising news. Frustrated by his situation at Idyllwild, Brandon let’s off some steam with his classmates.”

It’s Father’s Day and in the Foster household that day carries a lot of baggage.

Tonight’s episode is the first time Stef is going to be celebrating Father’s Day without her own actual father. So she’s pretty touchy at the moment. And that’s also made her more considerate of Jude’s situation.

Unlike Callie, Jude wasn’t fathered by Robert. So Jude doesn’t want to spend the day, or any other day, being dragged along to Callie’s Father’s Day with her actual father. Instead he wants to spend the day with his own father. Donald!

Callie was upset when Jude told her that but their parents are backing his decision. If Jude wants to get to know his biological father then he has every right to. And Callie is just going to have to deal with that. Though, unfortunately, she could have taken the news a little bit better. She told Jude that he should go ahead and invite Donald and then she said he shouldn’t be surprised if Donald doesn’t show up.

Yet, for someone who doesn’t want to give Donald a second chance, Callie is awfully very forgiving of AJ. AJ later called her from juvie and it seems he still wanted to ask her for favors. So at first Callie tried to brush him off. But after her moms told her that Donald was coming over to the house – she needed a reason to leave. And AJ provided her one.

He told her to go down to the skate park to see what he did and it looks like he didn’t steal from the clinic in order to get high. He took the paints because he wanted to create the “bat signal” for his brother. You know the brother that failed to show up to come get him.

Apparently, the brothers had a secret signal for each other. So AJ is just trying to reach out and was arrested when they believed he was in a gang and tagging the building with a symbol.

Luckily for him, after Callie saw what he did, she brought in her mom Stef. And Stef promised to hear AJ’s story. So AJ is going to be receiving help and now he has someone looking into his brother mysterious disappearance.

Stef’s plan, however, to get AJ out of the detention center is to get Mike involved. See Stef and Lena can’t foster another child. Mike on the other hand can. He lives alone and thus has plenty of room at his place.

And more importantly, by going with Mike, Stef at least knows that AJ will be in good hands.

But, back at the house, the brunch Stef and Lena are holding for all the fathers had gotten off on a bad foot. Jude it seems doesn’t want anyone to know his father was in prison. And he told Connor not to say anything about their relationship to his dad.

So with so many lies, it was bound to be awkward at brunch. And it was. Connor’s father kept asking about Donald and why he quit his job in commercial real estate. Plus, Adam is a bit of a chauvinist so even if he was curious about either Lena or Stef’s job – he still wouldn’t ask them.

Meanwhile, Callie’s day with her dad and his family didn’t go so well either. Robert and his wife are splitting up and they were sort pushed into announcing it on a day that should have been dedicated to family. So it was an awkward lunch. That was thankfully saved by Callie.

Callie assured her sister that everything was going to be all right in the end and Sophia was really grateful. Lately, what with the way her parents were acting, she thought they were going to send her back to that facility to get treatment. But finding out her family might be breaking up turned out to be much worse. So Callie did come in handy.

And when she got back to the house, Robert noticed the way she was treating Donald and he had a talk with her. He said that as much as she’s beating up on Donald – Donald is probably doing that and worse to himself.

Callie didn’t want to be around Donald because he was drunk on the night he and her mom got into a car crash. But Robert told her to forgive and that they’ve all made mistakes in their lives. So Callie did come to forgive Donald which is good because Donald isn’t that bad of a guy.

After he found out that Jude was gay, he just instantly chose to accept him.

As for Mike, he did agree to be AJ’s foster father but while they wait for the paperwork to come through – AJ will be staying at Stef and Lena’s. So he’ll probably take Jesus’s old bed.

Jesus is away at boarding school and since he’s been gone his twin sister has been acting out. Though once she talked things over with Ana, Mariana realized that maybe she isn’t that bad of a person. Because recently she’s beating herself up for having cheated on her boyfriend and as it turns out she needed someone to tell her that under no circumstances will she ever turn out like her biological mother.

And who better to say that than Ana.