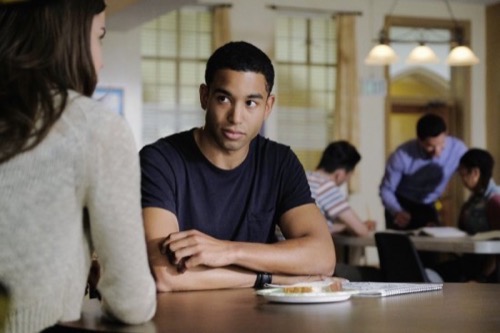 Tonight on ABC Family their hit drama The Fosters returns with an all new Monday June 8, season 3 premiere called “Wreckage,” and we have your weekly recap and spoilers for the premiere below. On tonight’s episode, in the third-season opener, the family deal with the repercussions of a bad car accident, and Stef [Teri Polo] searches for the driver of the other vehicle involved. Meanwhile, Callie [Maia Mitchell] continues her volunteer work; and Brandon [David Lambert] enters a competitive music program.

On the last episode, with one too many lies told in an effort to keep their growing family together, relationships were put to the test and someone’s story ended in tragedy on “The Fosters” Spring Finale. A visit with Robert’s father (guest star Patrick Duffy) made Robert and Callie see each other in a new light. Mariana prepared for a make-or-break dance team showdown at school, and Jude took a stand for a friend. Did you watch the last episode? If you missed it, we have a full and detailed recap right here for you.

On tonight’s episode as per the ABC Family Synopsis, “picks up during summer, a few weeks after the terrible car accident involving Mariana, Jesus and their pregnant biological mother, Ana. As the family deals with the aftermath of the situation, Stef is determined to find the driver responsible for the crash. Callie continues to volunteer at the drop-in center where she meets AJ, a foster teen runaway searching for his older brother. Brandon starts at the Idyllwild Music Program and quickly realizes that he will be faced with serious competition. Meanwhile, Jude tells Connor he prefers to keep their relationship private at school.”

On tonight’s season three premiere of “The Fosters”, life has appeared to move on since the car accident.

Jesus, Ana, and Mariana were all fine. And they seem to be adjusting to their new lives. Anna had had her baby which she later named Isabella. As for the twins, they simply went about their lives as if nothing had happened.

Jesus took that scholarship. So that means he’s now attending boarding school and Mariana is mostly baby-sitting her half-sister for Anna. Anna, you see, was injured in the accident. She now has to wear a back brace and that means she can’t be as mobile as she likes. And need the occasionally help.

But while Mariana is busying playing nurse/nanny, her mom Stef is still obsessed with the car accident. It seems Stef feels like their family needs answers. So she wants to find the driver that had hit her children and then drove off.

However this behavior of hers is pushing Lena her wife away. And at a time when Lena is having conflicting feelings about her boss – her home life shouldn’t be in this much array.

The kids are all off doing their own things and for the most part it’s just the two of them at the house. Brandon left to go to that summer program. And as it turns out, the program wanted him for his composer skills rather than what he does on piano. So that blow to his ego. And Callie is caught up with her work at the outreach program for foster kids.

Jude are technically still at home but Mariana is mostly at Ana’s and even Jude is busy currently figuring out his relationship with Connor.

So the parents are really on their own here. And just like before, they have stopped communicating. Thus we know where this leads. Lena had left for a couple of weeks the last time it had gotten this bad but will she do so again if Stef doesn’t drop the case?

If she does then it will have been a mistake!

Because while the kids look they have everything together, they actually don’t. Jude doesn’t know if he’s gay or not. And he’s made Connor swear not to tell anyone about them yet the truth came out anyways. So there was a moment when Jude was hurt.

Before he was the strong one in admitting his feelings but lately he’s been having an identity crisis. In other words he’s too afraid to commit to anything and now he’s the one letting Connor down. Luckily for him, though, Connor fought for their relationship and he even managed to get Jude to say the word “boyfriend”. And as for Callie, she met someone. His name is AJ and he’s runaway.

AJ was in a good foster home but ultimately decided to leave them in order to go live with his older brother. However when he went to go meet his brother, this brother never showed up. So AJ soon found himself homeless and Callie told him she could help.

She found him a place to stay for the night and she promised to help him find a replacement home later. Though she really should have told her parents about AJ instead of handling it herself. Because sadly she had bad judgement. AJ went on to steal from the center and that came back on her. Hence she was fired from a job that she needed in order to graduate.

And Mariana, had her own crisis.

And Brandon did realize that maybe, just maybe, he could make something out of himself as a composer.

Though he initially didn’t like the idea and was having a problem essentially giving up the piano. But where were his parents? Stef was chasing down every lead she could to a car accident that was no longer relevant and Lena was busy flirting.

Thankfully Stef eventually had her own epiphany and knew she had to walk away from the case but what about Lena? Her boss claims to be straight and then he constantly seeks Lena out. Even at school functions that basically run themselves.

So who’s the real problem here? Was it Stef for distancing herself earlier or was is Lena the problem for continuing a very dangerous friendship?