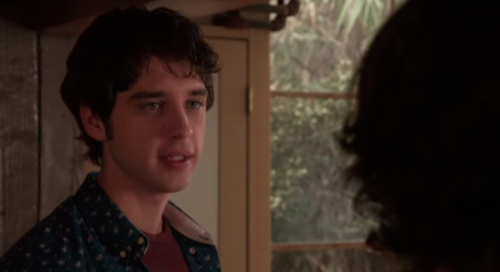 Tonight on ABC Family their hit drama The Fosters returns with an all new Monday July 20, season 3  Episode 7 called “It’s My Party,” and we have your weekly recap below. On tonight’s episode, Mariana [Cierra Ramirez] wants to be baptized so that she can be a godmother to her half sister, Isabella, but Stef [Teri Polo] and Lena [Sherri Saum] are reluctant to give her permission. Meanwhile, Callie [Maia Mitchell] must deal with the repercussions of her behavior at her birthday party.

On the last episode, Callie thought she was celebrating her 17th birthday with just the family, but Jude surprised her with a house party. Jude’s surprise risked exposing both Callie’s and Mariana’s secrets when he innocently invited Rafael and Wyatt to attend. Meanwhile, Brandon’s suspicions about AJ’s behavior came to a head, and Mariana and Callie decided to buy a car together without telling their moms. Did you watch the last episode? If you missed it, we have a full and detailed recap right here for you.

On tonight’s episode as per the ABC Family Synopsis, “Stef and Lena hesitate to give their blessing when Mariana’s biological grandfather tells her she must be baptized in order to be her new half-sister Isabella’s godmother. Callie’s actions at her birthday party are called out by Stef, and they make a big decision in order to avoid jeopardizing her adoption.”

We will be live blogging tonight’s episode at 9pm that airs on ABC Family. In the meantime, hit up our comments and tell us how excited you are for the next episode of the third season of The Fosters and enjoy a sneak peek of tonight’s episode below.

The relationship or better yet the potential relationship between AJ and Callie ended up having far reaching consequences on tonight’s all new episode of “The Fosters”. Yet it’s probably best to point out that AJ’s brother may have actually been the guy to stir the pot on this one.

See, last week, AJ finally got back into contact with his older brother Ty. As in the brother that had failed once already to collect him after originally agreeing they could live together. Though in all fairness Ty does seems to care about AJ’s wellbeing. So it was no surprise that Ty made that same offer as before to have brother stay with him.

But when the decision was put on the table, AJ turned it down. He said he preferred to stay with Mike rather than leave with his brother.

With Mike, AJ has a chance to one day go to college and also have support he so desperately needs at home. And that’s something his brother didn’t always provide. So AJ turned down Ty’s offer and unfortunately his brother then worked to undermine his decision because he simply couldn’t understand why AJ would willing stay with strangers.

Ty started to point out little things that AJ should get offended by and soon AJ began to see things for himself. For instance, why is he now going to live with Rita? Would it have anything to do with the fact that he had kissed Callie at her birthday party?

Ty said Stef and Lena wouldn’t want him around their daughter. Or to use his phrase the “princess”. And with Ty’s words having done some damage, to have Mike reiterate that AJ shouldn’t carry out a relationship with Callie just made the young man doubt whether or not he was really wanted.

He felt like Mike didn’t want him to be with Callie because Callie deserved better. But what Mike actually said was that Callie was the one that was too much work. And that she still needed to personally work out a few things before she could be ready for a relationship.

So it was Callie that had to clear up the confusion. AJ had told her what Mike had said to him and she then explained why Mike would feel the way.

Callie explained to AJ that she had once had a past relationship with Brandon when she first was fostered and that their relationship was hard on pretty much everyone until she decided to end it. Thus AJ now knows why Callie is considered a walking train wreck.

However, he apparently needed proof of this. So he continued to be around Callie and eventually that led them to both of them getting into trouble. Him, for hitching a ride from Callie in her brand spanking new car that none of the adults knew about. And her for getting them booth caught in a stolen car.

A sad fact they didn’t know about until after they got pulled over by the cops.

And while it was Callie and Marianna that had bought a stolen car, they didn’t really have the smarts to tell the difference between the correct paperwork and a forgery. So this one, regardless of it being an accident, is on the girls. Callie and AJ who are equally on probation so getting caught with a stolen item could have sent them both back to juvie.

Plus, even though they used their money to buy it, their parents had warned them about getting their own car. And were still quite upset with them when they had to settle the situation with the officer that would have arrested Callie. Thus that policy of theirs that it’s better to ask for forgiveness than permission is now out of the window.

Callie’s adoption is right around the corner and mistakes like this recent act is what led case worker to look again at their file.

It seem Brandon’s record wasn’t as expunged as everyone all thought. So the past restraining order against him is currently public record and once the case worker found out about it – she them demanded that Callie be moved to a different home. One that’s preferable as far away from her foster brother as possible.

And meanwhile Mariana who doing her best to keep her biological mother from losing but it looks like Ana is regretting her decision to keep the baby instead of giving it to Stef and Lena.

So what’s going to happen next week? Will Callie have to leave and if she does will she then be replaced by baby Isabelle?