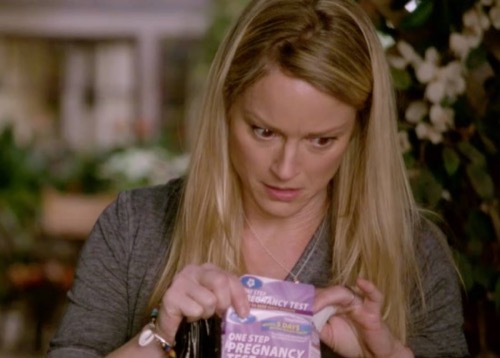 Tonight on ABC Family their hit drama The Fosters returns with an all new Monday July 6, season 3  Episode 5 called “Going South,” and we have your weekly recap below. On tonight’s episode, Callie [Maia Mitchell] and Brandon [David Lambert] go on an unplanned trip to Mexico. Meanwhile, an empty pregnancy-test box is found in the house, and Stef [Teri Polo] and Lena [Sherri Saum] wonder if someone may be pregnant.

On the last episode, when Lena’s half-brother Nate (guest star Travis Schuldt, “It’s Always Sunny in Philadelphia”) came for a visit with Lena and her parents, Lena aimed to get an apology for an offensive name he called her mother years ago. Meanwhile, Cole invites Callie, Jude and Connor to an LGBTQ prom.  Did you watch the last episode? If you missed it, we have a full and detailed recap right here for you.

On tonight’s episode as per the ABC Family Synopsis, “Callie convinces Brandon to head out on a mysterious trip that brings them to Mexico. Stef and Lena discover an empty pregnancy test box in the trash and wonder if someone in the house is worried they are pregnant.”

Tensions between Stef and Lena were already at an all-time high on tonight’s episode when a pregnancy test somehow made everything worse.

Stef and Lena were arguing about a contractor that Stef had seemingly hired behind her wife’s back when Stef tried to make amends by cleaning up around the house. So it was she was cleaning up that Stef came across a pregnancy test and wanted to optimistic enough to believe it was Lena’s. Only it wasn’t Lena’s who was actually offended to be asked. And they happened to be the mothers of two teenage daughter.

Lena decided to be the one to take on Marianna. She calmly asked her daughter how things were going with Matt. And she was left slightly relieved when Marianna replied the two never had sex.

They were also broken up but that could be dealt with at another time. The main concern was the test. And Lena took Marianna’s answer to mean the test had to be Callie’s.

However, neither she nor her wife were able to get into contact with that particular daughter. Marianna had told them that Callie was at the library, yet Stef checked her daughter’s phone and it showed that Callie had turned it off. So no one was really buying the library story anymore.

And the truth is Callie wasn’t at the library.

She and Brandon had driven down to Mexico to go hang gliding. Apparently, that was illegal in the States, so Callie tricked her adopted brother into coming with her where she could live out her dream to fly. And so at first everything was fine.

They both got strapped in and enjoyed themselves on the ride. But soon after they landed they then ran into the police. And the Mexican police wanted some kind of incentive to look the other way. So thanks to Callie, Brandon ended up losing his keyboard which was the only thing valuable on him.

Meanwhile, the great mystery was finally cleared up when Marianna confessed to both lying about Callie and using one of her mom’s old pregnancy tests.

So the moms needed some clarification. And Marianna’s best answer was that Lena had asked about her Matt but obviously he wasn’t the one she slept with.

And so after a long albeit awkward conversation, Marianna told her mothers about her one-night-stand. They of course were upset that they’re fifteen year old could be so cavalier about sex, but she soon put them in their place.

It was a mistake but it was her mistake. And she’s the one that has to live it. Not them.

With one daughter taken care of, there was still Callie to contend with. Callie and Brandon left the country and yet neither remembered to bring their passports. Something which both moms were able to figure out for themselves but didn’t have any means to contact their children to warn them.

Callie and Brandon had to get back into the country using sheer luck.

They told border control that they hadn’t been thinking and fortunately the guards decided to let them slide this once. But later they had to come up with another excuse to get pass their parents. So Callie said that’s he just needed to clear her head and that they simply drove into Mexico without really thinking about it.

Naturally, they both received a lot of scolding and were told things were going to get harsh from them around the house. But that trip did them some good. Brandon for one stopped whining about getting kicked out the program and what do you know he still has chance to go back.

And as for Callie, it seemed like Brandon is aware that she’s slowly her moving on.

Callie denies it but there’s something there between her and AJ. And AJ needs all the people he could get. His brother might not actually be missing.

Earlier, AJ and Mike went to go visit his grandmother in the hospital and Mike checked her records. It looks like her other grandson visited her not two days before they did. So then Mike began to have hope for his young foster son.

There had been an incident when a fellow cop mistakenly tried to arrest AJ, yet Mike had cleared that up and then told AJ that he shouldn’t let other people define who he is.

Just because people assume he’s a thug or is going to wind up in jail doesn’t mean he’s not a good kid. So that brush with racial profiling did help these two to talk. However, at the end of this episode, AJ’s brother contacted him.

And so what does that mean for this new father/son relationship?