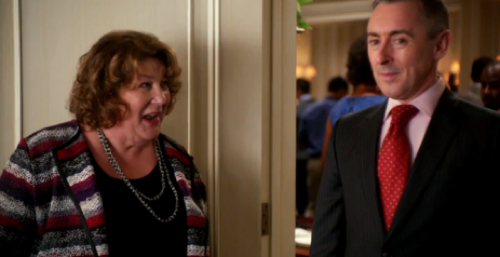 Tonight on CBS The Good Wife starring Julianna Margulies continues with an all new Sunday October 18, season 7 episode 3 called, “Cooked” and we have your weekly recap below. On tonight’s episode, Alicia (Julianna Margulies) and Lucca (Cush Jumbo) work together on a complicated case involving a designer drug dealer.

On the last episode, Alicia argued a complex museum vandalism case that involved photographs taken by a mother of her son, and considered enlisting the help of investigator Jason Crouse. Meanwhile, Cary dealt with partner Howard Lyman’s inappropriate conduct towards some younger associates at the firm. Did you watch the last episode? If you missed it, we have a full and detailed recap right here for you.

On tonight’s episode as per the CBS synopsis, “Alicia and Lucca work together on a complicated case involving a designer drug dealer. Meanwhile, Eli persuades Alicia and Veronica to take part in a mother-daughter cooking show to help Peter’s campaign, but things don’t go as planned.”

Tonight’s season 7 episode 3 looks like it is going to be great and we’ll be updating it live for you beginning 9:30 PM EST.

Tonight’s episode of The Good Wife kicks off with Alicia finding Howard Lyman waiting for her in her office – he says that he needs a lawyer, Cary and Diane are pushing him out of the firm. Alicia scoffs that they are probably pushing him out because he doesn’t do anything. She tells Howard that she has no interest in representing him, but she is going to give him some free advice. Alicia tells Howard that he can’t sue someone for ageism if he quits – he has to be fired, and he can’t give them reason to fire him. Howard leaves, and in the elevator he bumps in to Peter’s mother Jackie and flirts with her.

At Peter’s office, Ruth is holding a campaign meeting – she lied and told Eli the wrong time so he showed up late and missed half of it. Eli is accosted by one of the men on the campaign named Carl, he rants that Eli is supposed to be taking care of Alicia and she needs to spend more time doing appearances for Peter. They also need Eli to talk to Alicia about defending murderers. Ruth is still technically Eli’s boss, so he has to listen to her. Ruth informs Eli that it is his job to convince Alicia to do a cooking show with Veronica to help out with Peter’s campaign.

Alicia heads to bond court, she meets a client named Roland Hlavin – he was arrested for manufacturing GHB with intent to sell. Lucca is representing Roland’s partner. Apparently it was a huge bust and the cops seized over $2 Million worth of drugs and money in the operation. After court the DA corners Alicia and Lucca – he has a deal for them. Whichever one of their clients rolls over and talks will only get 1 year in prison, whichever one doesn’t will get 25 years. And, it’s a first come first serve basis. They have 45 minutes to decide with one of their clients will get to rat the other one out first.

Alicia rushes to meet with Roland and tries to convince him to take the deal, Lucca does the same with her client. Roland reveals to Alicia that he wasn’t dealing GHB he was fixing it. Apparently his brother overdosed on the drug, and he didn’t want anyone else to suffer the same fate. Roland is a chemist, and he genetically altered the GHB – it’s a synthetic drug, not the real thing. Alicia realizes that the DA was trying to play them and get them to take the deal because they knew they couldn’t charge them because the gynetically altered GHB was not on the official drug list. Alicia rushes to tell Lucca not to take the deal but she is too late. She calls Grace and tells her to get their PI on the case and find her an expert witness on synthetic drugs and someone to testify on Roland Hlavin’s behalf.

While Alicia is frantically rushing around bail court, Eli arrives – he tells her that she has to go on a live cooking show tomorrow with Veronica, it’s a mother themed show. Alicia scoffs that it is a horrible idea for her to go on a live TV show with her mother. While Alicia is arguing with Eli – Howard Lyman calls her cell phone. He wants to know if he can have Jackie’s phone number, he wants to ask her out on a date. Alicia and Lucca rush back in to the court room, they plead “not guilty” on behalf of their clients. The DA is furious when he realizes that Lucca backed out of their deal at the last minute.

Meanwhile, back at the firm – Diane is recruiting an intern named Naomi to work as her mentee. They are going to meet once a week and talk strategy, Naomi reveals that she has a boyfriend now and she met him online. Diane is unimpressed, she informs Naomi that being chosen as her mentee is an honor. Diane is disgusted, she rants to Cary that their interns aren’t committed enough – all they care about is their personal lives anymore.

Alicia and Lucca head to court with their clients over the synthetic drugs, they are trying to get the case dismissed. The witness confirms that the GHB that Roland was caught with is definitely synthetic and has a different chemical make-up as GHB. However, the high is identical to what GHB gives users. Alicia and Lucca’s plan backfires and the judge denies their motion to dismiss the case based on the fact that the drugs were chemically altered. Eli calls Veronica to his tiny office that is the size of a closet and tells her all about “Mama’s Homespun Cooking,” she thinks that it will be hilarious to see Alicia try to cook on live television.

Alicia and Lucca head back to court, Alicia tries another angle to get the case dismissed and Roland takes the stand and basically rats himself out. The judge denies their second motion and says that the case is going to trial. Afterwards Alicia gets a frantic phone call from Grace. She was doing some research on Roland – and according to the internet, he doesn’t exist. Stamford University has no record of him attending the school, and neither does his job at IBM. Also, there is a Cuban Family living at the address listed on his arrest report.

Its time for Alicia and Veronica to film their live mother-daughter cooking show. While they are getting ready, Alicia notices that her mother is drunk – moments before they go live. The cameras start running, and Alicia raves about what a wonderful cook her mother is, Veronica jokes that she would rather order pizza Veronica goes off script and starts talking about how messed up Alicia and her mother-daughter relationship is. Eli watches from the sidelines and laughs as the show goes up in smoke, meanwhile Ruth is freaking out as she watches it.

After the show, Alicia’s daughter arrives – she found a picture of Roland on the internet, with a bunch of FBI agents, either he is undercover or he is an informant. Roland refuses to tell her who he really is, she says that she is dropping him as a client. Roland blackmails her and says that if she drops him as a client, then he will tell the judge that Alicia was unethical and tried to get him to lie on the stand. Alicia visits Eli and warns him that she is being set up by the FBI, she thinks that it might have something to do with Peter’s campaign.

Alicia heads home and finds Diane waiting for her at her house. Diane says that they have an overload of cases at the firm – and they voted and decided to give a few of them to Alicia. Alicia thanks her for the work. It’s obviously Diane isn’t happy working at the big firm. Lucca shows up at Alicia’s door and interrupts her meeting with Diane. Alicia tells Lucca that they should sever their cases and work separately, she can’t tell Lucca the real reason why – because of attorney, client priveledges. Lucca takes it personally and tells Alicia to go screw herself.

The next day in court, Alicia Roland start bickering – Roland takes Aicia aside and tells her the truth. He reveals that he is an undercover FBI agent, and Alicia is coming close to ruining his case. Roland says that the target is Judge Chakowsky, they are cracking down on corruption – and someone is going to offer him a bribe. Alicia can’t tell anyone, but she heads home and tells Eli because he is panicking that she is being set up by Peter’s opponents to make him look bad. While they are talking, Diane shows up at her door – she is freaking out – she learned that Alicia betrayed her and gave Howard advice on how to sue them.

Alicia follows Roland’s orders, they head back to court and Alicia puts in another motion to dismiss the case – Alicia and Roland are shocked when the judge denies her motion. That means that he is not corrupt. Afterwards, Roland accuses Alicia of tipping off the judge and shout that she ruined a 2 year investigation before he fires her. Meanwhile, the Judge meets with his friend Eli in his chambers and thanks him for helping him out. Eli shrugs it off, but now he has a favor to ask of the judge.