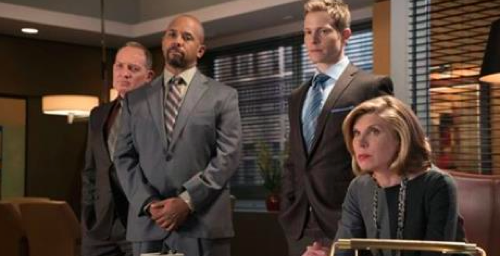 Tonight on CBS The Good Wife starring Julianna Margulies continues with an all new Sunday October 4, season 7 premiere called, “Bond” and we have your weekly recap below. On tonight’s episode, season 7 begins with Alicia (Julianna Margulies) attempting to revive her struggling law career by representing arrestees seeking release on bail in bond court.

On the last episode, Alicia’s professional future hangs in the balance as she decided what’s next for her career. Meanwhile, when Alicia got a suspicious call from a client, she discovered that he’s being held in a secret police facility where people were detained without being officially booked. Michael J. Fox returned as Louis Canning. Did you watch the last episode? If you missed it, we have a full and detailed recap right here for you.

On tonight’s episode as per the CBS synopsis, “season 7 begins with Alicia attempting to revive her struggling law career by representing arrestees seeking release on bail in bond court. There, she meets attorney Lucca Quinn, who competes for her clients. Meanwhile, Peter brings in a national strategist to help with his presidential campaign, which creates an interesting dynamic with Eli in the process.”

Tonight’s season 7 premiere looks like it is going to be great and we’ll be updating it live for you beginning 9PM EST.

Tonight’s episode of The Good Wife kicks off with Alicia Florrick in city court, she is volunteering to work as a bar attorney. Judge Chakowsky ignores Alicia in the hectic courtroom and doesn’t assign her any cases. After court, Alicia chases down the judge and demands to know why he didn’t give her any cases. He explains that she “acts” too much in court – he sees 50 cases a day. He doesn’t need Alicia creating a spectacle and slowing down the flow of cases, the other bar attorneys don’t drag out their cases.

Louis Canning takes Alicia out to lunch, he knows that she cant find work after the scandal – and he desperately wants her to come work for him. Alicia turns him down…again. After lunch she calls Eli and says that she has made her decision – she will support Peter if he runs for Vice President. Eli jumps in to gear and rushes off to track down Ruth Eastman – a very influential woman in Iowa that can sway the votes for Peter and help get him in to the election.

Alicia heads home defeated, when she arrives her daughter Grace has a surprise for her. Her brother put up a website for Alicia – and she has her first client waiting for her. Alicia heads in to her office and introduces herself to Mrs. Smulders. Apparently her mother died last week, and she didn’t leave a will. She left behind an $8 Million signed piece of art – and Mrs. Smulders is fighting with her brother for it. Alicia heads to the woman’s house, she meets Smulders’ brother’s lawyer there – who happens to be David Lee. They enter the house, but there is a problem. The sticky notes that were placed on the valuables naming who would receive them – all fell off and are lying on the floor.

Eli rushes back to Peter’s office, he susprised to see that Ruth Eastmen beat him there and was meeting with Peter. Peter hired her behind Eli’s back to run her campaign, she is replacing Eli and taking his job. Peter tries to explain that it is a national campaign and he needs someone more experienced with national politics. Eli is furious after everything that he has done for Peter – he shouts that he is going to find someone to run against Peter, and he just became his worst enemy.

Alicia heads back to city court the next morning, the judge tries to ignore her again – but another attorney named Luca convinces the judges to give her a shot. Alicia bombs her cases, and 4/5 of her clients don’t even get bail set. Afterwards, Alicia learns that she filled out the paperwork wrong, so she isn’t even going to get paid for the cases she handled at court.

Alicia heads to her next appointment with mrs. Smulders. She argues that since the post-it notes all fell off – the assets should all be split 50/50. David Lee disagrees, he brought in an adhesive expert to take the stand and discuss the post-it notes – theyare trying to argue that their client was supposed to get the $8 Million painting. After court Alicia corners Diane and demands to know why they are coming after her so hard.

Alicia meets with Peter’s new campaign manager Ruth Eastman, and is shocked to hear that Eli is no longer working for Peter. Alicia visits Eli at his house and tries to talk to him he’s not doing well – he is a hot mess and doesn’t look like he has taken a shower or left his house since Peter replaced him. Eli shouts at Alicia that it is none of her concern, and he was nothing more than “just the help.”

Alicia heads to court for the Smulders, David and Diane are throwing scientists on the witness stand left and right and burying her with material witnesses. They begin arguing over Mrs. Smulder’s Roomba – Diane has it brought in to the court room to be analyzed. While they are all gathered around and looking at the Roomba, trying to determine if it can be used to see whose post-it note fell off the $8 Million painting, they find another sticky note stuck inside it. But, it isn’t either of the kids’ names, apparently Mrs. Smulder left something to her housekeeper Selena as well.

After court, Eli is waiting for Alicia. He apologizes for his outburst – he volunteers to work for her as her Chief Of Staff. Alicia is confused as to why she will need her own Chif Of Staff, Eli warns her that Ruth Eastman is going to try to turn her back in to a “wife,” and will control her cases, work schedules, co-workers, etc. If Alicia hires Eli as her Chief of Staff – he promises to fight Ruth Eastman for her. Ruth picks Alicia up after court and says they need to talk. Alicia informs her that she hired her own Chief Of Staff – Eli Gold. Ruth tells her that isn’t going to work out, but Alicia refuses to budge or meet any of the other people she has lined up for her.

Alicia gets stuck in bond court and calls her new friend Quinn for help. Quinn can’t get to bond court in time to relieve her, so she heads to probate court with the Smulders to try and get a continuance. Diane and David Lee brought in the housekeeper and try to get the $8 Million painting awarded to her. The judge is about to give the painting to the housekeeper, but Quinn Lucca saves the day. She reminds the judge that there is a law in Illinois that caretakers can’t receive over $20,000 in their employers’ wills. Alicia rushes in to the courtroom just in time to hear the judge rule that everything will be split 50/50 between the Smulder children, which was what she was originally arguing for.

Afterwards Alicia and Lucca go out for drinks to celebrate – Canning tracks her down at the bar. Alicia realizes that it wasn’t a coincidence that she got the Smulder case and had to go up against Diane and David Lee – Canning sent the case to her, it wasn’t from her website. Canning asks her if she wants him to stop sending her cases, she says “no” and they “cheers.”