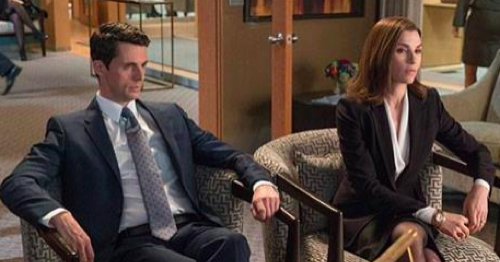 Tonight on CBS The Good Wife starring Julianna Margulies continues with an all new Sunday March 29, season 6 episode 17 called, “Undisclosed Recipients” and we have your weekly recap below. On tonight’s episode, the partners at Florrick/Agos/Lockhart argue over the future of the firm. Meanwhile, the firm becomes a victim of a cyber hack after it represents a movie producer whose work is pirated on a peer-to-peer sharing site.

On the last episode, Alicia’s political future was on the line when Peter gives an interview that could influence voter turnout on Election Day. Meanwhile, a weekend getaway with Kurt and his affluent hunting buddies could lead Diane to a prosperous new client for the firm. Did you watch the last episode? If you missed it, we have a full and detailed recap right here for you.

On tonight’s episode as per the CBS synopsis, “The partners at Florrick/Agos/Lockhart argue over the future of the firm. Meanwhile, the firm becomes a victim of a cyber hack after it represents a movie producer whose work is pirated on a peer-to-peer sharing site.”

Tonight’s season 6 episode 17 looks like it is going to be great and we’ll be updating it live for you beginning 9PM EST.

Tonight’s episode of The Good Wife kicks off with Alicia heading in to her first day at the office as the new State’s Attorney. She and Marissa find the office full of gifts, Castro stops by and reminds her that there is an unwritten rule that the new state’s attorney doesn’t investigate the former secretary’s cases. She warns her not to come after him – and reinvestigate Cary’s case. He threatens to overload her with loser cases so that her stats will be screwed when she tries to drop them. Castro storms out, and Cary arrives. Kalinda calls and says that Bishop wants to talk to Alicia – she tells Kalinda that he can come in and talk to her in person at the state’s attorney office.

Alicia and Finn sit down with Diane, Cary, David Lee, and Stan to negotiate on behalf of the state’s attorney office regarding the capital loan. The firm is $300,000 short of the loan payment, they argue that they lost Chum Hum as a client and they are short on cash. Finn scoffs that they need $300,000 more and there is no question about it. Diane and the guys excuse themselves to go to their deposition and they agree to revisit the issue later. Diane heads to the deposition for Warf Master with Cary. Their client’s movie was downloaded from the illegal site over 400 Million times – therefore it tanked at the box office.

At Alicia’s office Mr Redmayne pays her a visit to congratulate her – he tells her he whats her to hire his friend Dean as her deputy. Alicia tells him that she is going in another direction, he reminds her that he funded her pack – and he can have her removed just as quickly as she was elected. Bishop arrives at her office and interrupts, REdmayne leaves. Bishop tells Alicia that he is “going legit” and he is getting out of the game – he wants her to squash the Geneva Council’s investigation in to him. Alicia agrees to have it squashed, as long as he testifies against his lieutenants in court. Bishop tells her there is no way he is ratting out his own men, and informs her that she just made a huge mistake – he reminds her of how much money he invested in her campaign and storms off.

Back at her office Eli storms in and demands to know what the hell she is doing and why she informed Redmayne that she wasn’t hiring Dean. He shouts at her that he is bringing Redmayne back in for another meeting and it is her job to “kiss his ass.” Alicia whines that she is not his servant and he doesn’t own her but Eli doesn’t want to hear it. Later that day Alicia swallows her pride and meets with Redmayne, she tells him that she is “considering his endorsement of Dean and will make a decision within 48 hours.”

In the deposition, Diane’s argument goes sour – the computer that they used to pull up Warf Master’s website was one from their office. Warf Master’s lawyer reveals that their ads are tailored to the users – so whoever’s laptop they used is someone that surfs porn all day long. Cary meets with Finn and Alicia to discuss her exit package and divesting her position at the firm. He says that they are willing to add $50,000 – but that is as high as they can go. After Cary leaves Finn promises Alicia he will try to figure out how to get her the money she deserves from the firm, Alicia asks him to work as her deputy at the state’s attorney office.

Alicia heads home and her daughter shows her a website on her laptop – someone hacked the firm’s email and leaked all of Diane and Cary’s emails about screwing Alicia out of her part of the partnership. At the office Kalinda, Cary, Diane, and David Lee are reading all their leaked emails and laughing hysterically. All of their secrets are out – and the office is in turmoil. They call an office meeting and they order everyone to hand over their cell phones and no one is allowed to use email until they get the hacks ironed out. Everyone begins screaming at each other over what they were saying in their emails, David Lee shouts that he is not gay. Diane and Cary are at odds because he said in an email that she has a “stick up her ass.” Howard lied in an email and said that he had sex with Kalinda in a supply closet.

Kalinda thinks that it may have been the Anonymous hackers and they are fighting back against them because of their lawsuit against Warf Master. Diane gets an email from the hackers threatening that tomorrow they will release more emails dating from the last two years. Cary visits Alicia at the state’s attorney office and warns her that there are two years worth of emails coming out. Alicia tells Marissa to go through her emails from the last two years and figure out what she said about Bishop, Will, Peter, and anything else controversial. Eli storms in and interrupts, he heard that she asked Finn to be his number two and he is furious.

Kalinda is busy trying to figure out who the hacker is that has their company’s emails. She sees some hackers talking about punishing their law firm in a chat room – they realize that the person that was encouraging the hackers was Anthony, the owner of Warf Master. They head back to the deposition room and accuse the owner of Warf Master of trying to take them down.

Alicia heads home and Marissa is waiting for her – she has bad news, emails from Will and John discussing having sex with her, and email about her slamming Finn and saying he has a “spine of cottage cheese” and emails to her gynecologist from when she thought she was pregnant. Alicia heads to the firm and tells Diane that they need to settle with Warf Master NOW before their emails are leaked and their firm and her career is destroyed. Diane meets with their client Burton and tries to drop him as a client – he refuses to let her and says that no one will take on his case now after what the hackers did to their firm.
Alicia takes the emails to Eli and asks him what they should do – Alicia wants to apologize ahead of time before the emails are leaked. Eli tells her that it is a horrible idea, and she should never admit to something that hasn’t been revealed yet. Alicia meets with Finn and apologizes to him for the email that she wrote, even though it hasn’t been leaked yet.

Bishop arrives to meet with Alicia, he says they got off on the wrong foot. He tells her that he didn’t just donate to her campaign financially – he also sent all of his soldiers out to the urban communities and instructed them to take the African Americans to the polls so that they could vote for her. Alicia tells Bishop that she is still thinking about the Geneva Pine investigation.

Kalinda gets a break – she realizes that the owner of Warf Master lied under oath and he actually downloaded the movie they are arguing over illegally on his own website. They had back to depositions and Warf Master’s lawyers refuse to budge, they say they aren’t paying a dime and they want a formal apology from Burton for the frivolous lawsuit. Diane’s client tells her to just take the deal and drop it before any more damage is done – his company’s emails were just hacked too. Cary pays Alicia a visit at the state attorney’s office and tells her that they settled with Warf Master and she doesn’t have to worry about the leaked emails anymore.

Eli stops by Alicia’s office and she tells him that the emails are underwraps for now and she doesn’t have to worry about anything. Eli pitches a lawyer to her that he wants her to appoint as her deputy, Alicia scoffs and gives him the same answer that he made her give Redmayne – she will decide in 48 hours.