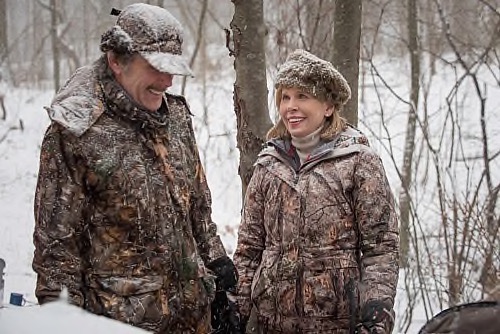 Tonight on CBS The Good Wife starring Julianna Margulies continues with an all new Sunday March 22, season 6 episode 16 called, “Red Meat” and we have your weekly recap below. On tonight’s episode, Alicia’s [Julianna Margulies] political future is on the line when Peter [Chris Noth] gives an interview that could influence voter turnout on Election Day. Meanwhile, Diane  [Christine Baranski] goes on a weekend getaway with Kurt and his affluent hunting buddies, and she hopes it will lead to her landing a prosperous new client for the firm.

On the last episode, when Frank Prady decided to go after Governor Florrick as a campaign tactic, Alicia was faced with the decision of whether or not to attack Peter’s record as well. Also, when Florrick/Agos/Lockhart took on the case of a man paralyzed by a malfunctioning gun created on a 3D printer, they call on Kurt McVeigh to testify as an expert witness, which lead to a rift between Diane and her husband. Did you watch the last episode? If you missed it, we have a full and detailed recap right here for you.

On tonight’s episode as per the CBS synopsis, “Alicia’s political future is on the line when Peter gives an interview that could influence voter turnout on Election Day. Meanwhile, a weekend getaway with Kurt and his affluent hunting buddies could lead Diane to a prosperous new client for the firm.”

Tonight’s season 6 episode 16 looks like it is going to be great and we’ll be updating it live for you beginning 9PM EST.

Tonight’s episode of The Good Wife kicks off with Peter and Alicia in a car together – Peter snaps that making him seem racist at the Black Business Leaders summit was a low blow. Meanwhile, Diane is at a lodge in Wyoming with her husband – while they are in the dining hall she recognizes a millionaire named Gil Barridge and knows he just left his last law firm. She calls Gary and tells him to get some information on Gil so that she can try to pitch their law firm.

Alicia is at her house with Jonathan – it’s finally election day. She says that she wrote her acceptance speech – but she heard it was bad luck to do it before the votes are tallied. Finn stops by to tell Alicia good luck, and it is awkward with Jonathan there. Alicia excuses herself when she receives a phone call – it is Bishop calling her to tell her good luck. She rushes off the phone with him and says that it’s a busy day and she doesn’t have time to talk. Bishop hangs up and calls Kalinda in – he tells her that Alicia is trying to put some distance between herself and him, and he has put too much money in to her campaign. He tells Kalinda that she is going to have to be the go-between for him and Alicia.

Diane’s husband announces that he is going on a hunting trip with his friends – so she has to go on a spa day with all of their wives, she is not thrilled. Peter heads to an interview, and back-handedly sabotages Alicia. He announces that Alicia is “guaranteed to win the election.” Jonathan calls Alicia and is panicking – he says that Peter just screwed her. Once the voters see his interview, they are going to think that she has the election in the bag and not even both going to the polls to vote for her. Jonathan demands to know why Peter is sabotaging her – but she insists that she has no idea.

Alicia tracks down Peter at an event and tells him that she saw his interview – he plays coy and says that he doesn’t know why she is upset, he just told the truth. Alicia whines that no one is going to vote for her if they think she has already won. Peter insists that what he said won’t hurt her election. Alicia snaps that Peter doesn’t want her to win because he wants to be the only winner in the family. She tells Ely to cancel the rest of Peter’s interviews for the day.

Kalinda is driving Bishop’s son Dillon to school – the black SUV is following her again. She calls Bishop and tells him, at the next red light Bishop’s men pull up to the SUV and drag the two men out of it and kidnap them. When Kalinda drops Dillon off at school one of the other moms corner her – she saw what happened at the traffic stop and she demands to know if everyone is all right.

At the resort Cary calls Diane – he tells her that he did some investigating and it turns out that Gil left his last firm because his wife Georgette didn’t like them. If Diane wants to win over Gil, then she is going to have to win over his wife. Alicia returns home and Josh and John are bickering over what to do about Peter’s interview, they break the news to her that according to the latest poll numbers she is losing the election right now. Josh and John decide to send out a robo call to the voters – they think that it will help her campaign.

Diane heads out on the hunting trip with her husband – she sits down with a man named RJ and they discuss his views on abortion. Two deer arrive in the forest and Gil tries to get Diane to shoot them – she gets them in her sights and Gil pressures her until she pulls the trigger and kills the deer. Meanwhile at Alicia’s house she takes a break from playing video games with Marissa and Finn, John tells her that the election is not going well and she should begin working on her concession speech. John and Josh try to get Peter to record a robo-call to send out to voters and retract his statement about saying that Alicia had the election in the bag. Peter tells Ely that there is no way he is recording the robo call.

Cary calls Diane and she tells him that she didn’t seal the deal with Gil or his wife. Cary says that is not important, they snooped around and the 4th richest man in America is on the hunting trip with her and he is shopping for a lawyer – Diane learns that it is the man RJ that she was hunting with. Bishop corners Kalinda – he tells her that the men in the SUV were following her and they work at the state’s attorney office – they weren’t after him or his son. Meanwhile, back at the hunting lodge – Diane sits down with Reese to discuss him using their firm. He agrees and tells her to call him when they get home and set up a meeting.

The election is winding down – Peter decides to help Alicia and he has a spontaneous speech in the plaza and shuts down traffic in the city so that no more voters can get to the polls and vote for Frank Prady. At her house Alicia and her team impatiently wait for the election results on the local news channel. Alicia asks Finn to go out to dinner with her and he awkwardly turns her down and says that he is dating someone else.

It’s finally time for the election results – the news anchor announces that Alicia Florrick is the new state’s attorney. Alicia’s phone begins going off and everyone is calling her to congratulate her. Alicia’s team gets ready to go to the victory speech. Alicia slips out and secretly meets up with Frank Prady before he gives his concession speech. Alicia begs him to come work for her at the state’s attorney’s office – she wants him to be her deputy. Frank kindly turns her down and says it won’t work because he doesn’t “believe in her approach.”

Everyone heads to the victory party – Marissa and John watch Alicia celebrate. John confesses to Marissa that he was thinking about sticking around in Chicago and helping Alicia out – but then Peter arrives and John says that he “isn’t the kind of guy to stay in one place.” He tells Marissa to take care of Alicia and slips out of the victory party without even saying goodbye.