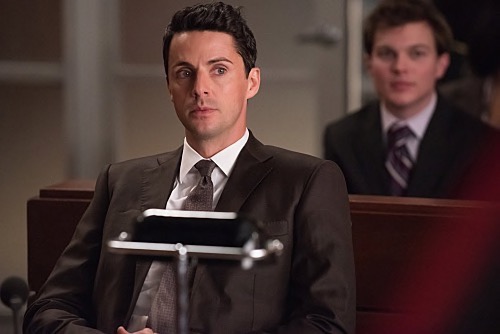 Tonight on CBS The Good Wife starring Julianna Margulies continues with an all new Sunday March 15, season 6 episode 15 called, “Open Source” and we have your weekly recap below. On tonight’s episode, Frank Prady attacks Peter’s gubernatorial record as a campaign tactic, which forces Alicia to consider doing the same. Meanwhile, the firm takes the case of a man who was paralyzed by a malfunctioning gun created by a 3D printer, and Diane’s husband testifies as an expert witness, which leads to a rift between them.

On the last episode, Alicia prepared for a key interview that could have a big impact on the outcome of the race for State’s Attorney. Meanwhile, Louis Canning pressured Florrick/Agos/Lockhart to agree on a settlement in his wrongful eviction case against the firm. Did you watch the last episode? If you missed it, we have a full and detailed recap right here for you.

On tonight’s episode as per the CBS synopsis, “When Frank Prady decides to go after Governor Florrick as a campaign tactic, Alicia is faced with the decision of whether or not to attack Peter’s record as well. Also, when Florrick/Agos/Lockhart take on the case of a man paralyzed by a malfunctioning gun created on a 3D printer, they call on Kurt McVeigh to testify as an expert witness, which leads to a rift between Diane and her husband.”

Tonight’s season 6 episode 15 looks like it is going to be great and we’ll be updating it live for you beginning 9PM EST.

Tonight’s episode of The Good Wife kicks off with a new website called “RipBuild” that allows people to design 3D guns for their own use. A man took his new 3D gun to the shooting range and attempted to shoot a target with it, the gun malfunctioned and shot a man standing behind him.

At an interview Alicia discusses her firm representing the man that was shot by the malfunctioning gun, they are going after the manufacturer Rip Build. She uses the lawsuit to support her gun activism policies. Meanwhile, Frank Prady is watching the interview from afar, his campaign manager rants that he needs to stop letting Alicia play the saint card. Frank says he refuses to smear Alicia, and he made a deal with her. The campaign manager tells Frank that he doesn’t need to smear Alicia, he can just smear her husband Peter Florrick.

Frank heads out and slams Peter to the press. Alicia’s campaign team gets wind of Frank’s smear campaign against Peter. Josh and John lecture her on how to combat it, they want her to distance herself from her husband and criticize some of his policies as well. While John and Josh are bickering over how to handle it – Josh reveals that John is abandoning them on election day and heading off to manage a new campaign in California.

Alicia receives a phone call from Cary – she demands to know how McVay is doing on the stand at the 3D gun trial. Cary says that is not why he is calling, Louis Canning is awake in the ICU. Cary thinks she should go visit him at the hospital and get him to sign off on the lawsuit he filed against them. Alicia argues that she is not going to make him accept an offer while he weak and laying in a hospital bed.

In court Finn is questioning McVay on the witness stand about how plastic guns are printed out with 3D image printing form the RipBuild website. McVay is cross-examined by the Rip Build owner’s lawyer – she points out that Summerfeld (the man that was shot) should be suing the actual shooter of the plastic gun and not the owner of the website.

Alicia heads to the hospital to visit Canning – he just got a new kidney. Alicia tries to talk about the lawsuit – but Louis interrupts her. He tells her that he got the kidney of a 13 year old girl that was killed in a soccer game. He promised himself that if he survived the transplant surgery he was going to do something nice for the girl’s family. He wants to sell all his stocks, which are worth $18 Million, and give the money to the girl’s family. Louis says that his estate attorney is David Lee and he is is avoiding Louis and waiting for him to die so that he can keep the money in house. Louis asks Alicia to make the sale for him and make sure the 13 year old girl’s family gets the money.

In court the next day the owner of Rip Build’s site, Fife, takes the stand. He reveals that he can email a gun to anyone in the world in seconds, as long as they have a 3D printing press. Fife points out that he created the website so that people’s amendments and gun rights can’t be violated. He adds that if everyone had a 3D printing press, they could email guns to people in countries that are being overpowered by dictators.

Alicia heads to David Lee’s office and learns that he isn’t ignoring Louis, he just refuses to support terrorists. According to David, he talked to the girl’s family and they don’t want the $18 Million – they want to donate it to a charity called “Strong Arm of Liberty” which promotes Palestinians. David Lee says he is not giving $18 Million to a group that could be terrorists, and he needs to get the go ahead from the government.

Diane, Cary, and Fin meet with Fife’s lawyer and she offers their client $200,000. Diane says they will talk to their client Summerfeld and get back to her. Everyone heads back to court and another witness takes the stand. A gun ballistics expert reveals that the shooter tweaked the gun before printing it out, if he had kept the dimensions the same as the ones on Fife’s website then the gun wouldn’t have backfired.

Eli gets word that Alicia is attacking Peter’s hiring policy on blacks and he is furious. He visits Alicia’s campaign headquarters and threatens John. He reminds John that he got him the campaign job in California and threatens to call them and tell trash him if he doesn’t pull back on the Black Business Leaders Association. Before Eli leaves he reminds John that they don’t have to be friends with Peter – but they don’t want him as an enemy either.

Diane’s husband McVay has a hunch – he thinks that it wasn’t Fife’s fault that the gun misfired and shot Summerfeld. He tells Diane that she has the wrong defendant – they should be suing the creator of the printing press and not the owner of the site Rip Build. Diane amends the lawsuit and adds the manufacturer of the printing press. McVay is furious that she is still suing Fife and refuses to testify again – he thinks that she is suing Fife just because she doesn’t like him.

John rushes over to Alicia’s house and tells her that he thinks they should lay off the Black Business Leaders Association – he gives her a copy of the speech he wants to give and tells her that they shouldn’t slam Peter since he has helped them since day one. Before John leaves, Alicia demands to know why he is leaving on election day. He assures her that it is nothing personal and just for a new job in California.

Alicia visits Louis in the hospital – he is unconscious, but the nurse tells her to talk to Louis anyway and says it will be therapeutic. Alicia rants that her daughter is praying for him, but she isn’t because she doesn’t want to be a hypocrite. She confesses to sleeping Louis that she doesn’t want him to die and she “sort of misses him.” Alicia says she “seems to have bad boy issues” and tells him to get well. She takes Louis’s hand and promises him that she is going to get his money to the Palestinian charity.

Marissa corners John and tells him that he is a dirtbag. She rants that he is letting Eli bully him, and she knows everything about the job in California. Marissa calls him weak and John snaps at her to mind her business and says that it is her job to “get Alicia breath mints and chapstick.”

Meanwhile, McVay receives a knock at the door – he is served papers from Diane ordering him to testify in court. McVay heads to court and Diane questions him on the witness stand – he is less than helpful to her and tells the court that it was all the 3D printer’s fault that the gun misfired. The judge agrees with Diane that Fife should still be sued for damages, along with the manufacturer of the 3D printing press.

Alicia meets with Frank Prady before their speeches at the Black Business Leaders Association, Frank confesses to her that he is not gay and he wishes that his campaign team had let him explain himself. He says that he is a Jesuit – and it is against his religion to get married more than once, so after his wife died he never got married again. Alicia wishes him good luck in his speech. Frank heads out to give his speech, and Alicia receives a phone call from a furious Eli – he demands to know if Alicia is sending money to a terrorist group. Eli tells Alicia that she is blind, she is obviously being set up by Eli and David Lee – they are doing this to ruin her campaign.

Alicia gets prepared to give her speech, John stops her in the hallway and tells her that he changed his mind again. He tells her that she needs to go after Peter and “kill him.” He gave her new anti-Peter speech to the teleprompter. Alicia is confused why he changed his mind again – but has no qualms about destroying Peter and his policies. She heads out to the podium and begins reading the speech from the teleprompter and accuses her husband of being racist. Eli realizes what Alicia is doing and he calls John – he snarls “consider yourself out of a job you son of a bitch.”

Kalinda does some research and realizes that hot and cold temperatures can cause the plastic guns to be printed out incorrectly and cause malfunctions. They head back to court and Fife takes the stand – Diane cross examines him and he confesses that he knew temperatures were a variable with 3D printing presses and he didn’t disclose that information on his website. Fife’s lawyer meets with Diane and her client and offers him $5 Million to drop the suit – she said the money is coming from a mysterious benefactor who supports Fife’s gunprinting and she refuses to tell them who it is.

Alicia pays Louis a visit and demands to know if he was setting her up, Louis pretends he was drugged and has no idea what she is talking about. Alicia heads home and runs in to John, he stopped by to congratulate her on the speech. She invites him inside, and John steps out of the elevator and begins kissing her.