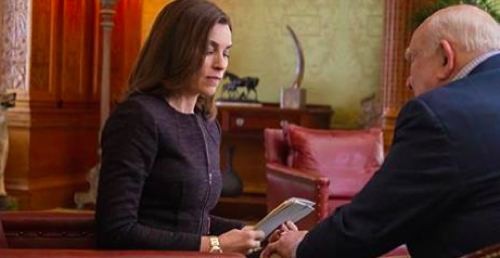 Tonight on CBS The Good Wife starring Julianna Margulies continues with an all new Sunday March 8, season 6 episode 14 called, “Mind’s Eye” and we have your weekly recap below. On tonight’s episode, Alicia prepares for a key interview that could have a big impact on the outcome of the race for State’s Attorney.

On the last episode, Diane and Cary represented Colin Sweeney when he accused a TV producer of basing an unflattering character and show on him. Meanwhile, Alicia competed against Frank Prady for a major campaign donation. Did you watch the last episode? If you missed it, we have a full and detailed recap right here for you.

On tonight’s episode as per the CBS synopsis, “Alicia prepares for a key interview that could have a big impact on the outcome of the race for State’s Attorney. Meanwhile, Louis Canning pressures Florrick/Agos/Lockhart to agree on a settlement in his wrongful eviction case against the firm.”

Tonight’s season 6 episode 14 looks like it is going to be great and we’ll be updating it live for you beginning 9PM EST.

Tonight’s episode of The Good Wife kicks off with her campaign manager briefing her on her interview – she has lost her voice and they are trying to pump her with cough medicine. He tells her not to talk and rest her voice and takes her cell phone, Marissa leaves her a bag of medicine and tells her they will be back to pick her up in three hours. As soon as they leave Alicia opens her laptop and google Frank Prady’s interview with the editorial board to see what he said – during his interview Frank praises Alicia, and then disagrees with her policies and opinions. Alicia begins writing her answers to the questions that she thinks the editorial board will ask her.

Alicia receives a phone call from Louis Canning – he says that he isn’t well and he doesn’t want to leave the Earth with a lawsuit hanging over his head. He offers to settle for $4 Million for being wrongfully fired by her firm. Alicia rants that if he is in the last few weeks of his life, and he should be spending them with his family – not battling her. He tells her to meet him at depositions tomorrow or else the offer is off the table. Alicia sits back down and begins imagining what Diane will say during the deposition tomorrow regarding Louis’s wrongful eviction. Alicia is confident that they can beat Louis because Howard had a verbal agreement with Diane to be his proxy. Alicia calls Kalinda and tells her that she has a problem with their wrongful eviction suit – she needs to know if David Lee has been in contact with Louis.

Jon calls Alicia and tells her that they have a serious problem, there was a wire tap released on the internet of Bishop telling one of his men “Don’t worry if you get arrested, I just bought the next State’s Attorney.” They can’t find the recording yet – so they don’t know if it is true, but Jon wants Alicia to prepare responses if it comes up in her interview. She whines that she can’t prepare a response if she doesn’t know if the tape actually exists.

Alicia begins daydreaming again, and imagines Bishop bragging that he just brought the next State’s Attorney. Alicia imagines how she will respond to the editorial board when they begin grilling her about her relationship to Bishop. Her phone rings and Kalinda calls her back – she says that David Lee has called Canning 22 times this month. Kalinda puts her on speaker phone and she fills Cary and Diane in, she thinks that David Lee is going to testify against them for Canning. They are baffled about why Canning called her instead of them, they think Louis is banking on her settling to save face of her campaign. Alicia hangs up and begins daydreaming about Kalinda, and then Peter and Kalinda together.

Alicia begins trying to make a list of possible damages for Canning’s lawsuit – she realizes that the reason he is arguing for $4 Million is because when they evicted him he lost his main client, Solace Securities. Alicia plans to argue that Solace’s departure had nothing to do with Canning being evicted and it was actually because the head of the company walked in on Howard not wearing any pants.

Alicia continues to go crazy and daydream about Louis, the editorial board, and Bishop. She sees a commercial for credit cards and the man’s voice reminds her of Will – she begins daydreaming about having sex with Will and puts her coat on and runs out of her house. She finds Marissa sitting outside her doo in case she needed anything. She snaps that she needs some fresh air and rushes off before Marissa can tag along.

Alicia begins power walking and imagining having sex with Will, Jon calls her again. He lectures her about resting before her interview, she whines that the editorial board is going to ask her if she knew Bishop put money in her pack and she did know. Jon instructs her on how to answer the question correctly, and she begins imaging herself having sex with Jon. While Jon is rambling about Bishop Alicia’s daydream continues – only now she is having sex with Finn.

Alicia hangs up on Jon and begins reminiscing about Will again. In her head she imagines herself telling Will how much she misses him, she cries to him that everything is falling apart and the imaginary Will in her head gives her a pep talk and tells her how strong she is and encourages her to “keep it together.” She receives a text message on her phone from someone named Evan telling her “not to give up God loves her.” She realizes the text message was meant for her daughter Grace, she calls Grace and she reassures her mom that everything is fine and she will see her when she gets home.

Cary and Diane call Alicia while she is out on her walk – she tells them that she has decided they should pay Canning off, at least some of the money, or else he will make them look heartless because of his health. They inform Alicia that the deposition is cancelled and Canning is in the hospital – it sounds serious, his wife called them and gave them the heads up.

Alicia walks straight to the hospital to see just how sick Canning really is – while she sits in the waiting room she continues to think about her daughter Grace and why she was texting her friend Evan about “giving up on God” and being done. Alicia is afraid that without religion Grace is going to get pregnant and start sniffing glue.

Louis’s wife Simone finds Alicia in the waiting room – she reveals to Alicia that it doesn’t look good for Louis and he probably won’t make it through the night. She invites Alicia in to Louis’s hospital room to see him while he lays there unconscious. She asks Simone if there is anything she can do for her and she asks Alicia to “pray for Louis.” Even though Alicia doesn’t believe in praying, she agrees to do it. Alicia leaves and calls Grace and asks her for her to pray for Louis for her.

Alicia returns home and gets ready for her interview, Marissa fawns over her and makes her tea with lemon for her voice. Grace checks in on her and they talk about praying – Alicia admits that she promised she would pray for someone. She asks Grace if she is losing her faith. Grace admits that it “comes and goes” and Alicia reassures her that she is happy she “found something” and she doesn’t want her to lose her faith because she doesn’t believe in God.

Before she leaves for her interview Alicia calls her son Zack to apologize to him, but he doesn’t answer. En route to the interview Alicia informs Jon that if the editorial board asks her about Bishop she is not going to lie – she is going to tell them the truth about him financing her pack. Jon reminds her that she might have to not tell the truth now, for the greater good. If she tells the truth, then she won’t get elected and then someone else will – and they will do bad things while they are in control. So, lying is for the greater good. Alicia agrees with Jon and heads in to her interview.