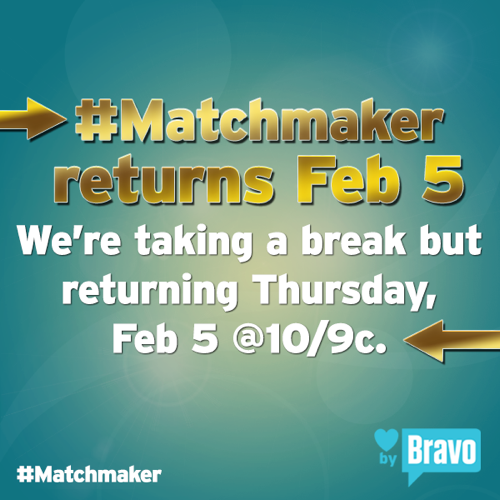 Tonight on Bravo The Millionaire Matchmaker returns with an all new Thursday January 29, season 8 episode 7 called “Chris Manzo and Max Hodges” and we have your weekly recap below. On tonight’s episode, Caroline Manzo from The Real Housewives of New Jersey helps Patti set up her youngest son, Chris.

On the last episode, Patti’s friend Marysol Patton from The Real Housewives of Miami stopped by after she had been convinced by her best friends, Reza Farahan of Shahs of Sunset and Alexia Echevarria, to seek out Patti’s help in finding love. Did Patti give Marysol the confidence she needed to pick the right guy? World famous mixed martial artist Luke Rockhold was handsome, built, and traveled the world as a competitive fighter. Patti was worried he was too much of a player to settle down. Could Patti help Luke fight for love? Did you watch the last episode? If you missed it, we’ve got a detailed recap for you right here.

On tonight’s show as per the Bravo synopsis, “Caroline Manzo from The Real Housewives of New Jersey helps Patti set up her youngest son, Chris. Patti has tried to help Chris in the past, but six years later is he still too much of a mama’s boy to find love? Max Hodges spent years working on air for TMZ. Now that he wants to settle down, will this self-admitted “surfer dude” put in the actual work it takes to romance a girlfriend?”

Tonight’s episode is going to be another drama packed one, which you won’t want to miss. So be sure to tune in for our live coverage of Bravos’ The Millionaire Matchmaker Season 8 episode 7 – tonight at 8PM EST! While you wait for our recap, hit the comments and let us know how excited you are about the new episode of TMM tonight.

First up is Melyssa Ford. She says she hates dating. She’s a model known for music videos and Blood, Sweat and Heels. She was in major hip hop videos and now sells real estate in New York. She says she’s introverted and a nerd and is looking for a mate to share her life with. Patti tells Candace that Melyssa reminds her of Candace. She says everyone takes her the wrong way. David says she’s meeting Melyssa there. Patti leaves for lunch with Melyssa. She tells Melyssa she’s a fan of hers.

Patti asks who her celeb crush is and she says Michael Fassbender but she’s full crayon box in her taste in men. She wants a guy with a degree, who makes good money, wants to get married and kids. She also wants a tall guy. Melyssa says her sexuality is a hindrance in finding the right man and Patti says they won’t lead with it. Patti says guys see her like Jessica Rabbit and that’s not her. She says her most significant relationship was a regular guy from the Bronx. She says he was good and patient but she was too young for what he was offering.

Next is Larry Birkhead – OMG it’s Anna Nicole’s ex and baby daddy. He says he’s very nervous about dating. He says he’s very shy but is confident Patti could find him love. He says he moved to California when he met Anna Nicole but is raising their daughter in Louisville. He splits his job between working on Anna’s estate and his job as a photographer and says he hasn’t had any woman since Anna passed because he’s trying to keep her alive for DannieLynn.

Patti says she fixed Anna Nicole up on her show. She asks what Anna would say and he says she would want him to be happy. He says he’s doing pretty well and says DannieLynn is turning eight. She asks if the house is a shrine to Anna. He says he has estate responsibilities and then there’s DannieLynn. He says he has a houseful of people living in the house but it’s pretty big. His mom, sister and her kids all live there. She asks why women don’t hit on him and he says he doesn’t put out the vibe.

She says he seems to be a care bear who’s always rescuing people instead of taking care of himself. He says he’s confident that Patti gets him. They ask for his celeb crush and he says Jennifer Love Hewitt and someone who will move to the South and not be threatened by the Anna Nicole thing. He says DannieLynn is telling him to go date and Patti says he can’t put walls up. She asks if he’s ready for her to fix him up and why. He says he and his daughter are both ready and he’s not getting any younger.

Patti tells Candace and David that she loves Larry but he can’t pick out his own person. David says if they bring a bunch of girls in, they might recognize him and Patti says they have to protect his daughter. She tells Candace to sit with Larry on a mock date and teach him how to act. She tells them that Melyssa wants United Nations at her mixer. Patti says she’s bringing in Dr Pat Allen to help Melyssa nix the vix.

She introduces Dr. Pat, her guru to Melyssa. Patti tells Dr. Pat they need to get her to stop leading with sex. She asks Melyssa if they want her virtue or her vagina. She says only boys want the vagina first. Dr. Pat says they need to marker her brain. They tell her that her focus on her sexuality is why she’s not married. She says – holy Christ – and Dr. Pat says praying can’t hurt either. Patti is at the mixer and they’re looking over the candidates.

Patti tells them that the male client is a VIP and he’s hot, sweet and a catch. She tells the men they’re getting someone even better. Patti screens the men then moves on to the women. She weeds out a witch, a short guy, a guy with a weak handshake and a guy she says is a c*ckmaster. They narrow it down to their final choices. They have Michelle who already has two kids, Lauren who’s a nurse and Andrea who also likes kids. She picks out two and David agrees. Then she chooses one and they concur.

Patti goes to chat with Melyssa and introduces her to Larry. She tells them to chat while she checks on the daters. He asks how her experience has been and Melyssa says she’s brutally honest. He tells her that Patti is setting him up on a totally blind date and Melyssa says that’s scary as f-k. Patti tells Melyssa that she wants her to met the men she’s picked. Patti thinks Melyssa dressed too sexy but it’s too late. They all seem to recognize her.

Jay tells her she looks gorgeous. She’s worried about not following Patti and Dr. Pat’s advice about not using her sexual energy. Candace is working with Larry pretending to be on the blind date. He starts out with – do you come here a lot. She tells him that’s the worst. He says he’s rusty and is glad to get tips. The guys ask Melyssa what she likes to do. She says she likes bowing, eating, cigars. Larry and Candace are role playing and it’s painfully awkward. He’s not making any eye contact.

Rob asks Melyssa where she’s from – they’re both from Canada. Melyssa says she has no one to talk to about her day and to celebrate her wins with. Rob says he gets that and says it’s tough. Candace tells Patti that Larry isn’t making her feel wanted. Patti takes over as his blind date and tells him to try and pick her up. He asks what she does for fun and she says art. She pushes him through the shy and says look, you have a date.

Melyssa asks the guy what they want and Rob says he wants someone who makes him a better man. She asks about ages. Patti then comes in and tells the guys that it’s done. She asks Melyssa who she chooses and Melyssa says she needs help to choose between two – Rob and Jay. Patti asks what her gut says. Dr. Pat tells Melyssa she heard she was an expert in twirting. Melyssa laughs and says it’s twerking but she’s known for her sexy walk and demonstrates. Dr. Pat then gives it a try.

Larry is meeting his blind date at Universal Studios. He wanders around lost unable to find his date. His date is Michelle and he’s relieved that she’s really cute. She recognizes him and says she was pleasantly surprised. She says Patti didn’t tell her anything but she says what she knows of him all sounds positive. She tells him about her kids and he says that’s nice. She says she’s been single four and a half years and they agree it’s hard when you have kids.

They go on a private tour and Jaws comes for them. He asks her to go to dinner and she says she’s like that. Melyssa goes to meet her date. She says she’s nervous about her choice – she picked Jay (I thought she should have picked Rob). He brings her flowers and is taking her bowling. She throws a gutter and he throws a strike. He asks what she’s going to do. He tells her how to correct her throw and she does and lands the split.

Jay says they have good chemistry and they are having a good time. They go next to get something to eat. Larry and Michelle are also out to dinner. He asks about her kids and she says they’re very social and he his daughter plays well with others. He says he likes that she’s a single parent and all about the kids. She asks what he does when he has time to himself. He says he always wanted to take an RV trip and just pick a place to go.

He gets Michelle to try the Lady and the Tramp noodle trick and they do a little light kissing. Melyssa and Jay are at dinner and he asks her about liking cigars. She says she was a daddy’s girl and he smoked cigars so it’s nostalgic for her. They talk about their fathers then toast to each other. He asks her to go to the patio so he can show her something. He brings her out for cigars. He’s not a cigar smokes but she teaches him the ropes. Jay goes for the kiss then she pulls back a little.

Then they bring Larry in. She says he looks happy and he says he had a great time. He says he took her on a VIP tour at Universal. He says he let go of the care bear and was Jaws. He says it was a great experience and she gives him a big hug. Larry and Michelle are still seeing each other. Melyssa and Jay are not and Melyssa says she’s going to find herself a regular Joe.