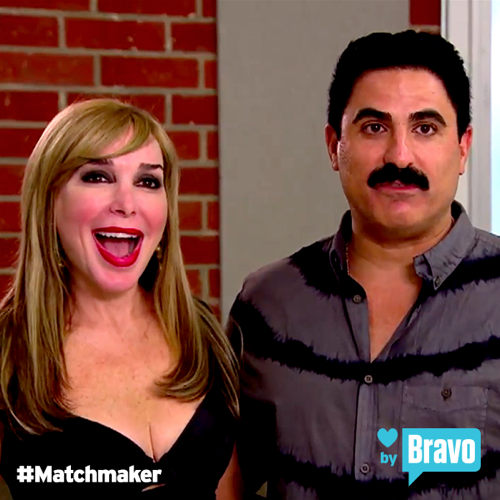 Tonight on Bravo The Millionaire Matchmaker returns with an all new Thursday January 22, season 8 episode 6 called “Marysol Patton and Luke Rockhold” and we have your weekly recap below. On tonight’s episode, Patti’s friend Marysol Patton from The Real Housewives of Miami stops by after she’s been convinced by her best friends, Reza Farahan of ‘Shahs of Sunset’ and Alexia Echevarria, to seek Patti’s help in finding love. Can Patti give Marysol the confidence she needs to pick the right guy?

On the last episode, as a fan of The Hills, Patti was thrilled to get a call from Spencer Pratt and Heidi Montag to set up Spencer’s sister Stephanie. It seemed Stephanie only dated “bad boys” who treated her badly. Did Patti help Spencer and Heidi get Stephanie to drop her bad habit? Kari Whitman was a one-time Playmate turned interior designer to the stars. Patti learned that this gorgeous 40-something was still single because she was unable to leave her exes in the past. Could Patti help Kari move on from the past into a love-filled future? Patti teamed up with Celebrity trainer Tracy Anderson who put her and Kari through a mind, body and soul workout before helping Patti recruit dates at the gym. Did you watch the last episode? If you missed it, we have a full and detailed recap right here for you.

On tonight’s show as per the Bravo synopsis, “Patti’s friend Marysol Patton from The Real Housewives of Miami stops by after she’s been convinced by her best friends, Reza Farahan of Shahs of Sunset and Alexia Echevarria, to seek Patti’s help in finding love. Can Patti give Marysol the confidence she needs to pick the right guy? World famous mixed martial artist Luke Rockhold is handsome, built, and travels the world as a competitive fighter. Patti is worried he’s too much of a player to settle down. Can Patti help Luke fight for love?”

Tonight’s episode is going to be another drama packed one, which you won’t want to miss. So be sure to tune in for our live coverage of Bravos’ The Millionaire Matchmaker Season 8 episode 6 – tonight at 8PM EST! While you wait for our recap, hit the comments and let us know how excited you are about the new episode of TMM tonight.

On #Matchmaker, first up is Marysol Patton who brought her besties Alexia and Reza with her because she’s so shy. She says her parents were married for 50 years. She says her mom can’t help because she’s really sick. She wants Patty to set her up since they’re friends. They’ve been friends for five years so Patty is ready to help. Marysol has been divorced for a year and a half and has been married twice. She’s a Real Housewife of Miami and works in marketing. She also plays tennis a lot.

Alexia and Reza says that Marysol is negative when they try to set her up. She got married on the show they second time she got hitched. He’s out partying seven nights a week so that was bad. Patty says she has no confidence personally and asks what she wants. She says chivalry, career and money. Reza says she can’t be involved in the selection. Alexia says Marysol has no self-confidence. Reza tells her she needs to be sluttier because her vagina is frozen.

Patty says she’s setting up a mixer for her and will call later. Next is Luke Rockhold. He’s a young guy – age 29. He’s a UFC fighter. He’s very focused on his career and has shut women out of his life and wants to settle down. He’s open to love now. Patty says pro athletes are tough because women throw themselves at them. She heads into the ring to chat with him. He’s a top rated athlete from California and lives on the beach. He wants marriage and family.

Then she talks about Luke who is super hot and says they have to watch him. They look over some women for Luke first. It’s mixer time. Reza and Alexia are there to do some pre-screening and Candace and David are going to shop for Luke. The men and women come in. They start with the guys and look for some guys that aren’t so metro. Patty sniffs one guy and says she smells money. There’s a 50 year old guy that looks 25. They all live in LA. Why is she shopping LA for a Miami chick? They choose three for Marysol.

Now it’s to Luke. They talk to a yoga instructor they like because she’s really fit. Emaan is really exotic and has a nice booty. They like Talia the yoga girl but pass on the virgin and the nice girl from Utah. They tell another pretty girl that Luke is so hot he’ll pull the juice from her goose and totally embarrasses her.

Marysol is nervous to meet her three. Patty says Reza and Alexia did a great job picking guys for her. So now it’s a mini mixer. She introduces her to Robert, Scott and Wesley. They chat her up and then she says Wesley’s answers seem very practiced. Patty thought Robert seemed Lazy because he let the other guys do all the work fixing her drink. She tells her to picture the two of them in an elevator and see which one she’d want to be stuck with for 24 hours to decide who take on the master date.

For Luke, Patty chose Talia, Eeman and Tiffani. She hopes he’s mature enough to really want a relationship. She says they’re doing a sangria mixer and tells the girls about his UFC career. She tells him to ask them questions. He asks what each of them do. Unfortunately, Luke starts talking to Kara the bartender who wasn’t part of the deal. That’s who he says he likes. She asks if he’s sure. He says that’s who he wants to take out.

She says she trusts Kara but tells him that he has to ask her out one on one. She brings her over. Kara says they had great chemistry. He says the other girls were great but he says he’d like to bypass them and ask her out. She agrees. For Marysol’s master date, she chose Scott and they’re going on a helicopter tour. They fly over the city and then the observatory. Scott says he likes their chemistry. They fly over the Santa Monica pier.

She asks if he’s a vegetarian but he says he eats everything and he even likes to cook. They land and she says it was a great date. She says he scored a lot of points. Then he says they’re doing a wine tasting and she says that’s one of her favorite things. Kara meets Luke and Patty says she likes Kara because she’s a boundaries girl. Luke meets her to take her out on a jet ski. They hop on and talk while they go out on the water. He lets her drive next and he almost falls off.

They pull up at a boat next and climb on board. Marysol and Scott are at the tasting and they start drinking. She says she really likes his eyes. He asks her about what her girlfriends are going to say and she says she didn’t really tell anyone because she says she wasn’t sure she was going to meet anyone good. She says she’s attracted to him and she’s blushing. They go around the corner to smooch out of sight of the cameras. She’s so pink now. It’s adorable.

Luke takes Kara on the boat and they have champagne and fruit. He talks about his UFC career and she asks about his goals. She says he’s in amazing shape. He says the chemistry is there. She says she wants to settle down with someone who is a best friend. He says it’s all too good to be true. He leans in for a kiss. He says things are going very well and says the cameras may need to leave. Patty goes to the gym for a fight lesson with Luke.

She says he smells good but his package was too close to her face. David and Patty call Scott to see how the date went. He says it was great. Then they Skype Marysol. She says it was really sweet and they had a kiss. She says to invite his ass to Miami. Then they call Kara. She says it went well in the beginning then he asked spit or swallow then tried to grab her ass. Patty says she’ll handle it. They bring him in.

Patty asks him about the date. Luke says it went well. He then touches Candace and Patty asks why he’s touching her. She asks if he’s playing a narcissist game. She brings up the spit or swallow comment and says actions tells the entire story. She says he’s out of here. She says she will knock him the f- out. Marysol and Scott are doing great and are still seeing each other. Kara has refused to see anymore of Luke.