The Mysteries of Laura Recap – Winter Premiere: Season 1 Episode 11 “The Mystery of the Frozen Foodie” 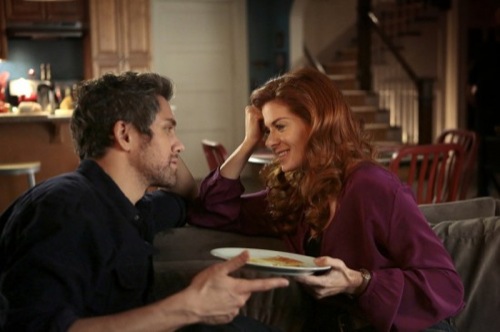 Tonight on NBC The Mysteries of Laura continues with an all new Wednesday January 7, season 1 episode 11 called, “The Mystery of the Frozen Foodie” and we have your weekly recap below. On tonight’s episode a crime in the culinary world is investigated by the detectives, and one suspect complicates things for Laura [Debra Messing] after she develops an intense crush on him.

On the last episode, the 2nd Precinct Detectives were off to the races – horse races, that was — when a fertility doctor went missing and his wife suspects foul play. Adding to Laura’s docket, the twins were accused of bullying at their Tae Kwon Do class, angering a group of nosy mothers. Did you watch the last episode? If you missed it, we have a full and detailed recap right here for you.

On tonight’s episode as per the NBC synopsis, “the 2nd Precinct detectives enter New York’s culinary world to take on a chilling case. But things start heating up for Laura when a potential suspect turns into a serious crush.”

We will be blogging The Mysteries of Laura season 1 episode 10 with all the up-to-the-minute details at 10PM EST so make sure to come back to this spot and watch the show with us. Make sure to refresh often so you get the most current info! In the meantime, sound out in the comments and let us know what you think of the series.

Tonight’s episode of Mysteries of Laura begins with team bonding night, Laura, Billy, Meredith, and Jake are out drinking and playing darts. They make a bet that whichever teams wins will own the other team for the rest of the week.

The next day they head to work where a John Doe was found frozen in a dumpster full of trash bags. The coroner reveals that the cause of death was carbon monoxide – and he was frozen after he died. Meanwhile, Jake and Billy are busy being Meredith and Laura’s errand boys.

They find a lighter in the victim’s pocket with a fingerprint on it – it belongs to a convicted felon named Selena. Laura and Billy head to a 12 step program for sex addicts where Selena is supposed to be. Selena reveals that the victim’s name is Peter, and the only reason her prints were on his lighter is because she bummed a cigarette from him during their last meeting. Selena has an alibi – but she says that Peter was a chef at Alamede, so Billy and Laura head there.

Laura and Billy chat with the owner of the restaurant JT Thompson, they reveal that Peter was found dead in the morning and they think he was dumped in the trash bins at the restaurant. The owner reveals that their freezer is broken, so they brought in hundreds of pounds of dry ice to save their food and they are really busy right not. Laura and Billy check out their freezer and realize that someone had been locked inside with the dry ice and tried to break out.

JT explains that Peter stayed behind last night after the restaurant closed to wait for the dry ice delivery. They check the time clock and realize that one of the other cooks, Tony, stayed behind with Peter and he didn’t show up for work the next day. Laura and Billy head out to find Tony and question him – after a brief chase they finally track him down. Tony insists that he left work early, and Peter was supposed to clock him out for him. He has receipts that prove he was at a club when Peter was murdered so Laura says he is free to go.

Laura heads back to the police station without anything, and Meredith reveals that she learned during interviews that the only person who had any beef with Peter at the restaurant was the owner J.T. Tony shows up at the station to apologize for running from Laura and gives her a raspberry tarte and flirts with her. After he leaves, Meredith reveals that Peter and JT got in to a huge fight the night that he was killed over what color table cloths to put on the tables during dinner service. Peter wanted to use the red table cloths, and he red strings all over his body. Meredith and Billy rush to the laundry service to get the restaurant’s dirty red tablecloths before they are washed.

They bring Peter’s boss JT in for questioning and he reveals that he found Peter dead in the freezer, but he didn’t want to have to shut down the kitchen so he just tossed his body in the trash. He insists that Peter was already dead and thinks that they should talk to his psychotic girlfriend that was always showing up screaming, she had bright blue hair. Laura realizes that he is talking about Selena, the girl from the sex addicts class.

Laura receives a text message from Tony, asking her on a date. Max encourages her to say “yes” and she invites him over to her house. Jake gives her a foot massage and is not thrilled to hear that she has a date. Meanwhile, Billy and Meredith visit Selena – who confesses that she lied and was dating Peter – but claims she had nothing to do with his death. Laura heads home and has a romantic date with Tony – and he cooks her dinner and then they have a hot makeout session on the couch. And..then Jake walks in and catches them. Tony rushes out, and Laura screams at him for using his emergencykey not during an emergency.

Jake explains that they got a break in the case and he wanted to tell her. They ran his phone bill, and found out he was calling a marijuana drug dealer named Trenton multiple times. The next morning they raid Trenton’s pot farm and realize that it isn’t a pot farm anymore, but they are now growing organic food. Trenton has an alibi and he says that he and Peter were partners and were going in to business together in an organic restaurant. But, a few weeks ago he gave Trenton all of his money back and said that he changed his mind.

At work Jake apologizes for crashing Laura’s date, meanwhile Max looks in to Peter’s finances and uncovers some bizarre transactions. A renowned food critic named Judith Hansen was paying Peter to go to restaurants and taste all of the food for her. Meredith and Max go to a restaurant where Judith is doing the tasting and realize that she has lost her sense of taste and that’s why she hired Peter. Meredith accuses her of murdering Peter to keep her secret so she didn’t lose her job as a food critic and arrests her.

At the precinct, Judith confirms she lost her ability to taste and Peter was helping her, but she never would kill him. She does reveal that Peter just bought a restaurant, Billy and Meredith meet with his real estate broker and reveal that he changed his mind and bought a house instead for his girlfriend and his new baby. They head over to the house and find that it has a crib in it.

Laura goes to Tony’s food truck to ask him about Peter’s girlfriend and baby. He had no idea Peter was going to be a dad, or who his girlfriend was. While they are making out, Tony mentions that the restaurant owner’s wife Carmen switched to pasteurized eggs last week. Laura suddenly realizes who the killer is and says she has to go – leaving Tony dumbfounded.

Laura rushes to the restaurant and confronts TJ’s wife Carmen, who confesses that she switched to pasteurized eggs because she is pregnant. Carmen explains that Peter wanted her to leave TJ and have the baby with him. Laura accuses Carmen of sneaking out of her house and meeting Peter at the restaurant and locking him in the freezer – Carmen admits to killing Peter and Laura arrests her and leads her away in handcuffs.