The Mysteries of Laura Recap 12/10/14: Season 1 Episode 10 “The Mystery of the Fertility Fatality” 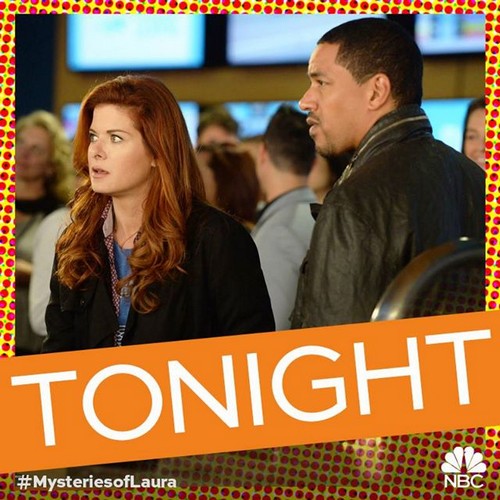 Tonight on NBC The Mysteries of Laura continues with an all new Wednesday December 10, season 1 episode 10 called, “The Mystery of the Fertility Fatality” and we have your weekly recap below. On tonight’s episode a fertility doctor vanishes and his wife suspects foul play, so the detectives investigate and find themselves heading to the racetrack. Meanwhile, Laura [Debra Messing] learns the ire of a group of moms when the twins are accused of bullying others in their marital-arts class.

On the last episode, when a couple was found murdered in their apartment, Laura and the team investigate to determine if a religious motive was at play. Meanwhile at home, a familiar – if not so friendly — face visited Laura and Jake during their search to find a replacement nanny for the boys. Did you watch the last episode? If you missed it, we have a full and detailed recap right here for you.

On tonight’s episode as per the NBC synopsis, “the 2nd Precinct Detectives are off to the races – horse races, that is — when a fertility doctor goes missing and his wife suspects foul play. Adding to Laura’s docket, the twins are accused of bullying at their Tae Kwon Do class, angering a group of nosy mothers.”

We will be blogging The Mysteries of Laura season 1 episode 10 with all the up-to-the-minute details at 10PM EST so make sure to come back to this spot and watch the show with us. Make sure to refresh often so you get the most current info! In the meantime, sound out in the comments and let us know what you think of the series.

Tonight’s episode of the Mysteries of Laura begins at night in a horse barn, a man in a suit is being stabbed by someone in the chest with a syringe.  The assailant slips away in the night dressed in black with a hood on.

At the police station the next morning, Laura is meeting with a mother form her twins’ school – she learns that the boys have been bullying and beating up her daughter.  Laura reassures her she will talk to the twins.  Laura catches Jake eating a tofu burrito, and he confesses that he has high cholesterol and if he doesn’t get it down the premiums on his insurance are going to go up.  Laura freaks out because she remembers that they still have the same insurance policy, and won’t let Jake have a doughnut for breakfast.

Laura and Billy head out on a missing person case.  The mayor called it in because his golf buddy Karl Foster didn’t show up to tee time and his wife is freaking out.  Laura visits his wife and she reveals that Karl has a successful fertility practice he runs with his partner Dr. Lindsey.  His wife is certain that he wasn’t having an affair, and knows that something bad happened to him.

Laura and Billy head to Karl’s office to snoop around and find out he had a standing appointment every two weeks with someone named “BB.”  He also had a cruise scheduled next week that his wife didn’t know about, and he has a picture in his desk of a woman on a horse.  They flip the picture over and it has the name “beautiful Becky” on it.  They head to the horse races since the woman in the picture was wearing a shirt from the track.  Laura asks around and learns that Karl is a big better but he always loses.

They head to the VIP room and the bartender confirms that Karl is a regular, they also learn that “Beautiful Becky” and “Bahama Cruise” are the names of race horses, and the blond woman in the pictures is actually named Jenna.  Laura and Billy head to the horse barn to see Beautiful Becky and find Karl dead in her stall.

The coroner arrives and says that Karl was killed around 10:00 PM the night before, and it looks like a heart attack but its not – he was killed by tiny puncture wounds in his chest.  Becky’s trainer arrives and wants to know what is going on.  Billy informs him that if they don’t find out who killed Karl – they are pulling his horse out of the race that night.  The jockey insists he knows nothing about it and his horse is cleaned and has been tested for drugs – but he says Billy should talk to the jockey Danny.

Billy heads in to the locker room to find Becky’s jockey – and as soon as he says he is a police officer one of the jockeys bolt out the back – he chases him and catches him hiding in a trunk in the bar.  Billy drags the jockey back to the police station and he confesses that Karl was his doctor and he was giving him hormone shots to boost his metabolism and help him lose weight.  The jockey says that Karl had no issues at the track, but one of his woman patients at his clinic attacked him one day with pepper spray.

Alicia the babysitter calls Laura and tells her to get home ASAP.  She says that her livingroom is full of soccer moms and she needs to get home before she winds up getting sued because her twins keep beating up all the kids at school.  Laura rushes home and realizes that the moms aren’t suing her – they are staging an intervention for her because she comes from a broken home and is yelling at her kids too much.

Billy heads to Dr. Foster’s clinic and meets with his partner.  She insits that everyone loved Dr. Foster and it wasn’t unusual for a patient to freak out on him because they are taking crazy hormone shots.  Foster’s partner insists that it was nothing, but the woman that sprayed him with pepper spray was a patient named Daisy Winters.

Meredith visits Daisy Winters and learns that Daisy was just mad that Dr. Foster was putting her on hormones for an extra week so that he could go on vacation.  Daisy says that she didn’t hurt Foster, but they should talk to the nurses at his clinic because a nurse named Alaina was stealing embryos and selling them to patients.  Daisy says Dr. Frost just found out what Alaina was up to and she might have killed him so that he didn’t have her arrested.  Billy questions Alaina and she reveals that Foster would never turn her in – because he and his partner are doing something way more illegal with all of their patients, she just isn’t sure what exactly it is.

Laura goes undercover to see Dr. Foster’s partner and tells her that she took a home pregnancy test and it was positive.  The Dr. pulls up an ultrasound and then plays a recording of a heartbeat and tells Laura Congratulations you are pregnant.”  Laura pulls out her badge and says she knows she is lying and arrests her.

Jake questions Dr. Foster’s partner and she confirms that they were scamming their patients, but they were doing it to give them “hope” that after their miscarriage they could get pregnant again.  She insists she didn’t kill Dr. Foster though.  Laura and Billy pay all of the families that Dr. Foster scammed and lied to and told them they were pregnant a visit.  They arrive at a woman named Sarah Harvel’s house – and she says that she is pregnant again, they don’t have the heart to tell her that Dr. Foster lied to her.  Laura starts sneezing because she is allergic to horse dander – and realizes that someone at the Carvel house has been to the horse barn.  Sarah says her husband did upstairs cooking – and Laura runs up to find him and tells Billy to call back up.

They head upstairs and to the roof where Sarah’s husband Jason is grilling – he admits he knows that Dr. Foster was scamming them.  Jason says he went to the race track and he stabbed Foster with a needle, but it was empty and he has no idea how he could have died.  Jason is shocked, but refuses to come down to the police station, he douses himself with lighter fluid and threatens to light himself on fire.  Laura pushes him over the roof so that he can’t light himself on fire – because she knows that their back up has sent up a trampoline in case he jumped.  Back at the police station Jake lectures Laura that they can’t go pushing their suspects off roofs, even if there is a fal-mat set up below.  Laura heads off to bust the soccer mom who has been accusing their sons of beating up her daughter – because Max found proof on the internet that it is a scam.