The Mysteries of Laura Recap 2/11/15: Season 1 Episode 14 “The Mystery of the Popped Pugilist” 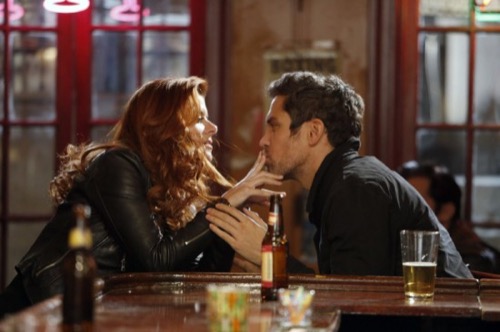 Tonight on NBC The Mysteries of Laura continues with an all new Wednesday February 11, season 1 episode 14 called, “The Mystery of the Popped Pugilist” and we have your weekly recap below. On tonight’s episode a drag queen is murdered, and the case takes a twist when the victim’s link to a fight club is unearthed. Meanwhile, Laura [Debra Messing] reunites with an old pal and has a fun night out on the town, which leads to an unexpected encounter with Tony.

On the last episode, Arson found our detective team investigating the death of a teenage boy. The case sparked chemistry between Jake (Josh Lucas) and guest star Anastasia Griffith as Angela, a former firefighting flame, while Laura (Debra Messing) tried, unsuccessfully, to remove herself from police work to focus to the twins’ Winter Carnival. Did you watch the last episode? If you missed it, we have a full and detailed recap right here for you.

On tonight’s episode as per the NBC synopsis, “when a female impersonator is murdered, Laura (Debra Messing) and the team dive into the raucous New York City drag world. But expectation is turned on its head when we find out that the victim was a member of an underground fight club. Meanwhile, Laura reconnects with an old friend (guest star Kelly Rutherford), leading to a wild night out on the town and a surprise encounter with Tony (Neal Blesdoe). Josh Lucas, Laz Alonso, Janina Gavankar, and Max Jenkins also star.”

We will be blogging The Mysteries of Laura season 1 episode 14 with all the up-to-the-minute details at 10PM EST so make sure to come back to this spot and watch the show with us. Make sure to refresh often so you get the most current info! In the meantime, sound out in the comments and let us know what you think of the series.

Michael Moretti was murdered on tonight’s all new episode and at first Laura (and her colleagues for that matter) were kind of stumped about what he could have been into. Apparently they had found a bra, a distinctive orange lipstick, and plenty of Cher meets Gaga CDs on him when he was found. But, afterward, they honestly took that to mean he must have had a good night.

So Laura, with help from the Coroner, took a second look at their victim. And the telltale signs of spanx burn around the waist along with Band-Aids on the heel helped settle a few things.

For instance, their victim was a drag queen. The Band-Aids protected his feet while he worse stilettos and his CDs was just his way of practicing before he took the stage as a Cher impersonator with his best friend who was a Lady Gaga impersonator. And his credit card records show he was shopping nearby a popular drag bar. So they knew who “Mickey” was. However, they still didn’t know why anyone would want to kill him.

Mickey was shot in broad daylight by someone smart enough to carry around a silencer. Yet, from all appearances, he had no enemies. Even the guy he had gotten into a scuffle with not that long ago hadn’t held onto a grudge.

Hence, the detectives had to work the “drag” angle. They had to see if anyone wanted to hurt from dressing up like Cher. It seems Mickey was always a cross-dresser. Even as a kid back in the old neighborhood and sadly not a lot of people are mature enough to deal with that.

Although, a friend of Mickey says he didn’t have a problem with people they knew. A lot of times people would simple assume Mickey was gay but the man himself was very adamant he was straight. Possible too adamant!

The detectives eventually followed a lead and they found out Mickey was part of an underground fight club. And, in case you’re wondering; these underground are nothing like boxing or a real MMA fight. Leagues have rules and fight clubs don’t. Meaning anything goes and their victim would practically beat the crap out of people for seedy money on the side.

It seems like a reckless career choice but it did have some perks. These underground fights tend to have their own groupies and one of these ladies was caught on camera wearing the very distinctive orange lipstick that was found in Mickey’s car!

This woman, as it turns out, was an actual manager. Donna McKinney worked in the MMA and she would promote certain fighters.

So, as Billy and Meredith went in undercover to investigate Donna; Laura went to book club which isn’t as boring as it sounds.

Laura’s old friends from the academy days had decided to all get together again. And so they used their traditional excuse of book club to go out partying. But time has taken its toll and someone people just can’t drink like their twenty year olds anymore.

Thus Laura was holding her friend’s hair back while Billy and Meredith were narrowing down their list of suspects. Donna turned out to be a no go though she did tell them about Mickey’s friend that came in the other day waving a gun in her face. Apparently, Mickey’s childhood friend Eric thought he was still Mickey’s manager so he came in demanding thirty grand for all that Mickey did for Donna before he died.

Oh, and he mentioned Donna could end up like Mickey if she didn’t pay him. So right away it seemed like Eric was their guy. Yet, something wasn’t adding up and Jake felt like there was more to the story.

So he went back to the video. A lot of the underground fight were recorded and he caught something watching one of them. One video showed a fixed fight. Mickey it appears was supposed to throw a fight but at the last minute lost his temper and won instead.

And after that, Jake Laura went about handling the case but still somehow reached the same conclusion at the same time – Eric wasn’t their killer.

Eric had gotten himself into trouble and Mickey, his very good friend, was going to help him out. But then he messed up the fixed fight and now he’s dead. And Eric is going around threating people in order to get his hands on some much needed cash.

In the end, it didn’t take a lot of prodding to get Eric and the local guy handling bets to spill on a name but taking down their killer also meant a shutting down a terrible pizza business. So Laura didn’t mind.