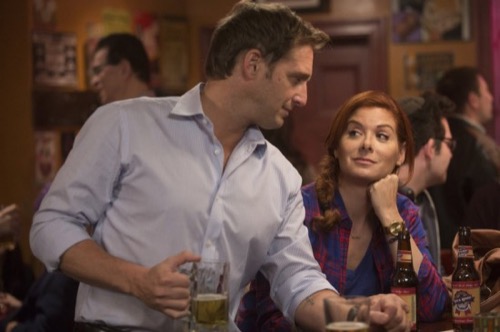 Tonight on NBC The Mysteries of Laura continues with an all new Wednesday February 18, season 1 episode 15 called, “The Mystery of the Alluring Au Pair” and we have your weekly recap below. On tonight’s episode an au pair is murdered, and the investigation leads police to an escort ring.

On the last episode, when a female impersonator was murdered, Laura (Debra Messing) and the team dived into the raucous New York City drag world. But expectation was turned on its head when we found out that the victim was a member of an underground fight club. Meanwhile, Laura reconnected with an old friend (guest star Kelly Rutherford), leading to a wild night out on the town and a surprise encounter with Tony (Neal Blesdoe). Josh Lucas, Laz Alonso, Janina Gavankar, and Max Jenkins also star. Did you watch the last episode? If you missed it, we have a full and detailed recap right here for you.

On tonight’s episode as per the NBC synopsis, “An au pair is murdered, and the investigation leads police to an escort ring. Meanwhile, a new detective arrives, and she’s assigned to explore whether Jake and Laura have committed any transgressions”

We will be blogging The Mysteries of Laura season 1 episode 15 with all the up-to-the-minute details at 10PM EST so make sure to come back to this spot and watch the show with us. Make sure to refresh often so you get the most current info! In the meantime, sound out in the comments and let us know what you think of the series.

A couple of weeks ago, Laura and Jake had a near miss. It seems some signals were misread while the two were working together undercover and they almost fell back into some old patterns because of it. However, things were stopped and since then the two of them have tried to put it behind them.

Yet on tonight’s all new episode of “The Mysteries of Laura”, what nearly happened in being drugged up again because of an internal review. Apparently, the Chief of Detectives has heard something about inappropriate behavior at the work place so to get to the bottom of things they’ve sent in their own detective to assess the matter. And although Detective Francesca “Frankie” Pulaski looks like a bagful of sugar and rainbows – she’s already warned Jake that if she does find something then one or maybe more will end up getting transferred out of the second precinct.

So careers are riding on the line here when Laura took the first case she could to get out of the office.

She had thought the case would be simply mugging in the part but certain things didn’t add up. Like the way their victim was killed for one. Because Viviana Costa wasn’t just murdered – she was shot execution style.

And so Laura and Meredith started to look into Viviana. She had recently came to this country after securing a work visa and, yet when they looked up her address; they found out she had been residing in a penthouse. Though, as it turns out, the penthouse had belonged to her employer.

Viviana worked as a nanny. And she was supposed to be with her charge, little Tucker, at the time of her death. So Tucker’s mother wanted to know where her son was.

A city wide search was conducted and as Tucker was believed to have been kidnapped by his father who had lost custody earlier – the investigation was directed on finding father and son. And while it was revealed that Tucker’s father did in fact take him – Tucker’s father was also proven not to be his nanny’s murderer. He was just a desperate father that noticed the nanny was late picking up his son from school and decided to take advantage of it.

So the hunt for Viviana was still on and the detectives were left with less leads than when they started.

No one knew Viviana. And the only person that was close enough to help – that being Tucker – had autism. So the only thing he could say was gym. And the case merely had to develop from there.

Viviana had a gym bag and in it she had a bunch of numbers. And as they were digging into Viviana’s life – they find out she was more than an au pair. Viviana was also working as a call girl. A high class call girl that is.

A friend/ coworker of hers later fessed up to there being a problem between Viviana and their boss. So the team conducted another undercover mission and yet they found out the boss wasn’t really a problem. The boss was actually kind of nice and had argued with Viviana because she was worried.

It seems that Viviana had a client that had bruised her and her boss had wanted to know how she could help. And, well, she couldn’t because the “client” had also been seeing Viviana on the side.

Viviana had been dating a client unbeknownst to everyone else and on the morning she was murdered – she had been dumped. But he’s not the one that killed her. Nor was it his crazy that had been spreading false internet rumors about her and following her around. Yet, his ex did record Viviana get in someone else’s car.

Sadly for Viviana, in spite of her color life, she was killed because she tried to get her brother to come to the states.

Viviana’s brother also had autism. And so his sister felt he would be better of living with her. She bribed a man that could help her get a visa for him and when he began demanding even more money – she then threatened to turn him in. So he killed her to keep her shut. And Laura identified him as their killer because of his car.

He had gotten the same car that was in ”Knight Rider”.

As for Frankie, it seems that she came out to their offices after Laura’s complaint about her man child of an ex-husband finally reached her desk some several months later. So she never did follow up on her threats about transferring out certain people. Instead Frankie ended up joining the team as new regular cast member.