The Mysteries of Laura Recap 2/25/15: Season 1 Episode 16 “The Mystery of the Exsanguinated Ex” 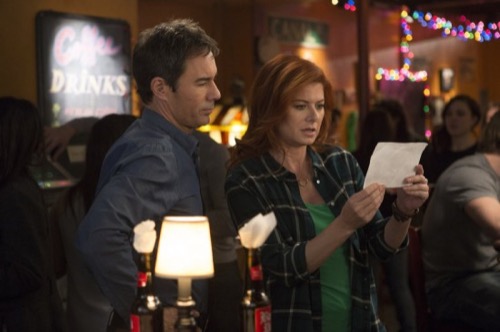 Tonight on NBC The Mysteries of Laura continues with an all new Wednesday February 25, season 1 episode 16 called, “The Mystery of the Exsanguinated Ex” and we have your weekly recap below. On tonight’s episode Laura’s[Debra Messing] ex-fiancé becomes a murder suspect in a former beauty queen’s stabbing death.

On the last episode, an au pair was murdered, and the investigation lead police to an escort ring. Meanwhile, a new detective arrived, and she’s assigned to explore whether Jake and Laura had committed any transgressions. Did you watch the last episode? If you missed it, we have a full and detailed recap right here for you.

On tonight’s episode as per the NBC synopsis, “Laura’s ex-fiancé becomes a murder suspect in a former beauty queen’s stabbing death. As Laura reminisces, the investigation leads the team into the world of holistic healing.”

We will be blogging The Mysteries of Laura season 1 episode 16 with all the up-to-the-minute details at 10PM EST so make sure to come back to this spot and watch the show with us. Make sure to refresh often so you get the most current info! In the meantime, sound out in the comments and let us know what you think of the series.

Laura’s ex-fiancée, Dr. Andrew Devlin, is back in her life and yet it doesn’t look like he’s going to be staying around because on tonight’s all new episode of “The Mysteries of Laura” it’s actually Laura’s job to figure out whether or not he murdered ex-wife. Consequently, Andrew kind of made it hard on himself when he found his dead ex and immediately tried to call the coroner to have her declared dead. And normally, when people find a murdered body, cops tend to be the first people they call – not the corner.

However, that phone call was just the beginning of unexplainable behavior. Because once Andrew saw Laura again, while they were technically still in the room with his ex’s dead body; he tried to flirt. And Laura (surprisingly) was the one that had to tell him to act like an adult.

Andrew has apparently changed, quite a lot in fact, since they used to be engaged. The man he is now is a pompous self-centered jerk. And he’s managed to tick off mostly everyone he’s met. Including his late ex-wife Emma who it seems took him to cleaners during their divorce.

Emma was being paid a hundred grand per month until she eventually remarried and Andrew has already said she was never going to give up the seven figures she was getting from him. So, when Laura was initially questioning him, it really did look like he had a strong motive for murder. Yet what ended up clearing him early on was his alibi.

There’s a witness that saw Andrew miles away during Emma’s murder. Hence Andrew couldn’t have killed her. Or if he did – he hired someone else to do it.

You see Emma was terrified of someone possibly hurting her in the days leading up to her murder. She told the guy that rearranged her “aura” that she was scared of someone and she also told her sister that if anything ever happened to her then it had to be Andrew behind it. So all signs continued to point to Andrew even though he had been cleared.

Emma’s sister Connie flew into New York after her sister’s death and according to her Andrew was a borderline sociopath. She told the detectives that Andrew was manipulative and often abused her sister. So Jake wanted to bring Andrew in but Laura was the one that told him it couldn’t be Andrew. She said she knew him and she knew he couldn’t this.

But then she caught him in a lie. As it turns out Andrew’s original alibi didn’t pan out under scrutiny. The maid that saw him asleep on his couch was bribed into doing that. Andrew agreed to do her father’s surgery for free and in return he got an alibi.

Then Laura found out and she told him she knew he was lying so then he told her the truth. He was actually with a prostitute on the night his ex-wife died. And the woman in question did verify his alibi and that was at the cost of possibly getting arrested for what she does for living. Yet, again, Andrew hurt himself because he had held back on telling the full truth. While he confessed to hiring a woman – he failed to mention his yacht. The same one the police never got a chance to check.

And when they did check it – they found the murder weapon.

Yet, despite all of this, Andrew still claimed his innocence and he begged Laura to listen to him. And when she did start listening to him – she realized something. Andrew and his ex got married on a bright sunny day. However Emma told her Aura guy that marrying during a rainstorm was a bad omen.

And that’s when it dawned on Laura. Emma had gotten remarried and although it was later annulled – that short-term marriage invalidated her divorce agreement. Now there was only four people that knew of the marriage and one that had the means to blackmail Emma over this information – her sister.

Connie had killed Emma when she refused to keep paying her and she was going to frame Andrew in the hopes of inheriting the whole estate. But that was never going to happen because her sister had bequeathed everything to her charities in her will.

So Connie was arrested for the murder of her sister and Jake finally faced the real reason he wanted Andrew to be guilty this entire time. He was jealous and it looks like he had a reason to be. Andrew still has an effect on Laura.