The Mysteries of Laura Recap 2/4/15: Season 1 Episode 13 “The Mystery of the Deemed Dealer” 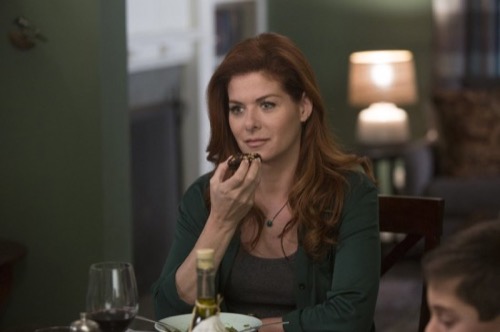 Tonight on NBC The Mysteries of Laura continues with an all new Wednesday February 4, season 1 episode 13 called, “The Mystery of the Deemed Dealer,” and we have your weekly recap below. On tonight’s episode the detectives head to a prestigious prep school to investigate the death of a star athlete, and chemistry erupts between Laura [Debra Messing] and Jake [Josh Lucas] when they work undercover on the case together.

On the last episode, Arson found our detective team investigating the death of a teenage boy. The case sparks chemistry between Jake (Josh Lucas) and guest star Anastasia Griffith as Angela, a former firefighting flame, while Laura (Debra Messing) tried, unsuccessfully, to remove herself from police work to focus to the twins’ Winter Carnival. Did you watch the last episode? If you missed it, we have a full and detailed recap right here for you.

On tonight’s episode as per the NBC synopsis, “an investigation into the death of a star athlete leads the detectives to the dark side of one of NYC’s most elite prep schools. Laura (Debra Messing) and Jake (Josh Lucas) team up undercover and sparks fly. Laz Alonso and Janina Gavankar also star.”

We will be blogging The Mysteries of Laura season 1 episode 13 with all the up-to-the-minute details at 10PM EST so make sure to come back to this spot and watch the show with us. Make sure to refresh often so you get the most current info! In the meantime, sound out in the comments and let us know what you think of the series.

A teenager was intentionally run over by a car on tonight’s all new episode of “The Mysteries of Laura” and everyone seems to think this kid could have been involved in drugs. And though isn’t exactly being kind to this kid who’s being judged so quickly – to be fair to the detectives, young Miguel Santos happened to be carrying around 1500 dollars and a bag of pot when his body was found. So it wasn’t that much of a leap for them to assume Miguel might have been a drug dealer and that whoever ran him over could have done so out of revenger or spite.

Plus, a detective from the Narcotics unit later informed them that the location of where Miguel’s body was found is also known to have gang activity.

So the detectives took the next necessary step and held a sting. They weren’t actually looking to book anyone, but they did want answers and knew men on the defensive will surely give up a friend rather than go down for possession. However, once they did get their hands on a gang member, he informed them that Miguel had nothing to do with drugs. In fact he said Miguel was a good kid. And this was backed up by mostly everyone that came into contact with Miguel.

Miguel was well-liked and apparently he was also athletic. Months earlier, Miguel was offered a full scholarship to a prep school because of his hockey skills and the only reason he didn’t immediately say yes to it is because his father, a working class man, had some misgivings about the school. So, rather than listen to his father, Miguel transferred schools without the older man’s knowledge.

Thus, the team started to form a new theory. They wondered if maybe Miguel started selling drugs in order to get into the in-crowd. But surprisingly the prep school didn’t want to help the detectives in their investigation.

So Laura had to go behind their backs and pretend to be an interested mom that wants to enroll her kids there. And what she found out snooping on her is own is that they really were wrong when they kept trying to pin Miguel down as a drug dealer. It looks he was what he seems – a good kid. Who also happened to be frequently drug tested by his coach and who the school’s actual drug dealer referred to as a goody-two-shoes.

Another thing the drug dealer mentioned is the only thing Miguel did that was even somewhat dubious was harassing a girl with constant text messages. Sounds pretty harmless but if the school board had eventually suspended Miguel for a week because of it then it must have been bigger deal than it sounds.

Later, Laura and Jake went back to the school undercover and what they found out at the parent’s event is that the text messages Laura had heard about was much worse than the kids at the school even knew. As the story goes, Miguel was accused of sexual harassment and his accuser’s case against him was deemed too unsubstantial. So Miguel, a star hockey player, was given a week suspension and returned school like nothing ever happened.

However, as Laura and Jake kept on trying to dig into this story, the pair was nearly caught breaking into the school’s files. So to throw off suspicion – the two of them found a closet and were “caught” drunkenly making out. They did that just so they could save their cover but Jake took what happened to a whole new level. And, afterwards, he went back to Laura’s place hoping to continue from where they left off.

Laura on the other hand knew she didn’t want to backtrack. So she told Jake to sleep it off and on a side note she asked him to stop trying to ruin her chances of moving on. Earlier she had found he had warned guys away and that he was keeping tabs on her dating life.

Jake still somehow caused problems for Laura when the next morning they both showed up late for work and that got the busybodies talking about them. But, by then, their case had taken another turn. Because Miguel wasn’t guilty of those text messages. Someone on his hockey team had framed him in order to get his spot on the ice and show in front of college recruits. Though, Spencer swears he stopped at text messages and that he dropped what he was doing the moment Miguel came back to school. And Laura’s gut feeling told her he wasn’t lying.

She however knew who had killed Miguel. And that was Spencer’s girlfriend. Spencer had been wait-listed at Princeton and seeing as she got early admissions – she wanted him to go with her. So she killed and framed Miguel to get him out of the way.

She planted the drugs and money on him just so that she could get her own way in the end. And while she tried to gain Laura’s sympathy during her arrest – Laura told her to save it for the jury. Maybe they’ll buy her rich bitch crime.