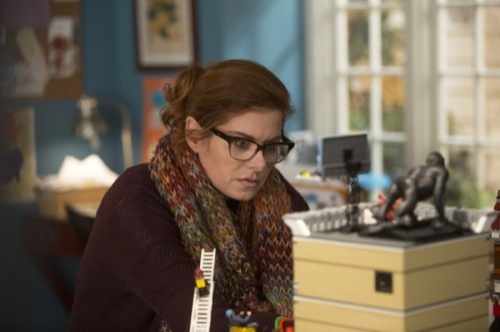 Tonight on NBC The Mysteries of Laura continues with an all new Wednesday January 14, season 1 episode 12 called, “The Mystery of the Fateful Fire” and we have your weekly recap below. On tonight’s episode a teenage boy’s arson ebraeath has Jake working with a firefighter he used to date, and their relationship begins to reignite. Meanwhile, Laura [Debra Messing] wants to assist with the twins’ winter carnival, but she struggles to get time off from her job.

On the last episode, the 2nd Precinct detectives entered New York’s culinary world to take on a chilling case. But things start heating up for Laura when a potential suspect turned into a serious crush. Did you watch the last episode? If you missed it, we have a full and detailed recap right here for you.

On tonight’s episode as per the NBC synopsis, “Arson finds our detective team investigating the death of a teenage boy. The case sparks chemistry between Jake (Josh Lucas) and guest star Anastasia Griffith as Angela, a former firefighting flame, while Laura (Debra Messing) tries, unsuccessfully, to remove herself from police work to focus to the twins’ Winter Carnival.”

We will be blogging The Mysteries of Laura season 1 episode 12 with all the up-to-the-minute details at 10PM EST so make sure to come back to this spot and watch the show with us. Make sure to refresh often so you get the most current info! In the meantime, sound out in the comments and let us know what you think of the series.

Tonight’s episode of Mysteries of Laura kicks off with Laura at a coffee shop cursing out the cashier and accusing him of “shortchanging her.” She dumps out her purse, tampons and tissues and all, and produces her receipt and he gives her the correct change. Afterwards a mom inside the coffee shop introduces herself and begins rambling about the twins’ winter craft party at school – apparently Laura is on the sign up sheet and she had no idea.

Laura heads to work – and Jake confirms that he signed her up for decorations at the winter carnival. She has to design and construct a booth, bake 200 snow man cookies, set up a ring toss game, and make decorations. Jake reassures her that he will help her. When he finds out that it has to be done in 48 hours, he tells her to just tell the PTA that she can’t do it. Laura says she needs two days of vacation time – and he agrees to give it her. Laura and Max get on the winter carnival case – and a woman named Angela Ryan arrives and introduces herself and says that she is investigating an arson with a John Doe in the basement. Laura sends her over to Jake since she is on vacation – and then she realizes that Angie is actually Jake’s ex-boyfriend. Laura is obviously jealous when Angela and Jake are flirting – she leaves to get the carnival stuff ready and tells Max to keep her updated on Angie.

Angela and Jake head to the fire and meet up with Billy and Meredith. The John Doe died of smoke inhalation, he is an Asian male in his late teens. They think that he may have been homeless because he didn’t have a coat or shoes on. The “hero” that saved everyone from the fire, Gil, says that he has never seen the John Doe before and if he knew he was in the basement he would have saved him. They are baffled because John Doe had hot pepper rubbed all over his wrists. Max calls Laura and fills her in – she says that rubbing pepper on your joints is an old Asian remedy, and says that they should check out the basketball courts to see if anyone recognizes him.

Jake, Meredith, and Billy head to the basketball courts with John Doe’s picture. The ball players recognize him and ID him as Kevin Park, a 17 year old that was at the courts seven days a week. They call Kevin’s parents and learn that he had just ran away from home because his parents told him he couldn’t play basketball anymore until he got his grades up.

Meredith calls in one the woman, Gloria, from the apartment building in for questioning. She explains that she was in the basement doing laundry and she smelled smoke – thankfully Gil was able to get up to the second floor to save her son Shawn. She says that it was the landlord Grant who started the fire – he has been trying to bully her in to moving out and she couldn’t afford to, so he burnt down her apartment. They check in and the slumlord has an iron-clad alibi. Jake and Angela are sure that the slumlord hired an arsonist to do the dirty work for him, so they just have to find out which NYC arsonist it was that he hired.

After doing some digging, they realize that slumlord Grant has a convicted arsonist named Jasper living in one of his other buildings. They pay Jasper a visit to see if Grant gave Jasper a rent discount to set his old building on fire. Jasper runs out the back when Jake and Angela knock on his door, so tey have no choice but to chase him. Jake can’t catch him so he pulls a gun on him, but Angela breezes past him and tackles Jasper and cuffs him and jokes that she is in better shape.

They bring Jasper in for questioning and he insists that he is a changed man and didn’t set the fire at the apartment building. He confesses that he watched the fire – but he saw a thug with prison tattoos running from the fire that night, then he lawyers up. Laura watches the interrogation between Angela and Jake – she tells Angela that they got the wrong guy. Angela doesn’t buy it – but Laura tells her to check in to the tattooed guy that he saw at the scene of the crime. Then she tells Laura to stop checking up on her since she is on vacation.

Laura heads home to work on her crafts and Billy pays her a visit. Laura thinks that since the fire was set right outside of Gloria’s apartment they should see if she had any enemies. Billy stops by the bar where Gloria works, and asks her if she has any crazy ex-boyfriends. She admits she dated a man named Cliff and he abused her, but he is in jail. Billy looks it up on his phone and realizes that Cliff was released from prison a week ago. Gloria reveals that right before she had him arrested he told her that he would kill her.

They bring Cliff in for questioning – he confesses he was there the night of the fire. But, he heard about it on the radio and ran over to make sure she was okay. Cliff insists that he is a changed man – and going to jail was the best thing that ever happened to him. He wants to pay Gloria back for everything that he did to her. He has an alibi – he was feeding 200 homeless people at a shelter when the fire started.

At her house Laura sets her cookies on fire, so she calls Tony and has him bake her 12 dozen snowmen cookies. He arrives on her doorstep with the cookies and a bottle of wine. Laura fills Tony in on the case that they are working at the police station – and shows him the news clip of Gil. He confesses to the reporter that this is the second time he saved a life, he pulled a man off the subway tracks moment before he was ran over.

Laura meets up with Billy for hot chocolate and Laura fills her in on Gil’s subway quarter. She thinks that Gil wanted to be in the spotlight again so he set the fire so he could be a hero again. But, he had no idea that Kevin park was in the basement.

Jake and Angela bring Gil in for questioning – Max interrupts the interrogation room and puts his phone under the table so that Laura can hear everything that they are saying. Gil says that he woke up in the middle of the night and heard Gloria screaming – so he ran up to the second floor and rescued Shawn and then ran out. Jake accuses Gil of calling 911 and then setting the fire himself. Angela accuses Gil of being “hooked on heroism.” Gil insists that he is innocent and he would never do such a thing and lawyers up. Jake and Angela think that they have solved the case and it is only a matter of time before Gil pleads guilty.

Laura watches the news clip again, and realizes that in the video Gil whispered something to the little boy he was rescuing before the ambulance and firefighters took him. Laura heads to the diner where Gloria is working and she has Shawn with her. Laura talks to her about how hard it is being a single mom – and then she reveals that she knows Shawn was home alone the night that the fire started. Gloria confesses that she wasn’t home, she was working and her babysitter ditched her. She came home from work and the building was on fire – and Gil lied to the police and said that she was there so DSS didn’t take him. Laura sits down with Shawn and talks to him about the fire, he admits that he started the fire in the garbage can outside of his door because he was so cold and the landlord had shut off the heat. So, the cas is solved. Angela, Jake, and the rest of the team head out for drinks – Billy arrive and tells them that they were wrong and Shawn actually set the fire. Laura heads to the winter carnival with all of her cookies and decorations and gloats to the other moms who thought she couldn’t pull it off.