The Mysteries of Laura Recap 11/5/14: Season 1 Episode 8 “The Mystery of the Mobile Murder” 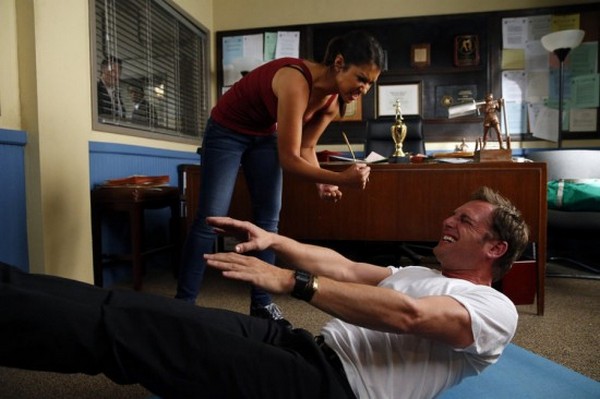 Tonight on NBC The Mysteries of Laura continues with an all new Wednesday November 5, season 1 episode 8 called, “The Mystery of the Mobile Murder.” On tonight’s episode a woman’s body is found on a party bus, and Laura [Debra Messing] and the team conduct a murder investigation leads to a beauty empire. Meanwhile, the detectives get competitive during an annual mud race.

On the last episode, the son of a prominent art gallery owner was found dead in Koreatown. Looking for clues, Laura (Debra Messing) and the team navigated through the neighborhood’s karaoke scene where they uncover a gambling ring. To catch the killer, Laura had to prepare to enter a high-stakes poker game, forcing her to reconnect with her estranged father (guest star Robert Klein). Did you watch the last episode? If you missed it, we have a full and detailed recap right here for you.

On tonight’s episode from the NBC synopsis, when a woman is found dead on a party bus, Laura and the team take on a beauty empire and its leader to uncover the truth behind the murder. Meantime, an annual mud race creates some friendly competition amongst the detectives of the 2nd precinct.

We will be blogging The Mysteries of Laura season 1 episode 8 with all the up-to-the-minute details at 10PM EST so make sure to come back to this spot and watch the show with us. Make sure to refresh often so you get the most current info! In the meantime, sound out in the comments and let us know what you think of the series.

Tonight’s episode of Mysteries of Laura begins with a man cleaning an empty party bus, he hears a noise in the bathroom and knocks on the door.  He opens it and the body of a dead woman falls out on the floor.

Laura heads to work, Jakes shows up with the boys and says that their babysitter went to a protest rally.  A call comes in for a murder on a party bus.  Jake tells Billy and Laura to go check it out and volunteers to watch the kids.  As Laura is leaving Agent Alejandro Parillo stops by and says that he just wanted to say “hi.”  Jake interrupts him and Laura and brags that they have kids together to defer Parillo’s flirting.

Laura and Billy head to the bus, and learn that it was rented out by Wallstreet guys “looking for a good time.”  The bus drives confesses that the Wallstreet guys went home around 12, and he picked up a group of hot girls he saw on the street.  The driver says he picked them up at a male strip club.

Laura and Billy check out the strip club, the waiter remembers their victim and says that she didn’t look like she was having a good time and ordered green drinks.  Laura finds a stripper with green eyes who calls himself Mr. Silver – she agrees to let him give her a lap dance.  When one of the busboys sees Laura asking about the victim he runs to the locker room and Billy chases him.

The busboy Lyle confesses that they stole the murdered woman’s purse, and he hands over her purse.  Unfortunately there’s no ID or cell phone, but they do find a pen from a local hotel.  Meanwhile, back at the office Jake is watching youtube videos of “Rock & Run,” an obstacle course that all the police departments compete in.  He has decided to do the obstacle course because he knows Alejandro is doing it.  Alejandro comes back to the precinct and tells Max that he wants to ask Laura out on a date.

Billy and Laura arrive at the hotel where a Garden & Glow convention is underway.  The sales reps are selling nature products that help them fight mother nature’s course of aging.  Margo Preston takes the stage and the legions of housewives cheer for her like they are at a rock concert.  Margo announces that the top seller of Garden & Grow will win a brand new car.  They notice a photo of their victim hanging on the wall as a top seller and learn that her name is Julie Campbell.

After the convention Billy and Laura track down Margo, but she doesn’t know Julie that well, she just joined their circle of top sellers.  She says that she has an alibi and was in her hotel room while Julie was killed.  They bring in one of the Garden & Glow sales women, she informs them that Julie was feuding with Danielle Bailey and they got in a huge fight and Danielle shoved her in front of everyone.

Jake decides to have Billy train him for the Rock and Run, after they work out they head to the breakroom and Billy feeds him protein shakes and boiled chicken and kale.  He also threw away his $300 bottle of scotch.

Laura pays Danielle Bailey a visit, she says that Julie disappeared when they went to the strip club and Danielle and the rest of her friends went back to the hotel and had a sleepover.  She does reveal that Julie was a cheater and she sold all of her products to her sugar daddy in New Jersey so that she could make a top seller.

They track down Julie’s invoices and learn that she had all of her sales sent to a storage locker.  Billy and Meredith head to the storage unit to check out the locker ad while they are there they stumble across an illegal cock-fighting game in one of the storage lockers.  After they bust the gamblers, they head in to Julie’s storage locker and find all of her products and the entire wall is covered in photos of Margo and diagrams.  The wall says “The Lies Behind Garden & Glow.”

They do some digging and learn that Julie was a journalist – but no news outlets have ever heard of her.  Billy pays her boyfriend Ethan a visit, he has an alibi and the night that Julie was murdered he was performing in her band.  Julie has been writing the story to try and sell to a website.  She despised Margo because she convinced Julie’s mom to take out a second mortgage on her house and max out all of her credit cards to buy Garden & Glow inventory – but she couldn’t move any of the product.  Ethan says that the night Julie died she called him and said that she was going to confront Margo about her Mom.

Alejandro shows up at the precinct again, but Jake informs him that Laura is out and tells him to “back off.”  Jake tells him that Laura is going to take him back and he is proving to her that he can change, and he doesn’t need any obstacles like Alejandro getting in the way.  Alejandro says that if Jake drops dead at the Rock and Run, he is going to take her on a date to his funeral.

Billy and Laura get room service receipts from Margo’s room and realize that Julie was in her room between 9:00 and midnight on the night that she was murdered.  They bring Margo in for questioning and she lawyers up and refuses to answer any questions.  She finally admits that Julie came to her room, but she has nothing to do with her murder.  Margo says that Julie was emotional and talking about her mom, Margo offered her $100,000 to keep quiet but Julie turned her down and left.  After Julie told her “no,” Margo took $200,000 cash out of her bank to pay off Julie.

Margo takes Laura and Billy up to her hotel room and shows them the cash in the safe and proof of what time she transferred the money.  Laura and Billy realize that the hotel room walls are paper thin and whoever was next door overheard their entire conversation.

Later Laura crashes the Garden Glow awards ceremony, she takes the stage and reveals that Margo is scamming them and is 43, not 59.  They arrest diehard sales woman Heidi, who was next door to Margo and would do anything for her – and GPS on her phone reveals that she was following the party bus the night that Julie was murdered.

It’s time for the Rock and Run competition, Jake, Billy, and Meredith are going through the extremely intense obstacle course.  Jake is slowing them down though and they have to keep doubling backwards and talking him through everything.  After practically carrying him across the finish line they learn that their precinct came in dead last.