The Mysteries of Laura Recap 3/25/15: Season 1 Episode 17 “The Mystery of the Intoxicated Intern” 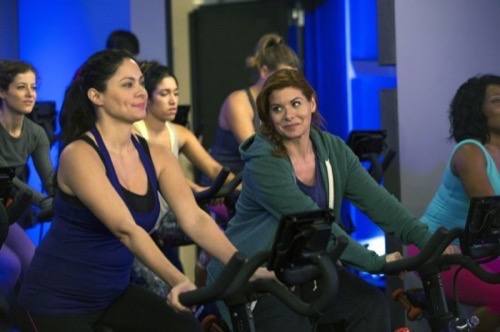 Tonight on NBC The Mysteries of Laura continues with an all new Wednesday March 25, season 1 episode 17 called, “The Mystery of the Intoxicated Intern” and we have your weekly recap below. On tonight’s episode, an intern at a tech start-up is killed, so the detectives investigate. Meanwhile, Laura [Debra Messing] has trouble scheduling alone time with the new man in her life.

On the last episode, Laura’s ex-fiancé became a murder suspect in a former beauty queen’s stabbing death. As Laura reminisces, the investigation lead the team into the world of holistic healing. Did you watch the last episode? If you missed it, we have a full and detailed recap right here for you.

On tonight’s episode as per the NBC synopsis, “the detectives probe the murder of an intern working at a trendy tech startup. Laura (Debra Messing) struggles to make time for intimacy with her new beau.”

We will be blogging The Mysteries of Laura season 1 episode 17 with all the up-to-the-minute details at 10PM EST so make sure to come back to this spot and watch the show with us. Make sure to refresh often so you get the most current info! In the meantime, sound out in the comments and let us know what you think of the series.

If it’s not Nanny Alicia snooping around then its work that’s been interrupting Laura’s love life. And, frankly, our detective is starting to get sick of it. You see she hadn’t seen Tony in weeks and just when they were about to finally get busy –worked called yet again. Apparently, a young college freshman had been drugged and dumped and so now the detectives were asked to look into the sorority she was pledging.

It seems the victim, Caroline, was pledging at a college all the way out in Long Island but for some reason, as part of their hazing process, the pledge master drove her all the way to Manhattan without any money or shoes and she was just supposed to make her own way back. Thankfully, though, one of her future sisters had actually given her a train ticket. So, later this same sister was willing to explain to the detectives why the hazing was so drastic for Caroline. And it looks like someone inside of the Greek house had a grudge against the victim.

It seems that before she had even pledge, Caroline was supposed to be a shoo-in. Her mother had belonged to the sorority and so Caroline was a legacy. But the legacy she had sadly inherited was what came back to bite her.

However she didn’t kill Caroline and it was Caroline’s time of death that cleared her. Because while she was drugged, the drug she was injected with took hours to kill her. Meaning whoever got to Caroline did so when she was at work.

Even though she was a freshman in college, Caroline was interning at big tech company in the city and according to pretty much every one the detectives talked to – there wasn’t anyone that didn’t like Caroline. She was pretty, she was popular, and she was smart. Yet did someone kill Caroline when they found her to be too popular?

And it made her married lover’s wife look guilty. The blog hinted the wife was onto the affair and when the woman was later questioned by the police – she admitted to knowing about it. And at first her husband’s affair with an intern hurt her. However they were able to overcome it after he signed a document nullifying their pre-nup. So things were back to being all good between them.

But then the wife said something really odd when she was shown some of the blog entries.

She said that if Caroline wrote that then she must have been lying because half of the encounters listed – the wife claims her husband was with her. So Laura and more importantly Max looked into this blog and though it was loosely based on Caroline’s life – whoever wrote it also took creative liberties.

Linda, Caroline’s friend, as it turns out was slightly jealous of Caroline’s life. So, while she was online, she pretended to be Caroline. Then when Caroline found out what she was doing – Linda began making up details seeing as her friend no longer wanted to talk to her.

Though, she didn’t kill Caroline either. She simply stole her life and added embellishments.

So if it wasn’t the wife, the jealous friend or the lover that was out of town then who else could it have been. Well, there was a third person that was jealous of Caroline’s relationship with her boss and it was the boss’s business partner. It seems he was frightened she was going to convince her boyfriend to make her partner. And, seeing as he was already listening to Caroline’s ideas; the partner killed her with his medication.

It was a pointless death and it brought along with it unnecessary paperwork. But, luckily, Laura found time to see Tony in the few hours she was free.