The Mysteries of Laura Recap 4/1/15: Season 1 Episode 18 “The Mystery of the Sunken Sailor” 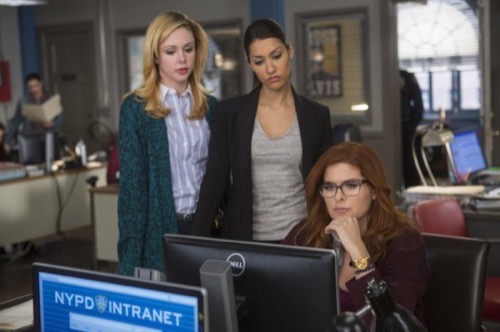 Tonight on NBC The Mysteries of Laura continues with an all new Wednesday April 1, season 1 episode 18 called, “The Mystery of the Sunken Sailor” and we have your weekly recap below. On tonight’s episode, Laura [Debra Messing] helps investigate a sailor’s murder, and she uses the case to avoid celebrating her birthday. Meanwhile, Billy [Laz Alonso] must team up with a hard-nosed naval investigator.

On the last episode, the detectives probed the murder of an intern working at a trendy tech startup. Laura (Debra Messing) struggled to make time for intimacy with her new beau. Did you watch the last episode? If you missed it, we have a full and detailed recap right here for you.

We will be blogging The Mysteries of Laura season 1 episode 18 with all the up-to-the-minute details at 10PM EST so make sure to come back to this spot and watch the show with us. Make sure to refresh often so you get the most current info! In the meantime, sound out in the comments and let us know what you think of the series.

Tonight’s episode of Mysteries of Laura kicks off with Laura at a liquor store – she has tracked a guy there that stole her wallet and has been using her credit card. She arrests him and buys a box of donuts and heads to work. At work Laura heads to the morgue where Billy and the coroner are going over their latest murder victim, Petty Office 2nd Class Greg Hansen. He was a tugboat captain in town for Fleet Week – the river contaminants made DNA testing difficult. But, they did find his badge and know he was operating the USS Sherwood.

Billy and Laura head to the Sherwood, and they find NCIS is already there – they inform Laura that they need approval from Captain Meeks before they work the homicide. Laura fakes getting seasick and tells Billy to distract the NCIS officer while she searches for Hansen’s cabin. She cuts the NCIS’s tape off the door and heads inside to investigate. She finds something in his dresser and stashes it in her purse before the guards charge in and drag her out.

The guards take Laura to meet with Captain Meeks – she shows him bloody rags that she found in Hansen’s room. Meeks is not happy, he says that Hansen’s murder is the Navy’s business. After Laura threatens to go to the mayor, Meeks agrees to let her talk to his sailors but warns her that they are shipping out in 72 hours.

Laura sends the bloody rags to the lab and learns that it is not even human blood – it is shark blood. She thinks that Hansen was smuggling shark’s fins apparently it is illegal and there is a huge market for it. Meeks called Jake and read him the riot act and informed him that the NCIS was still investigating Hansen’s murder as well.

Meredith heads to a local bar and begins asking all of the sailors there about Hansen. They learn that Hansen’s bunkmate is a sailor named Wilbur. He’s in China Town getting a supplement called Tiger Penis, it is supposed to be like Viagra and can “Make you go for hours.” Meredith gets the address to the place in China Town and thinks that it may be a place that sells shark fin.

Laura and Billy head to the supplement store in China Town, she says her husband “needs help in that area.” She says the Tiger’s Penis isn’t working and she wants some shark fin, then she flashes a $100 bill. The storeowner takes her to the back room where Wilbur is working on grinding up shark fin – when he sees Laura and Billy he tries to make a run for it. Billy chases him down the streets and through the alley and corners Wilbur. He pulls his gun on Wilbur, and then the NCIS agent that is working the case arrives and pulls her gun on both of them.

Billy heads back to the office with the NCIS agent Jennifer – she reveals that she already knew Wilbur was smuggling shark fins, and Hansen was helping gather intel on Wilbur. Billy thinks that Wilbur killed Hansen to keep him quiet. The NCIS agent is sure that Hansen’s cover wasn’t blown. They both head in to the interrogation room together to question Wilbur, he says that Hansen met a girl online and the night he was killed he was going to meet her face to face for the first time.

They pull up Hansen’s email and learn that his online girlfriend’s name was Nancy. The NCIS thinks that the online girl is a waste of time – Laura sits down to read through Nancy’s poems that she sent to Hansen. She found out that she loves elm trees and a Ukranian diner. They find the only Ukranian diner next to Elm trees in New York and they head there. They find her apartment upstairs and run in to her neighbor Dwaye. He says that Nancy never leaves her apartment, she just sits on her computer and watches TV. Nancy comes to the door – and they realize that she was using a fake profile picture. Nancy tries to deny talking to Greg and slams the door in their faces – Meredith kicks in the door and chases Nancy, she is trying to erase her hard drive. Meredith stops her just in time.

At the police station they so some snooping on Nancy’s computer and phone and find out that she had three other boyfriends who were also sailors and in tow for Fleet Week. Meredith checks the sailors alibis and they are all free to go, there was no way they could have killed Hansen. After Laura tells the that they are free to go – they refuse to leave because they all insists they are in love with Nancy and they are waiting for her.

Meredith finds a new lead on Nancy’s computer, she had a boyfriend in prison too and named Zeke and he just got out of jail three weeks ago and was released to a halfway house. They have to cut Nancy loose because she has an alibi, Billy and NCIS agent Jennifer sit outside of Nancy’s house keeping surveillance. Meredith calls Billy and warns him that Zeke signed out of his halfway house and they think he is headed to Nancy’s. Laura calls Billy and tells him to stop looking for Zeke because he is dead – she tells him to bring Nancy back down to the station for questioning, now two of her online boyfriends are dead.

Meredith sits down in the interrogation room with Nancy and demands to know why two of her boyfriends are dead. Nancy insists that she is innocent – and she says that her relationships were real, but the reason she had so many of the was because you couldn’t rely on them and they would start ignoring her so she needed to move on to a new one. Nancy breaks down in tears and begins sobbing – she admits that she is on medication and sees a psychiatrist. It’s late so Jake says to hold Nancy over night and then they can check in with her psychiatrist in the morning.

In the morning Nancy’s psychiatrist comes in – she reassures them that Nancy isn’t violent. They ask to see the notes from Nancy’s sessions and the doctor reveals that a few weeks ago all of her notes were stolen. The Dr. says that Nancy has deep-seeded paranoia and she is convinced that someone is watching her.

Laura thinks that Nancy might really have a stalker and whoever stole the notebooks used them to find out who her boyfriends were. Laura thinks that Nancy’s neighbor Dwayne might be the one stalking her – they pull his record and realize that he has been arrested for stalking other women in the past. They rush over to Dwayne’s apartment and kick in the door – they find the notebooks from the psychiatrist’s office, so he is definitely their guy. They log in to his computer and learn that Dwayne has a spy camera set up in her apartment and has hacked in to her emails. They send Dwayne an email pretending to be Nancy and ask him to meet at a bar to chat.

Laura asked Dwayne to meet them at Pelicans, which is actually a cop bar. Dwayne arrives at the bar and Laura is standing behind the bar posing as the bar tender. Laura tells Dwayne that he just missed Nancy, he rants that he is the man for Nancy. Laura says that she thinks Nancy went to see Zeke. Dwayne laughs that it is impossible for Nancy to see Zeke because someone shot him between the eyes – that’s all they need for a confession. They cuff Dwayne and lead him away for the arrest of Zeke and Hansen.