The Mysteries of Laura Recap 5/13/15: Season 1 Episode 21 “The Mystery of the Deceased Documentarian” 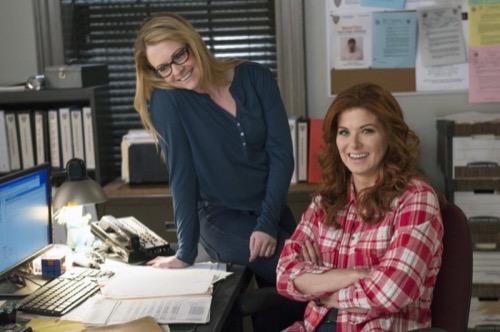 Tonight on NBC The Mysteries of Laura continues with an all new Wednesday May 13, season 1 episode 21 called, “The Mystery of the Deceased Documentarian” and we have your weekly recap below. On tonight’s episode a young filmmaker is murdered, and an inexperienced detective causes problems with the investigation as Laura’s [Debra Messing] team search for the killer.

On the last episode, when a murdered club kid was tied to a string of Diamond District jewel heists, Laura (Debra Messing) and the team have to stop a robbery crew to solve a murder. Meanwhile, Jake’s (Josh Lucas) violation of divorced-parent etiquette forces Laura to re-evaluated the seriousness of her relationship with Tony (Neal Bledsoe). Laz Alonso, Janina Gavankar, Max Jenkins and Meg Steedle also star. Janel Parrish (“Pretty Little Liars”) guest stars. Frankie Muniz (“Malcom in the Middle”) cameos as himself. Did you watch the last episode? If you missed it, we have a full and detailed recap right here for you.

We will be blogging The Mysteries of Laura season 1 episode 21 with all the up-to-the-minute details at 10PM EST so make sure to come back to this spot and watch the show with us. Make sure to refresh often so you get the most current info! In the meantime, sound out in the comments and let us know what you think of the series.

Thomas was a Gofer. Apparently apps like Uber weren’t enough. Nowadays when people have odd jobs just lying around they use the app Gofer. And people like Thomas, who were in desperate need of the money, subjected themselves to doing the weirdest and mostly illegal jobs.

In fact right before he was murdered, Thomas was doing a pickup service for drug addicted EMT worker. So as you can see this job of his introduced him to the darker side of New York. And because it’s mandatory that Gofers were tracker devices – indicating their exact movement at all times – Thomas’s killer probably used this very same job to kill him.

Yet there was a reason Thomas needed the money and was willing to do pretty much anything to get it. And oddly it had to do with a fifteen year old cold case.

Raquel was a high school student when she was murdered not long after a school dance. Also she was pretty and popular so naturally her murder sent shockwaves throughout her community. And for some reason Thomas eventually became interested in this case.

Then he did something else. Which was probably more than he should. Thomas made it his life’s mission to find out what happened to Raquel seeing as the case was never closed. So he created a film dedicated entirely to his investigation.

And he was murdered on the day of premiere.

Laura knew she had to see the movie and when she went with Jake they both saw for themselves that Thomas had named the killer as Raquel’s brother Oliver. However Oliver never showed up for the viewing. He was invited but had seemingly dropped off the grid in the last couple of days.

So Jake had to come to a decision. Because even though the cases are obviously tied up – he didn’t necessarily want to put a cold case on the books. He just wasted his detectives to focus on Thomas and not what happened to Raquel.

But Laura being Laura, she went behind his back and connected the cases anyways. And in the midst of this investigation into both murders – there was also a pesky journalist poking around and KC Moss was simply everywhere. She popped up at Oliver’s home and she was even there at the premiere.

Thus it was odd that she never mentioned that she went to school with the victim and the chief suspect.

KC who was once known as Katherine Claire back in high school had left a considerably piece of her past out when she had been interviewed by the police. And, honestly, that didn’t look good when her finger prints were the ones found at the place Oliver had been murdered. Oliver, Raquel’s brother, had been set up to look like a suicide but whoever killed him also revealed that they were the ones that killed Raquel.

The earrings Raquel had been wearing on the night she died were found in the dead Oliver’s pockets. So instead of investigating two murders, and that was pushing it by Jake’s standards, the detectives was looking for a person that has already killed three people.

And though Thomas had named Oliver as the murder in his film, Laura found out that someone had edited the film prior to its release.

Someone had broken into Thomas’s apartment and stolen his laptop. Yet when the movie went ahead they figured that laptop had been stolen for something else. That is until they realized the film had been edited.

Anyways, KC had an explanation. She said that Raquel had been a secret friend of hers at school. Apparently the other girl had protected her from bullies. So that’s why KC has followed the case. Even going as far to ruin evidence when she couldn’t stop sneaking around.

Before he had been rejected by them, Thomas had tried to get the film into the Tribeca Film Festival so luckily they still had the original on film. And after watching it Laura realized it was Raquel’s high school boyfriend Ethan that killed her. Then he proceeded to kill everyone that had found out about what he did.

Ethan had kept his girlfriend’s earrings and Thomas had caught his wife wearing them while he was filming the movie.

So that’s how it all came out and unfortunately KC was interviewing Ethan at her home when the cops began looking for him. It seems they had tried to warn KC to get away but the young sleuth couldn’t resist. She confronted Ethan on air and Billy had to show up and save her.

The guys pulled her in time but its doubtable she learned a lesson from all of that.

And later when Jake had gone out for some drinks, he found himself in the middle of hold-up and tried to be hero. But unlike Billy and Frankie, he got himself shot in trying to do so.