The Mysteries of Laura Recap 5/6/15: Season 1 Episode 20 “The Mystery of the Crooked Clubber” 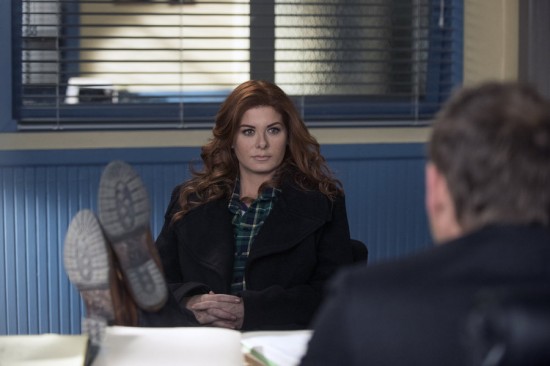 Tonight on NBC The Mysteries of Laura continues with an all new Wednesday May 6, season 1 episode 20 called, “The Mystery of the Crooked Clubber” and we have your weekly recap below. On tonight’s episode a club patron’s death is linked to jewelry heists, so the detectives must halt a thievery ring in order to solve a murder. Meanwhile, Jake breaks divorced-parent protocols, leading Laura [Debra Messing] to reexamine her involvement with Tony.

On the last episode, Laura (Debra Messing) dealt with an epic personal crisis while searching for the killer of a teacher’s aide. The investigation lead the cops into the madness of NCAA basketball. Josh Lucas, Laz Alonso, Janina Gavankar, Max Jenkins and Meg Steedle also star. Kenny “The Jet” Smith guest stars as himself. Did you watch the last episode? If you missed it, we have a full and detailed recap right here for you.

On tonight’s episode as per the NBC synopsis, “When a murdered club kid is tied to a string of Diamond District jewel heists, Laura (Debra Messing) and the team have to stop a robbery crew to solve a murder. Meanwhile, Jake’s (Josh Lucas) violation of divorced-parent etiquette forces Laura to reevaluate the seriousness of her relationship with Tony (Neal Bledsoe). Laz Alonso, Janina Gavankar, Max Jenkins and Meg Steedle also star. Janel Parrish (“Pretty Little Liars”) guest stars. Frankie Muniz (“Malcom in the Middle”) cameos as himself.”

We will be blogging The Mysteries of Laura season 1 episode 20 with all the up-to-the-minute details at 10PM EST so make sure to come back to this spot and watch the show with us. Make sure to refresh often so you get the most current info! In the meantime, sound out in the comments and let us know what you think of the series.

Zach Shaw was thrown over an overpass. See, his killers most likely tried to pass off his murder as suicide but it was kind of hard to do that when they were scuff marks on Zach’s shoes. As if he had been dragged instead of voluntarily walking to the edge of a bridge.

Hence on tonight’s all new episode of “The Mysteries of Laura” the NYPD are searching for Zach’s killer and unfortunately for some they have to start their investigation by going undercover in the whole club scene. And Billy hates clubs. He thinks the music is too much and the body paint is just gets everywhere.

And so Jake told Laura to bring Frankie. The new girl was itching to get her feet wet and plus she actually appeared excited about going to a club. However that quickly faded when someone drugged her while she was undercover.

Laura ended up catching the culprit and lucky for them their drug dealer also had ties to their victim.

He was bartender that sold drugs on the side. And apparently Zach was his middle man. Zach’s brother Brian, who practically raised him by the way, described his brother as Gatsby sort of guy. The brothers were born in Queens but Zach wanted more. He desired a life among the rich and famous and by selling drugs he got closer to that dream.

Yet something wasn’t adding up. The bartender was cleared of Zach’s death and he gave the detectives insight into who Zach really was. Because Zach didn’t just sell. He was always using and no one likes a middle man that uses the product.

In the case, though, Zach soon cleared up his debt. As in he was making money on an entirely different front and so he wasn’t worried about losing his job in the drug business. And whatever this business was – went towards paying for his new expensive watch.

Max described the piece as extremely extravagant. And yet later, Zach’s girl otherwise known as the one he would get high with said she thought his watch was a good fake. So naturally Laura had to call the trust fund kid out on her lie.

They had proof she did drugs so Laura threatened her with prison in order to get her to talk. And it seems like Zach was so desperate to fit in that he might have been involved in a string of robberies in the diamond dictrict.

Before he began living the high life, Zach worked in security. Specifically in the diamond district. So he’s the best suspect the detectives had in the robberies and all that was left was finding out who he was working with.

And on personal note, Laura is once again angry at her ex-husband. It seems she took issue with Jake when he introduced their sons to his new girlfriend. Apparently she didn’t think they needed to meet someone that was the flavor of the month.

However Angela is much more than that. Jake told Laura that he was serious about Angela and also he was curious about why she would be offended. After all she has Tony and the fact she hasn’t introduced her boyfriend to her kids says a lot about her relationship.

And Tony agreed with Jake. About Angela that is. He told Laura to cut Jake some slack. That all boys want to show off their latest toys.

So that gave Laura an idea about how they could find the rest of the jewel thieves. There was a priceless getaway car that was caught on security camera prior to every robbery. It was black Ferrari and it was just a thing a rich kid would most likely buy.

Though instead of buying they found rich kids renting it for drag racing. Thus the detectives had to play a waiting game. See, they had found out where the next robbery was going to be so all they had to do was stake out the place.

They knew what they were looking for and so they were going to bust the jewel thieves in the act. But that plan was skewed when a civilian got in the way. And Laura, being Laura, chose to drive her surveillance into the jewelry store in order to frighten the thieves.

The plan worked and the detectives found out that Zach’s girlfriend was in on the robberies. Gillian was a rich kid looking for a thrill. Yet neither she nor her friend killed Zach.

Thanks to Frankie of all people, Laura figured it was Zach’s brother Brian that had killed him.

Frankie got her hands on one of the culprits’ phone and to do that she had to step on Jake’s plan to get a confession. So while she helped – she knew she had also upset her boss. And that Laura saved her from getting into real trouble.

Laura saw a picture of Zach on the night he was murdered and in it he was wearing eye-liner. Though when his body was found – someone had wiped it off. As if it disgusted them that he was wearing it. And that could have only have been his brother.

The same brother that despaired of Zach getting involved with the partying scene. So Laura knew who killed Zach and a quick search of Brian’s car showed that Zach’s body had been in there.

Thus Laura closed the case but she didn’t like particular like this one. And later when she went home – she cheered herself up by having Tony over at the house.