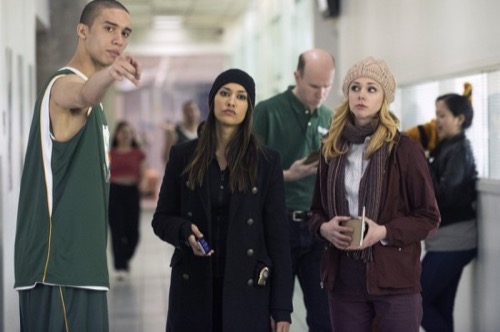 Tonight on NBC The Mysteries of Laura continues with an all new Wednesday April 22, season 1 episode 19 called, “The Mystery of the Dodgy Draft” and we have your weekly recap below. On tonight’s episode, the team go inside the world of NCAA basketball while investigating the murder of a teacher’s aide, and Laura [Debra Messing] must balance this case with a huge personal crisis.

On the last episode, Laura (Debra Messing) dodged her birthday while probing the murder of a sailor. Billy (Laz Alonso) was forced to work alongside a headstrong naval investigator. Kathie Lee Gifford guest stars as Dr. Carlin, a psychiatrist that assists with the case. Meta Golding (Hunger Games) also guest stars. Laz Alonso, Janina Gavnkar, Max Jenkins and Meg Steedle star. Did you watch the last episode? If you missed it, we have a full and detailed recap right here for you.

On tonight’s episode as per the NBC synopsis, “Laura (Debra Messing) deals with an epic personal crisis while searching for the killer of a teacher’s aide. The investigation leads the cops into the madness of NCAA basketball. Josh Lucas, Laz Alonso, Janina Gavankar, Max Jenkins and Meg Steedle also star. Kenny “The Jet” Smith guest stars as himself.”

We will be blogging The Mysteries of Laura season 1 episode 19 with all the up-to-the-minute details at 10PM EST so make sure to come back to this spot and watch the show with us. Make sure to refresh often so you get the most current info! In the meantime, sound out in the comments and let us know what you think of the series.

A body was found at the Botanical Gardens and if it were not for the taser marks found on the back of the victim’s next then this case could have easily been ruled an accident. However those marks were found and now Laura and her team are dealing with homicide. A homicide, by the way, that gets uglier by the minute.

The victim was formally known as Ms. Forster and she was a teacher’s assistant. In fact, right before she died, she was overseeing her group of second-graders. So the very beginning everyone knew they had to handle this particular case with white gloves. Especially when questioning their potential witnesses that were so young. Yet, the case took a shift when someone mentioned during the investigation that Forester had to be quickly “moved” from the last class she was overseeing and no surprises there that the conversation in turn lead to the detectives questioning their victim’s very own innocence.

See, Forester was once helping out with a bunch of eighth graders when suddenly a rumor cropped up about her and another teacher assistant sleeping with one. And while everyone should be given the benefit of the doubt – Forester quick move to a younger group was just a tad too sudden. So before the case could go anywhere else they needed the answer to whether or not their victim was in reality a pedophile? And as it turns out, no. Though someone went through a lot of trouble make her look that way.

The woman she was accused with said it was only a rumor. After all she, for one, has a reputation as a party girl and some people may have held her personal choices against her and the only friend she had on the faculty. But their original line of questioning was a bust, Alexis did provide the detectives with a new name to consider.

And that was Marco otherwise known as her late friend’s ex.

Marco is currently a champion basketball player in college and so when Frankie and Meredith showed up to question him – the guy with everything to lose chose to make a run for it rather than stick around. And what did he get for his troubles? He knocked down by Laura wielding a mascot suit. And ended up having to answer questions anyway.

Although, he claims he’s innocent. Marco admits to going to the Botanical Gardens and he says that he went there with the intent to see his ex. But that was because they were still friends you see. And apparently he wanted to speak to his best friend on that exact day.

The story is weak yet for some reason Laura’s gut is telling her Marco didn’t do this. Afterwards, she dug deeper into the case and was later willing to sit back and wait from results from tech. And patience paid off this time when the taser that was used on their victim was traced back to another college basketball player. Only the Russian was on an imposing team and was about to play against Marco’s in the upcoming round of championships.

Yet here’s when the story gets strange. The Russian didn’t have the murder weapon for long. His coach ended up confiscating it from him and hasn’t returned it since. And the reason the coach hasn’t returned is because he was rubbed. By Marco’s new girlfriend’s mother.

Amazingly, the stun-gun landed in Dawn’s hands after the opposing team’s coach tried to persuade Dawn’s daughter Sarah into convincing Marco to switching teams. Apparently there are rules about approaching Marco directly so the coach was going to play on the young man’s heartstrings. Only Dawn decided to take advantage of the situation to steal a stun-gun she saw lying on the table.

See, she heard that Marco was talking to his ex-girlfriend and that frightened her because she wanted her daughter to grow up to be the trophy wife she never got the chance to be.

That’s why she talked her daughter of talking a science scholarship. Getting a boob job. And even becoming a cheerleader.

It was all done just so Sarah could one day be a trophy wife! And when that dream (her dream) was threatened – Dawn took action and later her own daughter ratted her out. For it seems Sarah wasn’t a bad person. She simply had lacked a backbone until then.

So the dream was over and thankfully Sarah got away from her over controlling mother.

And, as for last episode’s cliffhanger, that’s been cleared up as well. Laura is not pregnant and as an added bonus, while she thought she was pregnant; not once did Laura think about her boyfriend. All she did think about, though, was Jake!