The Mysteries of Laura Recap 5/20/15: Season 1 Finale “The Mystery of the Corner Store Crossfire” 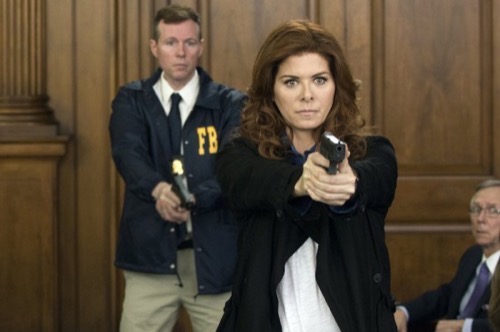 Tonight on NBC The Mysteries of Laura continues with an all new Wednesday May 20, season 1 finale called, “The Mystery of the Corner Store Crossfire” and we have your weekly recap below. On tonight’s episode in the first-season finale, Jake remains in critical condition and his team search for his shooter, a gunman who possess a high-tech weapon.

On the last episode, Laura (Debra Messing) and the team clashed with a meddlesome amateur detective while tracking down a young filmmaker’s killer. Melissa Joan Hart guest stars as an online radio host named KC Moss. Josh Lucas, Laz Alonso, Janina Gavankar, Max Jenkins and Meg Steedle also star. Steve Guttenberg cameos as himself. Did you watch the last episode? If you missed it, we have a full and detailed recap right here for you.

On tonight’s episode as per the NBC synopsis, “as Jake (Josh Lucas) lies in critical condition, Laura (Debra Messing) and the team hunt his shooter, an assailant armed with a high-tech new weapon.”

We will be blogging The Mysteries of Laura season 1 finale with all the up-to-the-minute details at 10PM EST so make sure to come back to this spot and watch the show with us. Make sure to refresh often so you get the most current info! In the meantime, sound out in the comments and let us know what you think of the series.

Jake was shot during a random robbery. Earlier he had went into the store and was simply picking up somethings for himself when a man came in and told the store clerk to clear out the cash register. And truthfully Jake could have ignored it. But he is who he is and he was never going to stop being a cop.

Thus he wanted to be hero and initially he had the drop on the guy but, out of nowhere, everything changed when the thief pointed their gun at pedestrian that walked in on the crime.

Jake chose to protect the third party over himself and he got a bullet in return for it. In fact he was bleeding out really bad when he was finally removed the scene. And later when his squad showed up to investigate the scene – not many could look at the bloodstained floor and pretend this was any other case.

Laura actually got choked up and so Frankie, being ever helpful, convinced her to go their captain and let the rest of them handle the ground work. Though the investigation ended up hitting a wall. They eventually found the guy that was responsible for most of the recent robberies in that neighborhood but he claimed he didn’t hit that last store.

And what do you know – just when they realized they have to ask the store clerk from that night to go over some details with them – he’s done a runner.

Joseph was running the store that night because his grandparents asked him to. It seems he’s been living with them so he’s gotten an up close view about how bad things have gotten. You know money wise. And apparently he was helping them by taking on shifts.

But his grandparents are heavy in debt. Truly there’s no way they can dig themselves out of that particular whole. Everything they have has to go directly to the bank and because of that there wasn’t any money leftover – there was no way they could afford to send Joseph to college.

Joseph though is a genius. His grandmother said he was always the smart and dutiful one. So much so that he didn’t even have a girlfriend seeing as he didn’t have time for himself.

However Grandma was wrong about that last. Because the ten thousand dollars they found in Joseph’s room was hidden in a woman’s clothing store bag. And unless he was creative with his own fashion sense then that bag had to belong to his girlfriend.

And she just so happens to be the same girl that Jake saved from getting shot.

Joseph’s girlfriend had pretended to be an average Joe that was in the wrong place at the wrong time but it seems she knows more than the police about what really happened the night Jake was shot. Hence they made her look at what happened to Jake. And then demanded she begin talking.

Joseph had unfortunately did something that had never been done before – he created a fully functional 3D printer gun. And then he bragged about it. Literally to everyone until word had spread and someone wanted to make an offer for it.

And at first, the money was so bad. He was going to get ten grand before and after. Yet he must have grown a conscious because suddenly he didn’t want to hand over an undetectable gun to just anyone.

So these people he had gotten into bed with had then sent one of their guys to go threaten Joseph and that’s what Jake and Joseph’s girlfriend had walked it on. It wasn’t a holdup, it was a shake down. And now Jake is in a chemical induced coma because of it.

With the girlfriend’s help, they did find Joseph hiding out in a hotel room but by then he had already handed over a gun.

Originally he had the deadline of 9 am yet they had frightened him so bad that he couldn’t wait to give them what they wanted. However Joseph didn’t know who “they” were. All he had to give the police was the drop off location.

And that turned out to have led them to Jake’s shooter.

Joseph had gotten involved with a biker gang and these people wanted the printer gun so badly because they knew they could then resell it for an even higher price. So once they found Jake’s killer the detectives then had to find a buyer.

See, the printer gun could go through any scanner undetectable and people would only want something like that in order to use it in restricted areas. Like say a courtroom. And a woman whose daughter was murdered would definitely would want to use that gun on the murderer.

But Laura ultimately pulled herself away from a recovering Jake and she figured out who had bought the gun.

So a potential crime was stopped yet things still weren’t going to be ok right away. Jake was alert but he was having problems with his memory. And Laura, while worried, was also wondering if there could be a second chance for them. Thus those two had a long road ahead.

And in the meantime office romances were going to complicate things.

Meredith finally revealed her feelings to Billy and Laura found herself in a love triangle. So I for one will be back for season two just so I can see how this unravels.