The Mysteries of Laura Recap 9/30/15: Season 2 Episode 2 “The Mystery of the Cure to Loneliness” 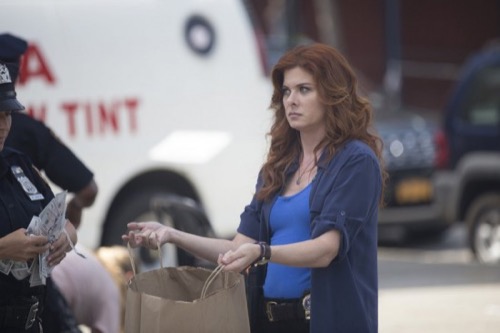 Tonight on NBC The Mysteries of Laura continues with an all new Wednesday September 30, season 2 episode 2 called, “The Mystery of the Cure to Loneliness” and we have your weekly recap below. On tonight’s episode a cancer patient dies under puzzling circumstances.

On the last episode, when a boy was kidnapped from his TriBeCa family, Laura (Debra Messing) and team were thrust into a high-stakes race against time and had to uncover a host of family secrets in order to save the boy. Did you watch the last episode? If you missed it, we have a full and detailed recap right here for you.

On tonight’s episode as per the NBC synopsis,“a cancer patient dies under puzzling circumstances, so the police investigate her death and unearth some surprises as they delve into the world of cancer survivors and supporters.”

We will be blogging The Mysteries of Laura season 2 episode 2 with all the up-to-the-minute details at 10PM EST so make sure to come back to this spot and watch the show with us. Make sure to refresh often so you get the most current info! In the meantime, sound out in the comments and let us know what you think of the series.

Nina Dickerson’s body was found by two pre-teens in the early morning. Earlier, they had been using a spy cam attached to one of their ankles to spy on women in various sort of undress in their neighborhood when low and behold they came upon a body. And surprisingly that’s when they finally did the right thing – they called 911.

And that call interrupted some pretty wonderful afterglow. Last season it looked like Laura was rethinking her relationship with her ex, but despite calling her husband at the hospital, she’s apparently back with her boyfriend. Though she’s currently hiding their relationship from her twins.

Laura said her boys still needed time to recover from what nearly happened to their dad. So Tony has been trying to remain patient. But the whole sneaking around part is beginning to wear thin and it might not have been accident that Laura showed up a crime scene with a very telling hickey.

Jake proved to be fine with it when it saw it. And he told Laura that she deserved some happiness of her own after everything she seems to have done for him over the summer.

So if Jake’s not a problem then maybe the kids won’t be either. But in the meantime their case was turning out to be an actual thorn in their side. Their victim had died from an apparent suicide and that’s what Jake was willing to write it off as – a suicide. However Laura felt something was off about the way Nina’s death was staged.

For someone that wants to kill themselves, Nina died woefully unprepared. She allegedly had an aggressive form of cancer and so she should have been thinking about her death for quite some time now. And probably wouldn’t have acted until she had all of her ducks in a row. Yet she hadn’t been in the dress she had told her neighbor that she wanted to be buried in. And instead she was wearing a summer flirty dress. Like she waiting for someone.

And, sure, that wasn’t enough for certain people like Captain Santiani who by the way was keeping close track of her division closing record. But Laura was resilient. And she kept on digging even no one else wanted her to.

So eventually Laura found even more inconsistencies. Nina had a blog about having cancer and she had the appearance of a long suffering cancer victim. Yet, following up on a hunch, Laura proved that her victim did not have cancer. Nina was simply faking it in order to gain friends.

And that’s just sad. Though, before she began faking cancer, Nina didn’t have anyone. She had no friends or family and even her helpful neighbor didn’t pay attention to her until after she was “diagnosed”.

Thus there was plenty of people that had a reason to kill Nina. And her case was officially deemed a homicide. While Nina may lied to everyone for months, she was also close to ending her con on the day she was murdered.

The tech squad found a document that was lying in wait to publish. In it, Nina created a convincing tale about her white cells suddenly going up. So it does look like she wanted to go back to being healthy. But by using the remission story, she also wouldn’t have lost so many of her new found friends.

One really great friend being April. April is a woman that actually is suffering from cancer and after meeting up with Nina, they decided to start a foundation that would help benefit the children’s cancer ward. However Nina was the only one that handled the money and someone had been sneaking a couple of hundred every once in a while so that the accounted had never gotten flagged.

ATM video showed a junkie but Billy and Meredith knew he was only a patsy. So they still had a case after their first suspect died in unfortunate accident. All they had to do afterwards was to trace their junkie’s last steps.

And it that showed that both the junkie and Nina had come into contact with Ted Burns. Ted was the man that delivered food to both their houses. He works for an organization that supposedly there to help the sick and the elderly. So Nina was receiving cooked meals and the man that stole from her just happened to be living with his sick grandma.

But what really pointed Ted out as a person of interest is that he had stopped showing up for a work in the last few days.

And a look into his accounts ended up telling him why he would run even before anyone had pointed a finger at him. It seems Ted was running more than one con. Evidence had been found at his apartment that proved he had been helping Nina fake her cancer. So he was in on that but another con was the way he talked some of his “patrons” into writing him into their wills.

Most of the people he saw on a daily basis weren’t always in the best condition. So Ted found it easy to dupe them out of their money.

However Nina was different. She was into the con as long as it got her friends. Meaning she didn’t honestly care about getting money for herself. And in the end that’s why Ted killed her. If she wasn’t going to be useful then he saw no reason to keep her around.

And once he disposed of her, Ted was going to take his yacht to make a final run for it. But thankfully the police stopped him from boarding the boat and set out in their cars to chase him down.

Though, funny story, Ted ended up crashing his car and all of his money was left to blow out of the window. So innocent pedestrians then saw what was happening and immediately tried to take advantage of Ted’s problem.

So Ted was victim of his type of people. Although none of them got to keep the money. Laura stayed behind to confiscate it all and she later returned the money to April who eventually put it back into the foundation.