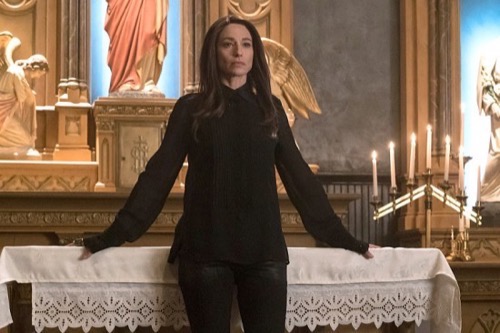 Tonight on the CW their drama, The Originals continues with an all new Monday April 13, season 2 episode 18 called “Night Has a Thousand Eyes,” and we have your weekly recap below. On tonight’s episode, Klaus [Joseph Morgan] comes face-to-face with a deadly threat when he tries to vanquish Dahlia. [Claudia Black]

On the last episode, Eva Sinclair’s reemergence left Rebekah trapped, so Klaus put aside his mistrust for Freya to save Rebekah’s life. Meanwhile, Hayley and Elijah learned more about Eva’s violent past; and Marcel turned to Vincent for help to take down Eva, but his plan took an unexpected turn. Did you watch the last episode? If you missed it, we have a full and detailed recap right here for you.

On tonight’s episode as per the CW synopsis, “Klaus comes face-to-face with a deadly threat when he tries to vanquish Dahlia. Meanwhile, Elijah and Marcel prepare a safe house in Algiers with help from Josephine; Jackson approaches Hayley with a risky idea; and Aiden becomes torn between his loyalty to Jackson and his secret alliance with Klaus.”

We hope you stop by for this cool show! Klaus, Rebekah, and Elijah have been some of our most favorite villains on TV, and we’re excited to see how this season further explore their complexities and character quirks.

#TheOriginals begins with Hayley and Jackson out for a walk with baby Hope in the Quarter. A violin player gets their notice and Hayley begins to notice suspicious things happening around them. A man approaches with a bouquet of black dahlias for the baby. Klaus is there and says to show himself. Dahlia takes over Jackson’s body and speaks saying she’s there and will take what is hers.

Klaus rants to Hayley about taking the baby outside of the fortress. Elijah tells him to calm down and says the need a new strategy. Freya tells them the spell Dahlia uses is called kenning and lets her see through the eyes of others. She has a tonic prepared that will prevent Dahlia from using any of them as a conduit. Klaus says their minds are too strong to fall prey to kenning spells and refuses the tea.

Elijah says they need a new stronghold that Dahlia knows nothing about. Freya suggests she can use Jackson to trace Dahlia since she possessed him. Hayley agrees. Klaus says he’s going to find a way to murder that witch. Davina is at a crypt paying respect to Kol when Klaus finds her. He says he needs help with Mikael and wants her to find him. She says she’s busy mourning another dead boyfriend.

Klaus says they all grieve Kol and says he can help her raise him once they have the spell ready. He says he may give her Kol’s remains in exchange for her assistance. She agrees to swap Mikael’s location for the ashes. Aiden and Josh lie in bed cuddling and talking about their lazy plans for the day. Aiden gets a call and tells him it’s from Jackson, but it’s Klaus. He tells him Jackson is compromised by the witch and tells him he needs to guard Hope.

Hayley asks Jackson if he’s okay and he’s worried about what the witch could have done to him. She gives him some of the kenning-blocking potion. He says Dahlia is all darkness. He wants to run off with the pack and Hope to the bayou to stay safe. He says this fight is a 1,000 years old and is not their war or Hope’s. Klaus meets Davina and then Mikael shows up as requested. Mikael calls him the bastard and asks if he’s there for another beating.

Klaus offers him to join forces against Dahlia and go on a witch hunt. Elijah and Marcel meet with Josephine LaRue. They ask her to work a spell to help create a sanctuary to protect Hope. At first she refuses then offers a blessing and disruption spell and says she has sympathy for their plight. Klaus and Mikael sit in a cafe and his father complains how much he hates NOLA. Klaus asks if he got the items to destroy Dahlia. Mikael says three items make up her weakness.

Mikael calls him weak and says he’s only grown weaker. Klaus mocks him and says to focus on their common enemy. Klaus says if they win, both their daughters will be free – Freya and Hope. Freya spells while Rebekah channels to trace the magic in Jackson back to Dahlia. Rebekah yanks her hands away and says that Dahlia is channeling Freya but she says she had no idea and says Dahlia must have found her. She says Dahlia wants to break their ties.

Rebekah says she wants to trust her but says she’s bonded to Dahlia so she has to go. Mikael and Klaus engage in a pissing match about who’s stronger and more inspiring of fear. A woman outside the bar channels Dahlia and cracks the glass blowing it in at them. They agree to make the weapon and go hunt her. Freya is in the Quarter and notices stares of a crowd as Dahlia overtakes them all. Then Dahlia is there and frightens her.

Dahlia dismisses the crowd and says it’s convenient to find her mere steps from the baby owed to her. She asks how the rest of the family greeted her then calls her selfish and ungrateful. She punishes her with magic and Freya collapses in pain. She tells her that Mikael and Klaus will soon learn the lesson of defying her. Elijah is annoyed that Rebekah and Hayley sent Freya off. He tells her about the jazz club that’s being fortified as a sanctuary against magic. He says they move tonight at 9.

Davina is surprised to see Mikael and Klaus working together. Mikael shows her soil from Dahlia’s homeland, Viking ash and blood of her adopted child Freya. Klaus tells her to bind the ingredients to a weapon and Mikael offers a knife. Klaus says he will keep his bargain with her if she helps them and swears on Hope’s life. Davina agrees.

Freya comes back to the compound and Elijah and Rebekah welcome her. She says she saw Dahlia and says she’s making her move on Mikael and Klaus tonight. She begs Elijah to help her save them and says she’ll lure them into a trap, a site steeped in death like the site of a massacre, a previous patch of sacred ground. Mikael and Klaus head to a church and call for Dahlia. She’s there and sees Mikael with knife in hand. She tells them they can begin.

She brings in a multitude of people and Mikael says – so be it. He asks if Klaus is ready. She has the enchanted people attack them. She says her acolytes are formidable and says gifted them with some of her power to level the playing field. Mikael and Klaus are getting their butts kicked. Aiden comes to see Jackson who says he needs to take Hayley and Hope out tonight. He asks him to get a car and meet them to get them away before Marcel comes.

Aiden agrees and Jackson says he needs him to lead the wolves while he’s away. Mikael and Klaus get back to their feet and start attacking with a bitey, bloody vengeance. Dahlia ratchets up her powers. Josh meets Aiden and asks what’s going on. Aiden fills him in and says he doesn’t know what to do and whether to choose Klaus or Jackson. Mikael and Klaus finish off her followers and Dahlia offers a slow clap saying it was quite a performance.

She throws magic at them directly and they both go down looking gray and deathly. Hayley asks Jackson if he’s sure running is the best plan and he says he does. She’s packed and ready to go. Klaus and Mikael crawl for her. Freya shows up and tells her to stop. Dahlia tells her that they only want to use her for her power. Dahlia chokes Freya and Klaus attacks her with the knife. Elijah is there too and offers Klaus his blood to heal him.

Klaus comes at her with the knife and she’s gone and the knife is missing from his hand. Marcel shows up to escort Hayley and Hope and finds them gone. Jackson and Hayley wait on Aiden who is still undecided. Marcel shows up and Hayley acts like they were waiting on him and she chastises him for being late. Dahlia reappears and destroys the knife. She says she is only there for what’s owed to her. She says to hand over the child and they can live.

Aiden tells Josh he lied and said he was stuck in traffic. He thinks Jackson bought it. Josh tells him that Klaus puts people into bad situations then says his life is better for Aiden being in it and says he would die for him. They recount the evening’s events to Rebekah and Freya says Dahlia is done with them for the night. Klaus says he doesn’t see this as a defeat. Mikael says they exposed their weapon. Rebekah is shocked that Klaus and Mikael are speaking.

Elijah asks what’s next and Freya says they rushed it and made only one weapon. Klaus puts the oak dagger at his father’s chest and tells Freya one bite of magic and he’ll finish him. Klaus is enraged and sad and asks Mikael why he always despised him. He says he doesn’t know, he just did. Klaus cries and then asks if those are his final words. Mikael tells Freya he’s sorry and starts to say he loves her when Klaus plunges the dagger into his chest. Freya screams and cries.

Mikael falls over dead and his body combusts. Klaus says a burning Viking corpse like that will provide all the ash they need. Josephine LaRue is in the Quarter listening to a violinist. It’s Dahlia. She asks if Josephine plays and she says not in some time and shows her mangled hands which Dahlia cures. Josephine knows immediately who she is. Dahlia says she must use Josephine to use her to send a message to her enemies.

She asks if she can play one last tune before Dahlia has her way with her. She hands over the violin and Josephine plays with passion. She then quiets her and slits the old witch’s throat. Her blood runs in the street.