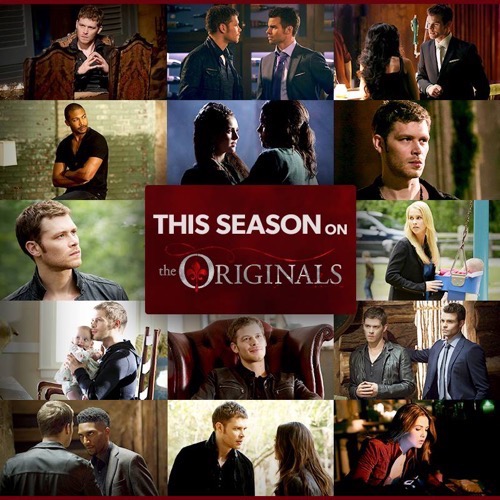 Tonight on the CW their drama, The Originals continues with an all new Monday April 6, season 2 episode 17 called “Exquisite Corpse,” and we have your weekly recap below. On tonight’s episode, Eva Sinclair’s reemergence leaves Rebekah [Claire Holt] trapped, so Klaus [Joseph Morgan] puts aside his mistrust for Freya to save Rebekah’s life.

On the last episode, suspicious of where her true loyalties lied, Klaus (Joseph Morgan) invited Freya (guest star Riley Voelkel) to the compound in order to gain more insight into her past with Dahlia. After a series of strange visions, Rebekah (guest star Maisie Richardson-Sellers) began to realize the body she’s inhabiting was attempting to regain control. With Rebekah’s life on the line, Marcel (Charles Michael Davis) put his bargaining skilled to the test when he turns to Vincent (Yusuf Gatewood), who may have had some knowledge that could help them. Lastly, at the bayou, Jackson’s (guest star Nathan Parsons) frustrations grew after Aiden (guest star Colin Woodell) questions his leadership skills. Did you watch the last episode? If you missed it, we have a full and detailed recap right here for you.

On tonight’s episode as per the CW synopsis, “Eva Sinclair’s reemergence leaves Rebekah trapped, so Klaus puts aside his mistrust for Freya to save Rebekah’s life. Meanwhile, Hayley and Elijah learn more about Eva’s violent past; and Marcel turns to Vincent for help to take down Eva, but his plan takes an unexpected turn.”

We hope you stop by for this cool show! Klaus, Rebekah, and Elijah have been some of our most favorite villains on TV, and we’re excited to see how this season further explore their complexities and character quirks.

Eva is back in control of her body on tonight’s all new episode of “The Originals”. Apparently whatever control Rebekah had over her host’s body has now officially worn off and so that means there’s only one solution left for Rebekah’s family. And unfortunately it’s a dangerous one.

In order is to get rid of a sociopathic murderess, who nearly targeted Hope as her next victim; Rebekah’s loved ones have to place her back into her original body. However there are several factors that are currently standing in the way of this. For instance they have to both find wherever Eva ran off to and also they have to convince the witches not to kill Eva before Rebekah can safely be extracted.

And so Elijah was sent to make a deal.

He tried to talk to Josephine. And by that he was willing to smooth talk her into giving him and his family a little more time. For that’s all they needed to find Eva. Yet, Josephine stood unchangeable. She had heard Elijah and simply chose to ignore them because, as she said, the witches deserved justice.

Eva took their children and drain them for their powers. So the witches wanted her dead and if that meant Rebekah had to die as well then in their book so be it.

And while Elijah’s mission was failing, Klaus tried to find a way to get Rebekah her body back. Sadly, though, that required an impromptu family reunion seeing as the one of the few people that knew which spell to use on Rebekah just happened to be his disgraced mother. And merely getting answers out of Esther was never going to be easy.

Klaus could compel her of course but, as it turns out, merely reintroducing her to Freya ended up doing the trick. You see something like that can actually soften Esther. And so the matriarch was willing to pass on her knowledge to her long-lost daughter.

Though she warned Klaus about Freya. She said the light she used to see in her daughter’s eyes weren’t there anymore. And she reminded him that Dahlia had been Freya’s mentor for a thousand years. Something might have rubbed off.

Vincent and Marcel were assigned to find Eva and though that’s exactly what they did – Vincent had to pretend to betray Marcel in order to get Eva to confide in him. And what he found out is that none of the kids she had taken are dead.

Eva just pull them all into a deep slumber as she continued to use their magic.

But the children are in fact fine. They’re link to Eva you see. And so whatever happens to her will then happen to them. Hence while she’s alive, they’ll be fine. And when she’s dead then they’ll die too.

So the spell Freya received was actually going to save more than Rebekah. Though, it was necessary for Freya to acquire an anchor for herself before she could complete the spell. You know something Freya could literally attach herself onto.

First she tried to use Klaus as her anchor but he didn’t quite trust Freya. Or her motives. He was afraid she would use the information she got out of him and give it to Dahlia. So Elijah offered himself up as her anchor because unlike, Klaus, he didn’t want to risk their sister in a power play

And funnily enough Klaus later joined in when it looked like both Freya and Elijah needed backup.

So in the end he too realized what was most important. And that was saving Rebekah. Earlier his mother had gotten into his head but despite the risks he just couldn’t walk away from his sister when she was in danger.

And Rebekah did survive her fight with Eva over supremacy. But she didn’t want her old body back aftewrads. It seems the spell didn’t remove the link between her and the other witches. So Rebekah didn’t want to risk their lives for hers.

Plus she wanted magic to bring Kol back.

Yet magic comes at a price and Esther proved to be right when she told Klaus not to trust Freya. Freya had looked into her brother’s head and she saw for herself that he would never trust her. So she’s decided to get rid of him and before she moved ahead with that plan – she did away their mother.

Esther knew too much!