The Originals Season 2 Spoilers: Klaus Gets Ambushed – Will This Vampire Finally Meet His Demise? (PHOTOS) 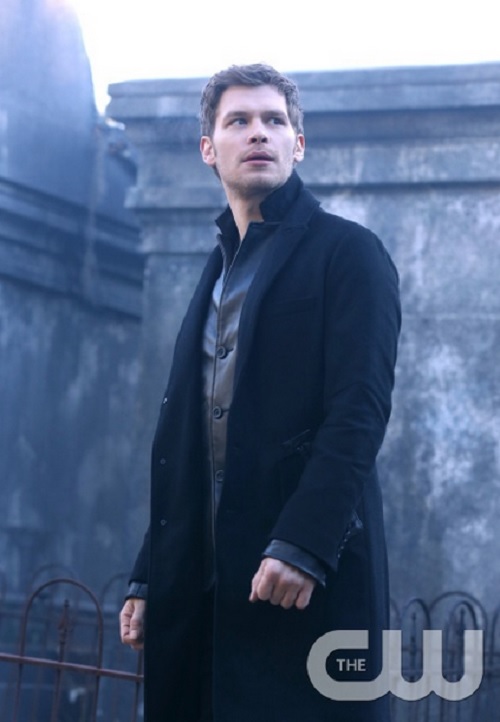 The Originals returns to the CW in a week, and the network has been offering up some spoilers and images from Season 2. The new episode, “They All Asked About You,” is all set to come out with a wave of publicity, but several pictures from the episode were released early to get the buzz going.

One image shows Klaus [Joseph Morgan] walking around a graveyard [oh, The Originals and its symbolism], and another shows a series of spikes getting pulled from his bleeding chest. The final image shows Klaus meeting werewolf Aiden [Colin Woodell] at a bar. Since Aiden has become Jackson’s right-hand man, it’s possible that Klaus is looking to take advantage of that connection and get Aiden to help him keep Jackson out of his life. Then again, maybe Aiden is meeting Klaus to send him a threatening message from Jackson… who really knows?

Right now, the scariest image from the set is that of Klaus bloody and bleeding, since getting spikes pulled from your chest is no fun – even when you’re an immortal vampire. Klaus has faced his fair share of death threats and dangerous situations in the past [especially on The Vampire Diaries], but it looks like this season is about to ramp things up in that regard.

So far, the ratings for The Originals have also been very steady [especially for a network like the CW], and I can’t imagine the show getting cancelled quite yet. So whatever the writers are planning, I imagine it’ll play out as a multi-season arc.

What do you guys think about the spoilers and images released from The Originals Season 2, Episode 15 ‘They All Asked About You’? Do you think Klaus will get himself into yet another dangerous and life-threatening situation, or are the images somehow misleading?

Image credits to The CW