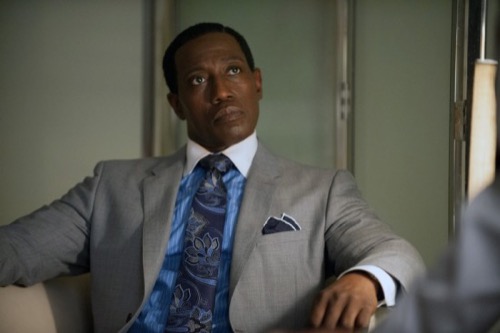 Tonight on NBC their new show, The Player with an all new Thursday October 1, season 1 episode 2 called, “Ante Up” and we have your weekly recap below. On tonight’s episode, Alex is ordered to stop a diamond heist, but he encounters an old colleague who is seeking information.

On the last episode, the series premiere introduced Alex Kane, a security expert who encountered an elite gambling organization called the House that was led by the mysterious Mr. Johnson. Kane joined the group, whose members place bets on whether he could prevent future crimes in hopes that they could assist him in catching his ex-wife’s murderer. Did you watch the last episode? If you missed it, we have a full and detailed recap right here for you.

On tonight’s episode as per the NBC’s synopsis, “Alex is ordered to stop a diamond heist, but he encounters an old colleague who is seeking information. Mr. Johnson and Cassandra step in and threaten to call off the bets. Later, Alex attends Ginny’s funeral and discovers details surrounding her murder.”

The Carnage Crew is what the media has been calling the group of men that has been robbing armed vehicles and leaving a high body count in their wake. And on tonight’s episode of “The Player” Kane was asked if he wanted to stop those guys before they struck again.

The organization that has “hired” him has also looked into the case and they have 7/3 odds that the Crew is about to hit somewhere in Vegas. See, they already knew that group was in town thanks to artificially intelligent computer ADA telling them all about where they’ve been spending their money. But the organization didn’t want to bring this information to the cops. They just wanted to use it as part of their sick game.

And that is what Kane calls it. He doesn’t understand how anyone could sit on their hands and do nothing meanwhile the Crew has been mass murders. So at first he was going to let his disgust for what’s going on stop him from taking the bet. But in the end he just couldn’t walk away.

He took the bet and it wasn’t until he was doing recon on the crew that he realized Johnson had played him. Johnson told him about the crew and that all the high bets were against him. Yet he failed to mention the part where the leader of the Carnage Crew happened to be an old friend of his.

Dominic McCall and Kane go way back. They were both in Special Forces together and Kane once saved Dominic’s life. However Kane went on to meet his wife who took him away from all the killing. And Dominic never got that.

He stayed on right up until the government disavowed his unit. And then he felt like the world owed him something for all his troubles.

So he’s been managing the crew and liked he told Kane who eventually caught up with him – they weren’t killing people for money – in fact it was never about the money. Dominic and his new friends were merely doing anything and everything. Without anyone telling them no. And it was probably that kind of behavior that got the government to turn their backs on them.

Kane had tracked Dominic to a casino, he tried to approach the other man without the game away. But Dominic decided to test him and Cassandra’s cameras didn’t exactly cover everything. It seems the one blindspot she had was the one Dominic found. And he kidnapped Kane the moment he realized he was being followed.

And that went on a villain soliloquy.

Dominic laughed at Kane for trying to settle down with the wife. He said men like them weren’t made for it. And that he was finally happy being himself now. However Dominic wasn’t being completely honest about having no strings attached. For a second there it did seem like he was taking orders. Only Kane never got a chance to hear because breaking out of his restraints and then dodging bullets tended to drown out everything else.

Then, when he did get loose, Kane tried to stop the crew from hitting their last place yet something stopped him. One of the Dominic’s members had strayed too far from the group and so took a hostage when his friends left him behind. But Kane could have gone after Dominic in that moment and didn’t. Instead he chose to save the hostage and by time he got a chance to look up again – Dominic had already left.

Therefore Kane lost the bet. Now Kane didn’t honestly care about the bet but Cassandra can’t continue helping him if the bet’s over. That’s apparently a very important House rule. However Cassandra did tell him that there was still a way he could have access to ADA. And that it wouldn’t be asking for much.

All he had do was get Johnson’s permission to double-down.

Placing a new bet on Kane getting McCall and they could all be back in the game. But Johnson was hesitant. The House had lost once that night and he didn’t think he should back someone who was no longer a good bet. So Cassandra had to essentially talk her boss into believing in Kane.

And once he did, a new bet was in play.

Thus Cassandra helped Kane find out which airfield Dominic was using and then she helped board a flight that was seconds away from lift-away. But the rest was up to him. Kane had to first fight his way to Dominic and he would have brought the other man in alive.

Yet the other man much preferred dying on his terms rather than in prison. So Dominic killed himself and somehow Kane ended up impressing the wealthy and the bored. Johnson found Kane after his wife’s funeral and he told him his tenacity had brought out a lot of bets.

And so Johnson doesn’t want to Kane to walk away anytime soon. Though he knew Alex was reluctant about playing. So he made an offer. He told Alex that he’d help find out where his wife is but that he wanted something in exchange.