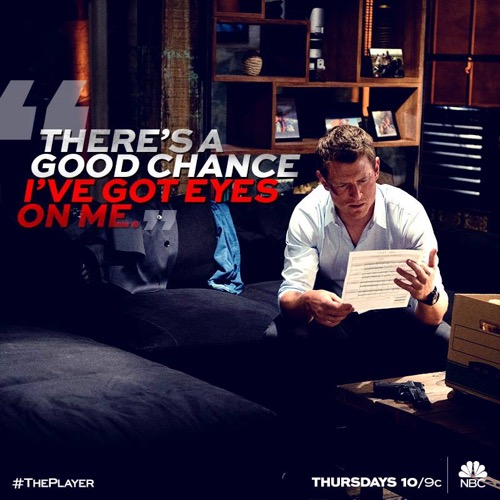 Tonight on NBC their new show, The Player with an all new Thursday October 8, season 1 episode 3 called, “L.A. Takedown” and we have your weekly recap below. On tonight’s episode, Alex (Philip Winchester) asks a friend to further investigate Ginny’s (Daisy Betts) murder, but Mr. Johnson (Wesley Snipes) intervenes.

On the last episode, Alex was ordered to stop a diamond heist, but he encountered an old colleague who was seeking information. Mr. Johnson and Cassandra stepped in and threaten to call off the bets. Later, Alex attends Ginny’s funeral and discovered details surrounding her murder. Did you watch the last episode? If you missed it, we have a full and detailed recap right here for you.

On tonight’s episode as per the NBC’s synopsis, “Alex asks a friend to further investigate Ginny’s murder, but Mr. Johnson intervenes; Alex and Cassandra travel to L.A. to stop a sniper from enacting revenge for a drug cartel; and Det. Brown helps the FBI locate a missing ex-special ops agent in Las Vegas.”

There’s a new bet on the table. Apparently there’s a man the media has taken to calling the Southwest Sniper and he’s killed three people in three different cities within three days. So something like that normally send people into a panic yet for the gamblers – it piques their interest.

Thus the bet this week is “Can Alex Kane stop the Southwest Sniper form killing again”? There’s a lot of money riding on this bet yet that wasn’t why Alex chose to accept the job. He wants justice for the three people that were murdered and furthermore he knows this particular sniper isn’t going down easy.

Each of the victims were shot from 800 to 1000 meters away and Kane only knows about a hundred people in the world that could make shot like that. So he didn’t walk away this bet. In fact he boarded a private jet to Los Angeles with Cassandra just to get this guy.

The last victim, Jamey Cook, was murder on the LA highway. So that’s where Kane needed to go in order to find out all he could about the sniper. Yet before he left, Kane handed off the SM card that Ginny had hidden in a photo of theirs to a trusted friend. This friend had the necessary skills to get everything off the card for Kane but the guys hadn’t counted on Mr. Johnson personally intervening.

See, Mr. Johnson knew that Kane was keeping secrets from him so he went to the friend’s home and knocked the other man just so he could look at what Kane found.

Meanwhile the Southwest Sniper went from 1 out of 100 to 1 out of 10 when Kane found his sniper’s nest. And even then Kane had a pretty guy about who was looking for.

At first, Kane was surprised that someone so skilled would leave such a mess behind in what typical their comfort zone. However once he realized it was a trap then that’s when he knew he wasn’t tracking any old sniper. He was tracking someone from the cartel.

Initially the victims were believed to have been picked at random but after they found out about the cartel angle and that someone went out of their way to kill Jamey that’s when Cassandra and Kane began coming up with a theory. They figured the people that had died must of have witnessed something that they shouldn’t have. And that cartel was simply cleaning house.

And they were almost right. Kane later stopped the sniper from murdering Bob Strum and thus he got the full story from Bob about what really happened on his last vacation. He and a couple of others had come across an accident. There were two cars and everyone inside was found dead. So when they found a bag of cash, Bob and the others decided to split it.

The only one who didn’t partake that day was Bob’s son Jake. Jake hadn’t gone along with the plan of stealing from the dead and he lost all respect in his father when the older man chose to do so. And that’s why the father and son are barely in contact to this day.

But when Kane found Bob, he told him the cartel didn’t differentiate between who took the money and who didn’t. Just because Jake had been thirteen at the time isn’t going to matter to the Cartel. Nor was it going to stop Suarez.

Suarez who was an old acquaintance of Kane was their sniper. So Kane knew how ruthless the other man could be and that stopping him from killing Bob only meant he would try to get to Jake first. And that’s why he relied Kane ended up relying heavily on Cassandra.

He needed a spotter and according to Cassandra that was within the rules. So he located Jake at a concert he was attending and he shielded the teenager when they came across Suarez. However Suarez had enough time to take an innocent woman captive and he demanded that Kane handed over the boy or he was going to shoot the girl.

And thankfully Cassandra came through on her end. Kane ordered to take the shot and she took down Suarez without anyone else getting hurt.

Afterwards, Kane returned Jake to his father and he made have let the kid know that his father helped in tracking him down. But there was still a problem to deal with – the cartel. The cartel wanted Kane’s head for what he did to their best sniper and so Mr. Johnson made them an offer. He gave them two million dollars in a Swiss bank account and reminded them about what happened another gangster that turned the dealer before Mr. Johnson.

Guessing it didn’t go well. Though back in Vegas, Detective Cal Brown got a mysterious phone call from someone from the bureau and the agent apparently wanted him to work on a case off the books. She said she’s his friend matches the profile of several other man that began acting erratically before disappearing. And that she needed someone on the ground in Vegas to investigate.

So Kane might very well be walking right into the trouble and it’s a bit of shock that Mr. Johnson hasn’t found out about this investigation.

He took files from Ginny’s secret SM card and he made it look like she was only keeping things sentimental but otherwise he wasn’t looking into what else might go wrong with Kane.