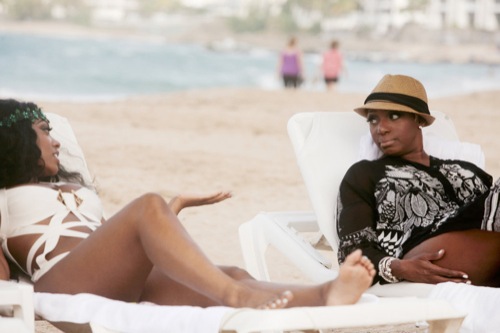 Tonight on Bravo, The Real Housewives of Atlanta continues with an all new Sunday January 11, season 7 episode 10 called “Puerto Read-co” and we have your weekly recap below. On tonight’s episode, NeNe Leakes and Phaedra Parks lend an ear to Demetria McKinney regarding her relationship.

On the last episode, Cynthia and Peter scouted a potential new location for Bar One and began their journey of doing business together. Phaedra continued moving on with her life both professionally and personally while she and Apollo were still living under the same roof. Meanwhile, Kandi decided to host a sex and relationship party for all the ladies, bringing together NeNe and Claudia for the first time under chilly conditions. Later, the night took a turn for the worst, when one of the ladies found out that her significant other hasn’t been as faithful as she hoped. Did you watch the last episode? If you missed it we have a full and detailed recap right here for you.

On tonight’s episode as per the Bravo synopsis, “NeNe and Phaedra lend an ear to Demetria regarding her relationship, leading her to question Phaedra’s sincerity. When the ladies arrive in Puerto Rico, the conversation gets heated leaving NeNe and Claudia in a battle of words.”

Demetria has invited all the girls to an all expenses paid trip to Puerto Rico. In preparation, Claudia is getting her ugly feet fixed, starting with getting the corns removed.

The doctor tells her that it isn’t too bad, but is severe enough that she needs surgery and to wear surgical boots. Claudia decides she doesn’t want to walk around Puerto Rico with surgical boots on, so she’ll just hide her feet in the sand like she always does.

Demetria and Kandi meet up. Kandi feels she owes her an apology for the way she found out about her husband cheating from another woman at the sex toy party. Demetria says her problem was with the presentation, but she respects Kandi is a mogul and didn’t want to ruin the party. She asks Kandi if she misses performing, and Kandi says she’s gotten caught up with other endeavors which has caused the music to be put on the backburner.

Cynthia’s assistant helps Kenya look for a full-time assistant. Afterward, Kenya brings up the way NeNe treated her at the party. Kenya says when she gets around “the beast,” she gets mean and nasty. She thinks NeNe has a hard time seeing other people get over their issues because she can’t do it for herself. She and Cynthia call her a flip flop.

NeNe feels bad about Demetria being blindsided at the party, so she meets up with her at the studio. NeNe tells her she was mad about her behavior at the party and should have stayed to get info on it so she could kick his ass. Demetria tells her she did confront him, and he reminded her he had tried to tell her what he did while they were on a break.

NeNe and Phaedra, who is also there, ask her about her music and what genre she is trying to be. She says her music is just her, and talks about a song she wrote about her relationship. She talks about wanting him to get married with her as they’ve been together eight years, saying she wants to get married knowing he’s sure. Phaedra asks how long he needs to be sure.

The ladies arrive in Puerto Rico. Demetria asks the other women about Phaedra’s behavior in the studio: her crticizing her relationship, telling her to do gospel music, talking about her age and asking if she’s ever done crack when Demetria brought up playing a crackhead in a movie. Kenya is not surprised to hear about this, and because she doesn’t want what happened to her to happen to Demetria, she tells her to confront Phaedra.

Everyone goes to dinner. NeNe and Phaedra have arrived and are coming as well. People are not paying attention to Demetria, who is drinking silently. Demetria talks about her upcoming performance and preparations, and then addresses Phaedra about her remarks at the studio, saying if it is shade she needs to address it. Phaedra says, in regards to her age comments, that a woman of a certain age shouldn’t be a pop star, then Demetria says she is younger. As for her relationship, Phaedra says she is the one talking about her relationship.

Demetria says the only thing they have in common is the number eight: hers has been there for eight, and Phaedra’s is leaving after eight. Phaedra asks if they really have been together for eight years because that isn’t what she’s heard. Cynthia suggests apologizing, and NeNe asks why someone should apologize if they didn’t think they did something wrong. Phaedra gives up and “apologizes.”

Claudia says she’s never seen women act so immature, and that they are being bitchy and catty. NeNe calls her out, saying now she has a mind of her own. Claudia brings up the fact that NeNe used to strip, and NeNe says she did that in her 20s and she is in her 40s (mentioning Claudia is as well). Claudia says they look about 20 years apart in age. NeNe says that Claudia has slept with every guy in Hollywood and is a whore, and that Claudia wishes she had the things she does.