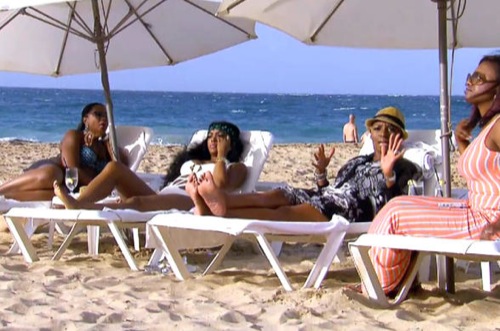 Tonight on Bravo,The Real Housewives of Atlanta continues with an all new Sunday January 18, season 7 episode 11 called “Divide and Ki-Ki” and we have your weekly recap below. On tonight’s episode, NeNe Leakes and Claudia Joran conclude their disagreement at the dinner table, and the group is left completely divided in its wake.

On the last episode, NeNe and Phaedra lended an ear to Demetria regarding her relationship, leading her to question Phaedra’s sincerity. When the ladies arrived in Puerto Rico, the conversation got heated leaving NeNe and Claudia in a battle of words. Did you watch the last episode? If you missed it we have a full and detailed recap right here for you.

On tonight’s episode as per the Bravo synopsis, “NeNe and Claudia conclude their disagreement at the dinner table, and the group is left completely divided in its wake. While some of the women are amused by the whole exchange, others feel as if they are being unfairly victimized. Kandi hosts a beach party in hopes of bringing the women back together, but the peace is short lived on a bus ride to Demetria’s big performance. Claudia is pushed to her limits and reveals a shocking secret about Porsha’s personal affairs.”

Claudia tells her she doesn’t want to have to glue hair to her forehead. NeNe says she shouldn’t talk about her past but talk about the presence, referencing her money and cars. NeNe says she can loan Claudia some fashions because her dress is ugly, and that her own dress is off the runway. Claudia says they don’t make those sizes. She tells NeNe she should have a little less spaghetti in her diet. NeNe calls her weak and tells her to listen to her boss.

Kandi says in the confessional that Claudia has said everything everyone has ever thought about saying to NeNe.

While leaving with Cynthia, Claudia and Demetria, Kenya apologizes for their behavior, saying in the confessional that this event has shown NeNe’s true nature. Claudia apologizes to everyone, telling Kendra she doesn’t want to be that friend who doesn’t know how to act. She says she just couldn’t take the fakeness anymore. Cynthia asks the other women if they saw any of the others at the table go against anything NeNe said tonight.

Back at the table, NeNe, Kandi, Porsha and Phaedra are having a ball making fun of Cynthia. Then, they laugh about Phaedra’s shade toward Demetria.

Kandi’s show is back, and they’re taking it on the road in a couple of weeks. While Cynthia and Kenya are still getting sleep in the morning, Claudia is at the bar getting drinks.

NeNe and Porsha tell Phaedra not to leave after the incident the night before. Phaedra says if she didn’t want her there she shouldn’t have invited her, and that if she’s making someone upset she doesn’t need to be there.

Demetria tells Phaedra that confronting her wasn’t about being mean, and she apologizes for how she did it. Phaedra says she knows she isn’t the type of person to bring up stuff like her relationship with Apollo, and she could have asked about the remarks she had said and Phaedra would have explained.

Kandi has a redo party set up on the beach to put everyone in a good mood. Kandi asks Porsha how her man is doing and when they can meet him. Porsha hesitates to talk about him, saying it’s hard trying to deal with someone out of town.

“I don’t know who Porsha is sleeping with at night,” NeNe says in the confessional. “I just know she is able to date someone internationally and still have a nice car.”

Kandi asks the other women what they say in bed to turn their men on. Porsha says she calls herself names.

The day of Demetria’s performance, Kandi figures if she can keep the two groups of friends separate for the entire day, they can make it to Demetria’s concert without anyone getting in a fight. Claudia, Kenya and Cynthia hang out separately from the rest of the ladies.

Claudia calls out Porsha for laughing at NeNe’s remarks last night, saying that she banged a married African man to get her car. Porsha denies this, and Claudia says she knows because they have mutual friends. Kenya comes in also saying Porsha got her car from this man, and Porsha says she needs to avoid talking about things she doesn’t know about. Kenya says she can’t afford that car on her own, and Porsha says she doesn’t know what she can and cannot afford.
The women arrive at Demetria’s concert late.