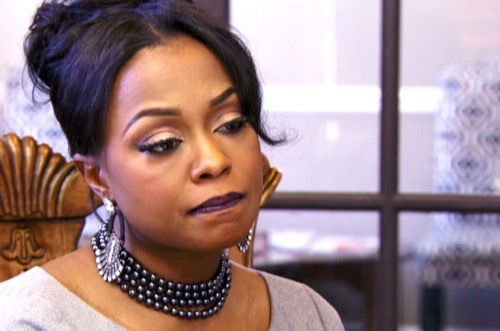 Tonight on Bravo, The Real Housewives of Atlanta continues with an all new Sunday March 22, season 7 episode 18 called “Housewife Interrupted” and we have your weekly recap below. On tonight’s episode, Dr. Jeff leads the women to a breakthrough. NeNe struggles with studying for her Broadway debut. Kenya’s cast reads her script for the first time.

On the last episode searching for a new purpose in life, Claudia decided to pursue standup comedy but quickly realized she was in over her head. Phaedra breaks down to NeNe about her declining relationship with Kandi, leading Kandi to pay her an emotional visit in hopes of deciphering what went wrong. NeNe got the ladies together for an evening of therapy with Dr. Jeff, but things quickly go awry forcing NeNe to storm out of the session and leaving all the ladies puzzled. Did you watch the last episode? If you missed it, we have a full and detailed recap right here for you.

On tonight’s episode as per the Bravo synopsis, “Dr. Jeff leads the women to a breakthrough. NeNe struggles with studying for her Broadway debut. Kenya’s cast reads her script for the first time. Phaedra meets with an attorney to figure out next steps in her life. Claudia decides to continue ushering the girls towards better friendships.”

Dr. Jeff tells NeNe that she can’t leave because it sets a precedent, saying they can’t do this without her. Back in the room, the others wonder why NeNe set this whole thing up just to storm out.

NeNe tells Dr. Jeff he’s taking sides, and he asks her if she has seen him choose sides, which she ignores. He tells her not to let her anger get the best of her, and she says she isn’t angry. She gets into her car with Dr. Jeff calling after her as she is driven off.

When Dr. Jeff returns, Claudia says that everyone in this room wants the same thing, which is not to fight with one another.  Porsha laughs. When asked, she says she hasn’t experienced that in this group, so when she hears it being said, it doesn’t seem real. She asks how anyone is going to let something go when everyone is being fake.

The women share about their past traumas and current emotional struggles. Dr. Jeff says if they can’t understand what trauma they’re bringing to a relationship, there will be issues. Porsha agrees, using Kenya as an example. Kenya says that ever since events in the past, they have never been able to bounce back.

Porsha says she was looking forward to moving forward, which is why she accepted Kenya’s apology. Then, on the bus, Kenya is a part of attacking her. Porsha says that after that she couldn’t believe anything. Kenya then calls her a “revisionist historian,” and Porsha calls on Kandi, who asks why they came at Porsha like that.

Claudia jumps in to talk about the names she has been called. She apologizes for the things that she said in retaliation.
Kenya apologizes to Porsha, saying she’s sorry Porsha felt like being attacked. Dr. Jeff says Porsha was attacked, and Kenya says she would have to receive the same apology back.

Kenya says she understands where Porsha is coming from, and that she accepts her responsibility and would like to move forward.

Dr. Jeff says even if the women do argue, it doesn’t have to be so damn ugly. He asks the women about Phaedra, and Porsha says she was hesitant because of her situation with Kandi. Kandi says she did talk to her and wanted to know why she was talking to NeNe and not her. Dr. Jeff asks if it is worth it to her to reach out to Phaedra again, and she says definitely.

He then asks what the should do about NeNe, and when it is suggested they make a video message, Kandi says no, calling it an ass-kisser move. However, she does videotape the other four women giving the message.

NeNe tells her husband that her intention with the therapy session was to bring everyone together, but she was attacked. NeNe doesn’t appreciate the ladies’ video message, saying that if anyone else apologizes, people can move on, but when she does it’s still brought up ten years later.

Kandi and Cynthia play pool with their husbands and discuss the therapy session. Kandi recounts how she told NeNe that she seems like she’s just trying to mark her territory. Cynthia says she does feel some stuff was resolved in the session.

Kandi brings up the fact that Phaedra didn’t come, saying she was irked by the fact that the therapist brought up the issues between the two friends. She wonders aloud in confessional what Phaedra has been going around telling people to make them believe that they have huge issues.

Phaedra’s friend comes over to her house. Phaedra starts crying, saying her husband would say anything to be mean to her and that her life has been madness, with them getting into nonstop fights. She says now she finally has peace.

Claudia contacts Dr. Jeff via video chat. He asks her what she got out of the therapy, and she says she has learned that she is more patient than she thought and capable of biting her tongue. She also says she has gotten some hope in her friendship with NeNe.

She says she wants to lead by example and work on her issues. Dr. Jeff tells her to suggest that all of the ladies go away on a trip together. She says they tried going out of town together before and it was very divided. He says it will not be kumbaya, but it will help the women connect in some way.

Kenya and Cynthia visit Kandi’s store.  Kenya reveals that after Dr. Jeff, Claudia and Porsha apparently met up to talk about the women all getting together for a trip to the Philippines.

Porsha is supposed to have invited Phaedra on the trip. Kenya asks Kandi if she’s talked to Phaedra, and she says no.

Phaedra meets with her friend, colleague and mentor, Ronne Kaplan. She tells her that Apollo has stated that he would like a divorce. She says she has sent over a few documents and would like to make sure she is protected. Ronne says the prenup looks airtight and that financially, each of them will walk away with everything they have earned. She says her bigger concern is the children, and that they need as much contact as possible with their dad. Ronne suggests they go once or twice to visit Apollo to see how the children do.

Ronne asks Phaedra about her marriage, and Phaedra says that Apollo began to change in recent years. He became really into partying and hanging out, becoming very mean-spirited. Ronne says there are loads of other men she could have married who hadn’t been in prison, asking her how she ended up with someone who had been in prison for five years. She says she married him because she thought he was a changed man, and she knew that he loved her. She says some people do change their lives and make a difference, and she thought he was that person, but she was wrong. She believed that he wanted to be someone different, and maybe he was conning her the whole time. Ronne says it is possible to file the divorce even though he can’t participate, but she suggests focusing on the children first.