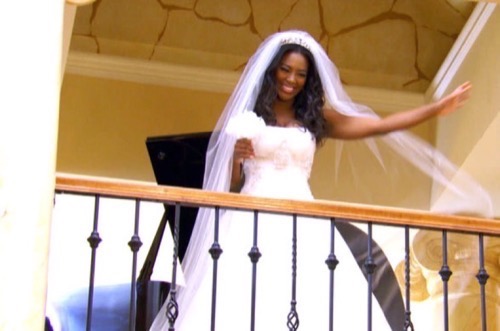 Tonight on Bravo, The Real Housewives of Atlanta continues with an all new Sunday April 19, season 7 episode 22 called “Atlanta Twirls On” and we have your weekly recap below. On tonight’s episode, Kandi Burruss makes a surprise announcement that startles not only her daughter, Riley, but Mama Joyce as well. As Peter and Cynthia Bailey say goodbye to Bar One, they receive a shocking phone call from Apollo in prison.

On the last episode, the ladies returned to Atlanta from the Philippines and immediately got back to work. Kenya was in the midst of shooting her pilot, Life Twirls On, as Cynthia strove to perfect her accent for the role as a Jamaican salon owner. Meanwhile, Kandi and Todd attempted to go on a romantic date, but Todd dropped a bomb that left Kandi torn. Phaedra continued to feel the rippling effect of Apollo’s absence and was inspired to throw a charity event. Things took a turn when NeNe made a cameo from New York and exchanged words with Claudia. Did you watch the last episode? If you missed it, we have a full and detailed recap right here for you.

On tonight’s episode as per the Bravo synopsis, “Kandi makes a surprise announcement that startles not only her daughter, Riley, but Mama Joyce as well. As Peter and Cynthia say goodbye to Bar One, they receive a shocking phone call from Apollo in prison. NeNe rushes through final preparations for her debut in Cinderella on Broadway, and Kenya invites everyone to a screening event of her new pilot Life Twirls On.”

Nene’s Broadway debut is in only two days, and she goes to see the stage she will be performing on for the first time.

Kenya records her voiceovers for her television pilot.

Cynthia and Peter’s bar finally closes after the lease ends, ready to partner together on their new bar.

Since Kandi bought her mom a house, their communication hasn’t been so great. Her mom has decided to throw a big housewarming dinner.

At the dinner, Kandi tells everyone that Todd’s show has been picked up for a second season. She says he will have to go out to California, so she’s been thinking about going out there for a few months. Riley says she doesn’t want to come because she has to go to school. Kandi says she will be going back and forth. Kandi’s mom says she hopes this year will be a better year for everyone, and tells Todd that if she’s said or done anything to offend him or his mother, she is sorry. She also says anything she has said against his mother was something someone told her, not anything she has ever made up.

Todd says in confessional that he definitely doesn’t feel the apology was genuine. “We have a lot of work to do,” he says.

Peter shows Cynthia a place he has rented and wants to turn into a coffee shop. She says their bar is the priority, and she thought all their energy would be focused on that.

While they’re talking, they receive a phone call from Apollo. Apollo says he hasn’t seen his children, but is holding up in prison.

Kenya holds a screening for the pilot of Life Twirls On. Kenya makes her big entrance by appearing at the balcony at the top of the staircase in a giant wedding dress complete with flowers and a veil.

The women receive custom bedazzled popcorn boxes with their names on them and various kinds of popcorn.
Kenya thanks the women for being there, saying she had lost focus on the things that really make her happy, acting and producing.

After the screening, Kenya has costume jewelry laid out for the ladies to put on for keepsake photos. She says in confessional that the fact that the women are all getting along and laughing is a “testament to forgiveness.”

NeNe finally makes her Broadway debut, which is a success. Afterward, she is greeted outside by throngs of adoring fans.

Claudia is considering going on a tour to test out her stand up comedy skills.