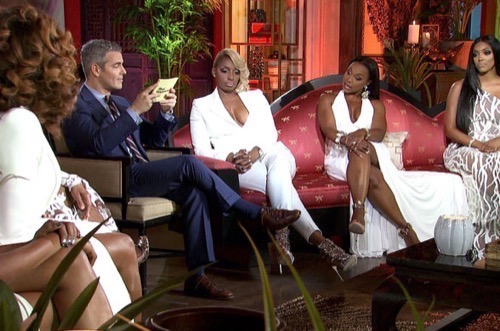 Tonight on Bravo, The Real Housewives of Atlanta continues with an all new Sunday April 26, season 7 episode 23 called “Reunion Part 1” and we have your weekly recap below. On tonight’s episode, Part 1 of 3. The Atlanta ladies reunite to address the dramas of Season 7. Included: NeNe Leakes and Kandi Burruss clash.

On the last episode Kandi made a surprise announcement that startles not only her daughter, Riley, but Mama Joyce as well. As Peter and Cynthia said goodbye to Bar One, they received a shocking phone call from Apollo in prison. NeNe rushes through final preparations for her debut in Cinderella on Broadway, and Kenya invites everyone to a screening event of her new pilot Life Twirls On. Did you watch the last episode? If you missed it, we have a full and detailed recap right here for you.

On tonight’s episode as per the Bravo synopsis, “Part 1 of 3. The Atlanta ladies reunite to address the dramas of Season 7. Included: NeNe and Kandi clash; Phaedra reflects on her emotional season and stuns the group with a revelation; and Claudia and Porsha face off once again.”

Cohen asks Claudia about her fight with NeNe at Phaedra’s charity event, asking why she chose to do it at that time. She says she had to take the chance she could get as NeNe isn’t around much, and that she didn’t want to start drama and was just asking a simple question.

Cohen asks NeNe if she knew Claudia was going to bring up the therapy session, and she says yes, because people blame her for everything. When Claudia starts talking again, NeNe just keeps repeating that she is wrong and Claudia is right, and that she is indeed the problem.

Cohen then asks NeNe about the remark she made about NeNe thinking she’s all that because she was on Broadway for two weeks. Claudia says for someone to act like they’re better than you because they’re working is wrong, and NeNe says she never did that.

Cohen asks NeNe about her subtweeting someone in the cast about the upcoming reunion, calling her a hater. NeNe says the person was Kandi, and Kandi says that if she’s a hater she was just hating on someone who was a hater themselves.

Kandi tells NeNe she doesn’t hate her, but hates her superiority complex. She says she hates when NeNe talks down to people, especially amongst the group. She says they have had problems since last year, and NeNe asks what problems they have had. Kandi says they were arguing at the last reunion and that NeNe had said something about her mother. NeNe denies saying anything about Kandi’s mother.

Kandi says when she and Cynthia stopped being friends, it was okay for NeNe to be friends with her and Phaedra.
NeNe tells Cohen that what prompted the tweet was Kandi’s remark that if Phaedra can forgive NeNe, she certainly can forgive Cynthia.

Kandi says that Phaedra talked to NeNe about her, and both NeNe and Phaedra deny that. Phaedra says that was an assumption Kandi made.

Phaedra says she has not brought the children to see Apollo yet, saying there are restrictions involved and she has a baby. There can be one or two hour waits outside before you can see the person, she says.

Kandi says she has actually been to that prison multiple times, and a lot of families go there and bring their kids. As Apollo is going to be there eight years, he is going to have to see his kids at some point.

Cohen asks Phaedra the status of her divorce, and she says that she is still married and has not filed for divorce. She says her children will see this footage and she wants them to be proud of her, and that contrary to what some people believe, she doesn’t need the money as she has five degrees and can work for the rest of her life.

Cohen asks Phaedra if she was afraid Apollo was going to physically harm her in the episode where she had to change her locks. She says Apollo has a temper and she didn’t know.

He asks if Apollo ever got physical with her, and there is a pause before she says she doesn’t know if she needs to discuss that with him.

Cohen asks Claudia where her relationship with Porsha is. She says that since the trip, they have been getting along better and that she isn’t begging anyone to be friends, but it is for a civil work environment.

Porsha says their relationship is non-existent, and that she didn’t want to be around her because Claudia had been talking about Kenya and she heard that she was judging her for her lifestyle, including having a Rolls Royce.

Porsha says the rumor about the married African man was a complete lie, and that dating a married man is something that goes against her morals. She says that she has been cheated on in her marriage.

Claudia says she’s bullshitting, and that Porsha admitted that she had been waiting on a married man for two years. She says multiple people were there.

Cohen asks Claudia if she knows any of these African men, and Claudia says she knows a man who is friends with one of them. Porsha interrupts her, saying she is going into slander territory, and Claudia tells her to file a lawsuit if she’s about that life.

Porsha says that when she was talking about who she was dating, people would cut her off and add things. She says she was dating a young athlete, whom she won’t reveal because they’re no longer together.

Cynthia says that speaking of cheating allegations, Porsha made accusations about her husband, asking why she would say that when it wasn’t the case. Porsha says she was alone at lunch with Phaedra and it wasn’t something she spread around town. Cynthia interjects and says that it was on a TV show watched by four million people. Porsha says that it wasn’t something she told a bunch of people to then go around and call Peter a manwhore.

Porsha tells her she needs to check with the waitresses at Bar One. She then says she needs to look inside, and is interrupted by laughter.

Cohen asks Kenya about the status of her pilot for “Life Twirls On.” Kenya says they have some negotiations going on for the half-hour comedy, which she financed herself and wants to become a full series.

Cynthia then talks about her experience acting on the show. Cohen asks NeNe what she thought of Cynthia’s acting in the pilot. “It was all right,” she says, followed by a long silence.

Porsha says she will not apologize to Kenya, and that she does not deserve an apology from her at all. She says Kenya said crazy things about her, so she will not make space in her life for her.

Kenya says we are on the 50th anniversary of Selma, and starts talking about her grandfather’s role in the civil rights movement. She says to see his granddaughter refuse to apologize for physically attacking her is upsetting. Porsha says this situation is completely different, and that she felt threatened.

She says Kenya is hurt inside as she has not had love and support in her life like she has, and that she has a lot of compassion but she has to know the person is sitting at the table with her. Cohen says she was, and Porsha says that Kenya’s apology was insincere because she attacked her in Puerto Rico.

Cohen asks Phaedra for her input on this. Phaedra says that she thinks it’s irresponsible for Kenya to make that comparison because she doesn’t see her being a good representative for black women, and then Kenya goes on a rant about Phaedra walking around with her ass out.

Phaedra says there are plenty of whores in the Bible, and that she is in good company.

Cohen asks Kenya if she thinks she’s a better representative for black women than Porsha, and she says yes, because she has internalized the lesson of forgiving others for herself.

Kenya says that if she were a whore, there would be a museum where people could go and look at her and say “You know what? That was the best goddamn whore I ever seen in my life. That bitch did that. She did that.” She says they would have a star on the Hollywood Walk of Fame for her being such a whore, and that she would own that unlike Phaedra.